Eleanor of Aquitaine on Crusade

“I dressed my maids as Amazons and rode bare-breasted halfway to Damascus. Louis had a seizure and I damn near died of windburn, but the troops were dazzled.”
Eleanor of Aquitaine in the 1967 film “A Lion in Winter” starring Peter O’Toole and Katherine Hepburn. 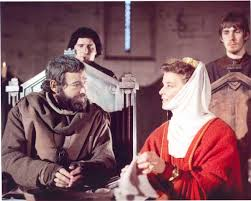 As with most good historical fiction, there is more than a grain of truth to this fictional line from The Lion in Winter. Not only did Eleanor of Aquitaine take part in the Second Crusade, her role soon became  controversial and her participation precipitated a marriage crisis. Here is a summary of what happened.

In 1144, the crusader county of Edessa was overrun by the atabeg of Mosul, Zengi.  The news shocked Western Europe and Pope Eugenius III called for a new crusade. St. Bernard of Clairvaux enthusiastically took up the call, and at the pope’s bidding preached the crusade far and wide, including on Easter Sunday in Vezelay, Burgundy.  Here King Louis VII of France knelt before the abbot and took the cross to the thunderous cheers of his vassals and subjects. When he finished, his queen, Eleanor of Aquitaine, knelt beside him and likewise took the cross.

Eleanor did so as the Duchess of Aquitaine and Countess of Poitou – not as Queen of France. The importance of her gesture was to muster support among the barons and lords who owed her, but not Louis of France, homage.  However, Eleanor’s example inspired many other noblewomen to take the cross as well.
When King Louis’ crusaders set forth on their crusade, the estimated 100,000 French included an unnamed number of ladies – or “amazons” as some liked to call them – determined to take part in the crusade themselves.  Far from being Eleanor’s “maids,” most of these women were the wives of noble crusaders, wealthy enough to afford horses and armor, since according to a Greek chronicler writing some fifty years after the event, they rode astride and wore armor.  They were also accompanied by servants and a great deal of baggage.

Eleanor’s Tomb at the Abbey of Fontevrault
Posted by Helena P. Schrader at 12:00 AM