A Soldier’s Assessment
Richard the Lionheart: The Mighty Crusader
By David Miller 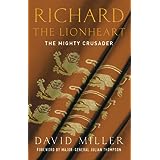 This book is a military man’s assessment of the military capabilities of Richard I of England. It does not attempt to analyze his capabilities as a politician or monarch, much less a son or husband, as the excellent forward by Major General Julian Thompson warns. As such it delivers very well indeed.

Miller first provides the context of Richard’s campaign in the Holy Land, then a chronological account of it, and finally looks at his achievements by topic (combined operations, logistics, command).  Perhaps because I was familiar with the events, I found the analysis in the last three chapters most useful.

While not a biography in the sense of providing the life story of its subject nor in-depth insight into what made Richard Plantagenet do what he did, it is a very useful supplement to other biographies. I highly recommend this book to anyone seriously interested in the period, or military history generally.  It is particularly valuable because it highlights just how sophisticated and complex the crusades were and debunks notions that all medieval armies were little more than rabble and egotistical knights errant. After reading this book, my respect for military leadership in the middle ages increased significantly, and I look forward to applying many of the things I learned to my novel on Balian d’Ibelin. 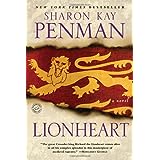 Penman is a first-class historical novelist whose novels are always based on meticulous research. She excels at biographical novels, as her debut novel The Sunne in Splendour, a brilliant, nuanced and plausible portrayal of Richard III, demonstrated.

In “Lionheart” she tackles a character less controversial than the last Plantagenet, but one who has become lost behind the legend or the “brand.” Almost everyone, as Penman points out in her “Author’s Note,” has heard of Richard the Lionhearted, but almost no one knows anything about him. We simply think we do.

Penman succeeds in making Richard a complex, multi-dimensional character, with strengths and weaknesses. She convincingly lays to rest some of the more destructive legends – Richards’ homosexuality, his “heartless” brutality at Acre, his overweening pride, and his alleged lack of intelligence or subtlety. By the end of the novel, I sincerely liked Richard, sympathized with him, and understood his behavior better than at the start.

Yet in a way that was the problem: I only started to understand and like Richard towards the end of the novel. It took me so long to see Richard, because Penman clutters the book with seemingly hundreds of superfluous characters that detract from him.  The book is bogged down by plot splinters, too small and inconsequential to be called fragments. All these superfluous characters and sub-plots clog the flow of the narrative.  Richard’s historical accomplishments in the short time-span of the novel were stupendous, and we ought to be sitting on the edge of our seats, unable to put down the book until we’ve finished reading it. Instead, it took me nearly nine months to read, and it was only in the last hundred of the nearly six-hundred pages that I was finally gripped by the novel.

While I understand Penman’s desire to give credit and space to some of Richard’s contemporaries and companions-in-arms (and his enemies!), I found myself irritated by sub-plots with completely fictional characters. For example, why open the story with a dramatic shipwreck seen through the eyes of a frightened girl, if that girl is not going to play any role in the novel? She’s hardly even mentioned in the last nine tenths of the book and is not a historical figure. Yet other characters, like Henry of Champagne, are simply names without personality until the final chapters.  Penman should have given this important characters more prominence early in the book, so we could understand and care about them later on.

Altogether the book read like a rough draft, the first out-pouring of creative energy by an author still strongly influenced by recent research.  Penman appears to have tried to fit in everything single historical fact that she discovered so that in the end she has got her history right at the expense of a clear story-line and momentum. At the same time, Penman apparently wanted to retain characters from earlier novels to provide continuity, while adding some new ones at the beginning that she really didn’t need. “Lionheart” would have benefited from a rigorous re-write, focused on eliminating the superfluous, fleshing out the central characters, and creating a leaner, faster-paced book.  Penman can do better than this, and Richard deserves better.

Richard the Lionheart is a major character in the third book of my three part biography of Balian d'Ibelin:

Book I: Knight of Jerusalem was released in September 2014.