One of the most impressive and visible legacies of the crusader kingdoms were the castles erected by Latin rulers in their territories. 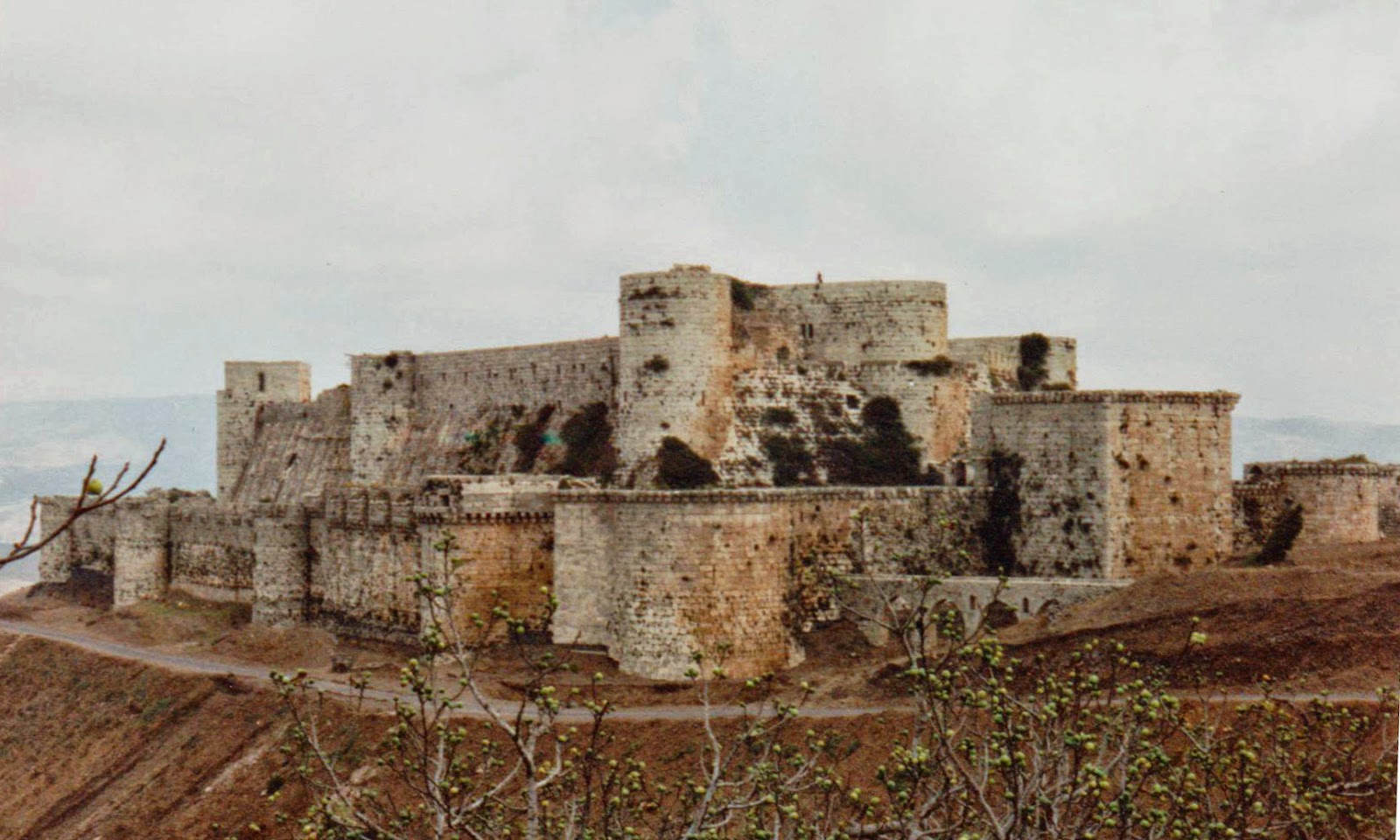 One of the best preserved crusader castles: Krak de Chevaliers

T.E. Lawrence, famous as “Lawrence of Arabia,” disparaged the crusader castles as irrelevant and ineffective because these fortifications ultimately proved incapable of preventing the fall of the crusader kingdoms. Yet this is too facile a judgment. In fact, the crusader castles enabled numerically small fighting forces to withstand repeated invasions by numerically vastly superior armies. Christian defeats in the first hundred years of the crusader kingdoms occurred almost exclusively in the open field, where Muslim leaders could bring their larger forces to bear, e.g. the Field of Blood (1119), Hattin, (1187). By contrast, when the crusaders retreated into their fortified cities or castles, forcing the Saracens to besiege them, they usually survived to fight another day.


Yet even the strongest walls require defenders and when a castle like Krak de Cheveliers, built to be defended by 2,000 knights, has a garrison of only a few hundred, it becomes indefensible. Outremer was not lost because its castles were irrelevant or ineffective, but because its castles could not be used as intended due to inadequate and dwindling manpower.

It is also important to remember, that crusader castles were not merely border fortresses designed for the defense of the realm against external enemies. They were also administrative and economic centers, symbols of royal/baronial power, residences, and places of refuge.  As in Western Europe, castles came in different shapes and sizes, each reflective of the original and evolving purposes of the castle and the wealth and power of respective patrons.

Adrian Boas, in his excellent work Crusader Archaeology: The Material Culture of the Latin East, identified no less than five basic types of crusader castles. The simplest form of castle was a simple tower. Similar castles were already known in the West and became popular, for example, in Scotland. In the crusader kingdoms, such castles were usually square with a windowless cellar/undercroft used for storage, wells and or kitchens, over which were built two floors topped by a crenolated fighting platform on the roof.  Access from the outside was usually only at first floor level by means of an exterior stair that ended several yards away from the door; the gap was bridged by a wooden draw-bridge that could be closed from the interior to cover and so reinforce the door. Each floor had two or more barrel or cross-vaulted chambers, which might have been further partitioned by wooden walls or roofs/floors. Out-buildings containing workshops, storerooms, stables and the like were located around the foot of the tower but were not themselves defensible. A splendid, although late, example of a crusader tower castle is the Hospitaller castle at Kolossi on Cyprus. 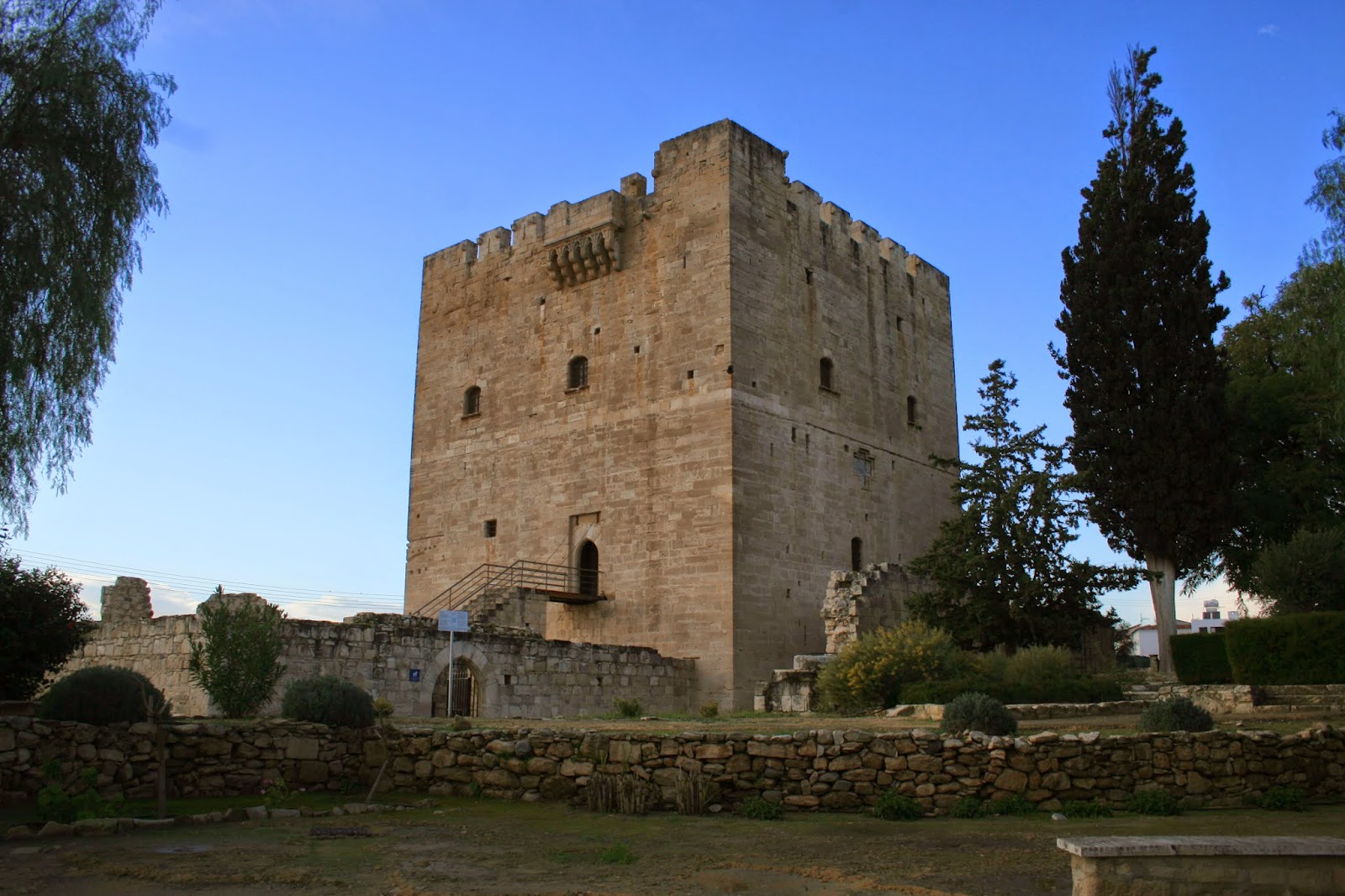 A second type of crusader castle, the castrum or enclosure castle, had their roots in Roman military architecture and evolved from Roman forts via Byzantium into crusader castles consisting of a defensible perimeter with reinforcing towers at the corners. The concept was similar to creating a ring of wagons behind which pioneers in the “wild west” defended themselves from attack by Indians or outlaws. The Muslims had also adapted this type of defensive structure, and on their arrival in the Holy Land the Franks took over a number of existing castles of this type. In addition, they built a number of castles following this design for themselves, notably Coliath in the County of Tripoli, Blanchegarde, and Gaza in the Kingdom of Jerusalem. These castles had large vaulted chambers with massive walls roughly three meters thick running between the corner towers. These housed the various activities necessary to castle life from kitchens and stables to forges, bakeries and bath-houses. The upper story of the enclosing buildings generally held accommodations, eating halls and chapels for the garrison. The roofs of the buildings were the fighting platform facing out in all directions and reinforced by the corner towers that provided covering fire.


The third type of crusader castle was a combination of the previous types: a strong roughly rectangular complex built around a tower or keep.  The enclosing walls (with their vaulted chambers) and corner towers formed the first line of defense and the keep the second. A surviving example of this kind of castle is Gibelet (Jubayl) in the County of Tripoli, and based on William of Tyre’s descriptions the royal castle at Darum in the Kingdom of Jerusalem was of this time.


As the Franks became wealthier or the threat became more intense the Franks started building outer works to provide a line of defense in beyond (i.e. before) the castrum containing so many vital parts of the castle’s inner life. These outer works may have originally been intended to provide a modicum of protection to the towns that often grew up around castles, but they soon evolved into what became one of the most distinctive, indeed iconic, type of crusader castle: the concentric castle. These were generally the castles of the military orders, built with the huge resources available to them and were more purely devoted to military dominance rather than the castles of secular lords or royal castles. These were the castles that inspired Edward I’s castles in Wales. In addition to Krak de Cheveliers, a famous example of this type of castle was Belvoir, overlooking the Jordan valley. Belvoir held out against Saladin a year and a half after the Battle of Hattin; Krak he never even tried to assault, deeming it too strong.

Boas distinguishes between hill top and spur castles, but both of these castles were essentially castles that took advantage of natural geographic features to strengthen the overall defensibility of the castle. The hill-top castles and mountain spur castles were built on the top of steep slopes either occupying an entire hill-top of the tip of a longer corniche. They were undoubtedly the most difficult to take by storm since, built on bedrock, they were hard to undermine, and built on steep escarpments they were almost impossible to assault. Kerak, the castle of Reynald de Chatillon, was a spur castle and it withstood two unsuccessful sieges by Saladin, falling only to starvation more than a year after the Battle of Hattin. 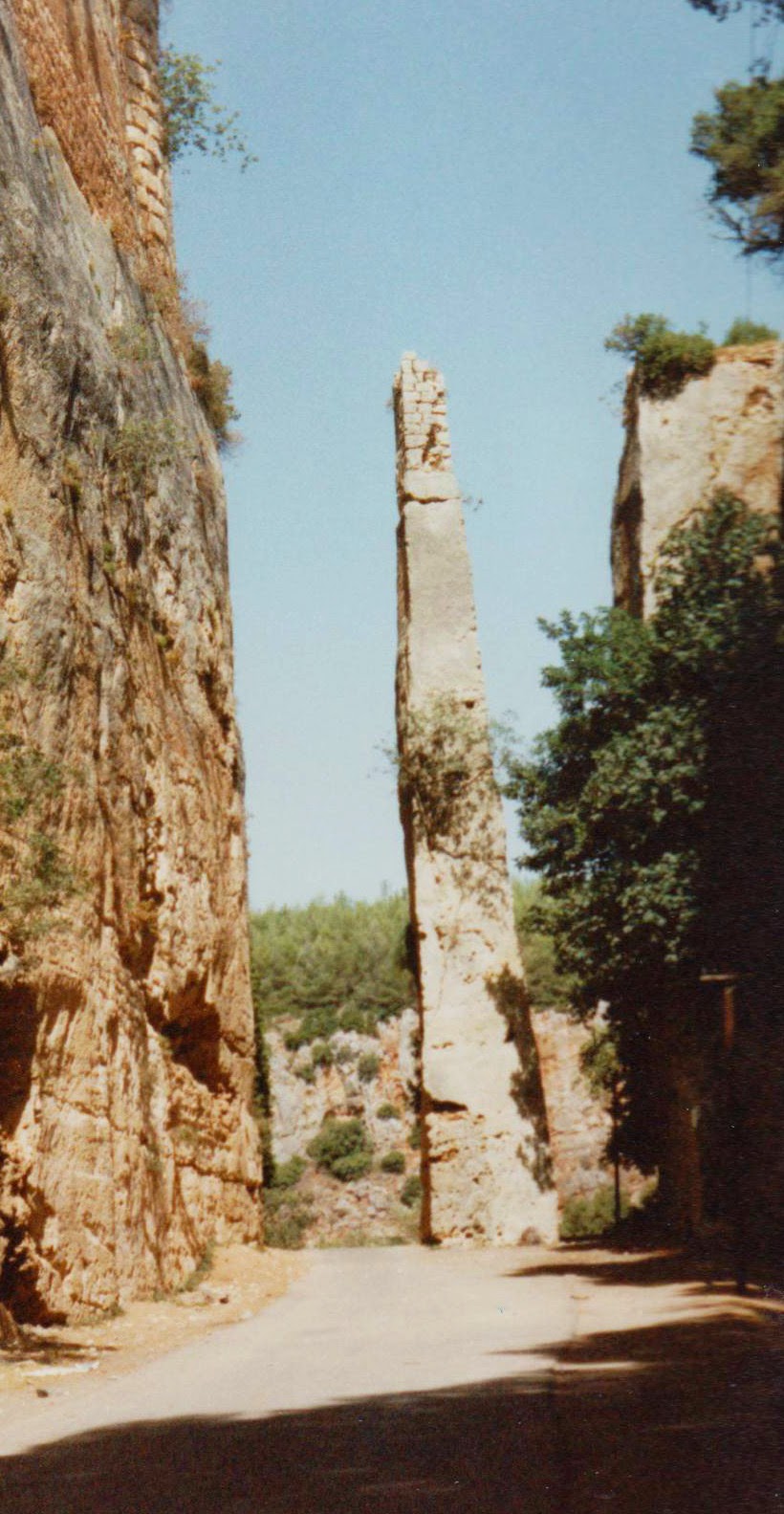 The fosse at Margat, showing the pillar that supported the drawbridge.

A variation on the theme of the spur castle was the use of the sea rather than sheer mountain sides to provide protection. The Templar castle of Atlit Castle (Castle Pilgrim) and the castle at Tyre were both built on peninsulas extending into the sea and only accessible on one side from the land.  These castles proved almost impossible to capture as again, mining was impossible from three sides and assaults from boats were very precarious and difficult to carry out. As a result, a much smaller defensive force could hold such castles since only one side was vulnerable to attack and only a light watch was needed on the other three sides. Tyre became the only city in the Kingdom of Jerusalem that successfully resisted Saladin after the Battle of Hattin and became the base from which the coastal plain was reconquered.

Which seems a fitting place to end this brief description of crusader castles.

Crusader castles play a role in my three part biography of Balian d'Ibelin: