The Knights of St. Lazarus 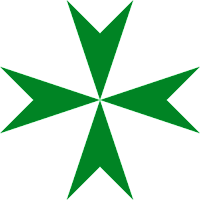 The most famous of the “fighting orders” or militant orders were of course the Knights Templar, and the Knights Hospitaller (Knights of St. John), two orders founded in the Holy Land and, for their age, truly international in character. Although not powerful and largely forgotten, there was a third military order also founded in the Holy Land, the Order of St. Lazarus.

Critical to understanding the Knights of St. Lazarus is the fact that leprosy was far more common in the East than in Western Europe and the influence of Greek Orthodox ideology on the territories of the crusader states. By the end of the 10th century, the Byzantine clergy had come to see leprosy as a "holy disease" -- its victims were not seen as particularly vile sinner but rather as men and women marked by God's favor. A number of Greek Orthodox legends entailed Christ appearing as a leper. Caring for lepers was therefore seen as an act of great charity that would gain a person credit in heaven.

It is probably not surprising, therefore, that the Order of St. Lazarus grew rapidly in the mid-12th century, eventually having houses in Tiberias, Ascalon, Acre, Caesarea, Beirut, and possibly other cities as well. More surprising, however, is the fact that it began to have military brethren.

It appears that initially, the role of these armed monks was primarily the defense of the leper hospitals. Some of these military men were undoubtedly former Templars and Hospitallers who had contracted leprosy, because we know that both the Templar and Hospitaller Rules required members with leprosy to join the Order of St. Lazarus. However, secular knights of the crusader kingdoms who contracted the desease were also expected to join the Knights of St. Lazarus.

Knights already afflicted with disease would have been facing a steady deterioration of their fighting capabilities, however, and it appears that just as some healthy monks and nuns devoted themselves to the care of the sick in the habit of the Knights of St. Lazarus, some healthy fighting men likewise chose to join the Knights of St. Lazarus rather than the more powerful (and arrogant) military orders of the Templars and Hospitallers. This supposition is supported by the fact that there are recorded incidents of the Order of St. Lazarus taking part in military operations – possibly at the Battle of Hattin, and certainly at the Battle of Gaza in 1244, at Ramla in 1253, and during the defense of Acre in 1291.

Meanwhile, in 1265 Pope Clement IV issued a papal bull that commanded all the prelates of the church to assist in transferring the care of all lepers -- male and female -- to leprosariums run by the Knights of St. Lazarus. Pope Clement had taken a strong interest in the care of lepers before he became pope, and had written a set of regulations for leprosariums while still Bishop of Le Puy that included such remarkable features as the right of lepers to elect their own superiors from among their members. As pope, however, he seems to have been most concerned with ensuring that lepers remained segretrated from the rest of society by putting them under the control of the Knights of St. Lazarus.

Thus after the fall of Acre, the Order of St. Lazarus moved its headquarters to Cyprus, abandoned all military activities, and thereafter concentrated on its mission of providing comfort and care for the victims of leprosy until the mid-14th century. Of all the so-called militant orders, arguably this was the "most Christian."

Find more about life in the crusader states in The Jerusalem Trilogy: