Review: "The Templars: Knights of Christ" by Pernoud

Continuing with the series on the Knight Templar intended to counter the misinformation and sensationalism of the "Knightfall," guest blogger Rand Brown II highlights one of the best books about the Knights Templar available. 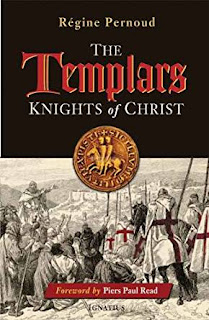 “History is a novel that has been lived” the French literary aficionado Edmond de Goncourt once wrote.  For sure, the historical narrative offers a staggeringly rich selection of the very best drama, tragedy, intrigue, and even horror to be found – provided one bothers to look for it.  However, there are not a few stories in which fiction has thoroughly eclipsed the truth – so much so that it is nearly impossible to encounter those stories without being overwhelmed by centuries-worth of misconception and outright fantasy.  So it is with the Poor Knights of Christ and of the Temple of Solomon, more widely known in both their day and our own as the Knights Templar.

Founded in 1118AD by a poor knight-pilgrim from Champagne for the sole purpose of defending the pilgrim routes in and out of the Holy Land freshly claimed by the Latin crusaders, the Order would experience a swift rise and fall in fortunes rarely seen in human history.  Attracting thousands of knights to its cause, the Templars would become one of the most elite military forces in Latin Outremer due to the potent combination of a strict rule of discipline often not seen in standard medieval armies, a tightly-knit organizational structure, and an operational independence from any other party’s command other than the Pope himself.  In addition, their counterparts back in Europe established a financial support network that quickly became the first supranational banking system in the West.  At the height of their operations, the Templar Order served as the custodians of entire royal treasuries deposited within their commanderies.

However, after not even two centuries of existence, the Order was beset upon from all sides by both secular rulers (one in particular) and the very Church it had so faithfully served.  In 1312, the last Grand Master, Jacques de Molay, was burned at the stake in Paris on spurious charges of heresy and the Knights Templar vanished almost as quickly as they appeared.
Human nature has an inherent attraction to the mysterious and the fantastical and the embers of de Molay’s pyre had not even gone cold before all sorts of conspiracy theories and esoteric myths about the doomed Templars began to circulate.  This phenomenon only gained momentum as the centuries went on – by the time of the so-called Enlightenment, the Templars were the at the center of all sorts of bizarre and ahistorical mythologies, all bent on uncovering gnostic “secrets” and treasures wholly fabricated by the very cultists peddling them.  In our own times, the grotesque esoteric nonsense surrounding the Knights Templar continues seemingly unabated as seen in various Masonic pseudo-occultism, best-selling fiction novels, the film industry, and even popular video game series.  In all this pathetic fiction, the serious student of history may be tempted to despair that there is anyone who can push aside the fantasy so that the real Knights Templar can indeed stand up.  Fortunately, such a person did exist.
Régine Pernoud (d. 1998) was perhaps one the foremost medievalists both in her native France and far beyond.  She wrote on a wide variety of medieval topics, including St. Jeanne d’Arc, the role of women in medieval society, and the Crusades - usually with the stated goal of clearing up modern misconceptions regarding them.  In 1974, she sought to confront head-on the gross misconceptions surrounding the Templar Order and to historically rehabilitate them as the impactful organization that they truly were.

In doing so, Pernoud sticks strictly to the historical facts drawn from primary source materials, of which she was a master of in her life.  She covers in detail the origins, rule, and daily operations of the Order – shedding light on the dually religious and military life these knightly monks led, unique even in their own time.  In recounting their service in Frankish Outremer, Pernoud helps the reader see the Templar through the eyes of both their fellow Latin Christians and their Islamic foes – both of whom simultaneously feared and admired the Order’s impressive reputation on and off the field of battle.  She also uncovers the fascinating details of the Templar’s banking activities back in Europe and the how various powers in Christendom, both secular and clerical, became financially beholden to the Order in one way or another – something that would play a major role in their downfall.

Pernoud ends her richly detailed, but concisely worded work with a masterful analysis of the Order’s sudden collapse at the dawn of the 14th Century.  In a narrative that reads almost like a crime thriller, Pernoud reveals the deliberate coup against the Templars orchestrated by King Philip IV of France and his even more dispicable apparatchiks.  These were the devious Keeper of the Seals, Guillaume de Nogaret, who harbored an obvious hatred for the Order and possibly the Church as a whole,  and the Machiavellian chamberlain, Enguerrand de Marigny, who shared his king’s neo-statist desire for consolidated royal power.  The independent and powerful Templars were viewed a sincere threat.  There was the additional allure of the Order’s vast financial holdings – a tempting acquisition King Philip, mired in several costly and indecisive wars with England and Flanders, simply couldn’t resist.

Throughout the ordeal, the Church was outmaneuvered and outright dominated by French royal power-politics. Ultimately, the Pope shamefully abandoned the very knight-brothers who had so faithfully served the Church for nearly two hundred years.

Pernoud’s excellent assessment of the Templar’s fate and the injustice behind it was later vindicated by the discovery and translation of the Chinon Parchment in 2007 that prompted Pope Benedict XVI to formally absolve the Templar Order of the charges levied against it exactly eight hundred years prior.  No matter how long the truth is obscured by obscene myth and misconception, eventually, the truth will pierce the veil.  Régine Pernoud accomplishes just that and her work is a must-read for anyone who wishes to speak with authority on the Poor Knights of Christ and the Temple.