The Teutonic Knights Part III: Twilight in the Holy Land

The Teutonic Knights had been granted the permission to colonize Prussia in 1226, but for decades they had still prioritized the Holy Land. The Mongol threat to Europe, however, had forced the Teutonic Knights to increasingly divert resources to the Baltic frontier. What began as a necessity, however, gradually -- perhaps even unconsciously -- became policy. Today Dr. Schrader looks at the last years of the Teutonic Order in the Holy Land. 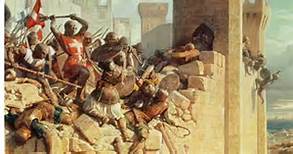 In 1254 Pope Innocent IV granted the Teutonic Knights the right to give secular knights willing to fight the Mongols the same spiritual privileges as those who took the cross to fight in the Holy Land. The fight against the Mongols was effectively raised to a “crusade.”  Even recruits to the Teutonic Knights were no longer required to serve first in the Holy Land; they could go into service directly in the Baltic.  Increasingly, German knights and noble families turned their attention to the Baltic, and after 1250 there was never again large contingents of armed pilgrims to the Holy Land.


Not that the Teutonic Order entirely gave up on the Holy Land. It was in the last half of the 13th century that the Order made a number of major acquisitions.  Yet significantly these came primarily through purchases from the secular lords of Outremer. The Baron of Sidon essentially gave up entirely, selling his lands to the Templars and Teutonic Knights. Even John d’Ibelin, Count of Jaffa and Ascalon (son of Philip d’Ibelin the former regent of Cyprus, grandson of Balian d’Ibelin, the defender of Jerusalem in 1187) sold or leased entire lordships and castles to the Teutonic Knights. After the Battle La Forbie (1244) an exodus of ordinary people out of the remaining crusader states had started. Hope of a Christian recovery was waning.


It appears that the fall of Montfort was a turning point in the policy of the Teutonic Knights. It is significant that shortly after the loss of the stronghold, [the Master of the Teutonic knights] Arno [von Sangershausen] created new castle named Montfort in Prussia. (Morton, p. 125)


Thereafter, no master of the Teutonic Knights spent much time in the Holy Land either. The focus had shifted definitively and finally to the Baltic frontier.


In the final two decades of crusader presence in the Levant, the Teutonic Knights cooperated played a cooperative and supportive role, often mediating disputes between other actors, but nothing could stop the juggernaut of Mamluk aggression. When Acre fell in 1291, the Teutonic Knights, like the Templars, died to the last man. The HQ of the Teutonic Knights was moved initially to Venice and a presence was maintained on Cyprus until at least 1300, but before long the HQ moved to Marburg and the Teutonic Knights focus turned exclusively to the Baltic theater.

Discover the crusader states at the end of the 12th century in Dr. Schrader's award-winning novels set in Outremer:

Email ThisBlogThis!Share to TwitterShare to FacebookShare to Pinterest
Labels: Fall of Acre 1291, last years of the crusader kingdoms, Teutonic Knights