Of the many "militant orders," the Knights Hospitaller, were the oldest and the most enduring.  Today I pay a tribute to them with a short summary of their history. 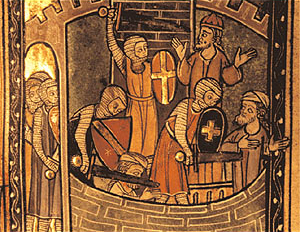 The roots of the Knights of St. John of Jerusalem go back before the First Crusade. In about 1070, a hospice for pilgrims was established near the Church of the Holy Sepulcher with funds from Italian merchants and staffed by Benedictine monks and nuns. Although the Benedictines were expelled from Jerusalem before the arrival of the first crusaders, they returned after Jerusalem was in Christian hands, and with help from the Christian secular authorities, re-established a hospital. Soon, further grants of money and land from the Christian lords enabled the monks to establish a chain of hospitals throughout the Holy Land and to set up hospices at the embarkation ports for pilgrims setting out from Europe or returning from Outremer. The monks and nuns running these hospitals and hospices soon became known as the “Hospitallers.”

In 1113, the monks of the Hospital (also referred to as the Brothers of St. John and the Brothers of the Holy Sepulcher) requested and received from the Pope the right to become an order in their own right. This new order, as with the Templars a decade later, was made directly subordinate to the Pope, and in or about 1130 it adopted the Augustine Rule. Meanwhile, this new order was rapidly acquiring significant donations in land and treasure in both the West and in the Holy Land, a reflection of the undiminished support for a Christian-controlled Holy Land.

Nevertheless, the Hospital of St. John remained a traditional monastic order. Although it had been granted the explicit right to defend its properties and pilgrims, members of the Order were prohibited from bearing arms. As a result, throughout the 12th century the Hospital was dependent for its protection on knights who owed feudal duty to the Hospital via their landholdings, voluntarily offered their services, or were hired mercenaries. These defensive forces, whatever their source, must have been substantial, however, because the Hospital was given very powerful fortresses, notably the most impressive crusader castle of them all: Krak des Chevaliers.

It would have been pointless to turn over such vitally important military resources to an order incapable of maintaining and defending them, but the exact status of the Hospital’s fighting men remains obscure until 1206 when the Hospitaller Rule was changed to allow for fighting monks. Thereafter, the Hospitallers began to recruit fighting men, probably starting with those who were already associated with it in some way, and like the Templars, they had both knights (men of noble birth) and sergeants. Within a very short time, the knights dominated the Order. The Hospitallers, however, continued to have priests, monks, and nuns devoted solely to the care of the sick, and the network of hospitals was not abandoned. At about this time, the entire Order adopted black robes (reminiscent of their Benedictine origins) adorned with a white cross. One notable difference with the Templars, however, was that there was no distinction in dress between the knights and the sergeants of the Hospital.

The similarity between the two powerful militant orders led to open rivalry between them for recruits, resources, and power in the first half of the 13th century. This led on occasion to open fighting between members of the orders on the streets of Acre and Tripoli, but more often to subtle maneuvering behind the scenes. For decades, the Hospitallers and Templars consistently backed rival claimants to the throne of Jerusalem and rival Italian trading communities. As the end of Christian Palestine neared, however, the Hospitallers and Templars put aside their differences and jealousies to rally to the now lost cause. In the last decades of Christian Palestine, Hospitallers and Templars fought side by side, ferociously and futilely, at Antioch, Tripoli, and finally Acre.

After the fall of Acre, the Hospital also relocated its headquarters to Cyprus, but conflict with the King of Cyprus convinced the leadership of the Hospital (evidently more flexible, imaginative, and analytical than the tragic Jacques de Molay) of the necessity for independence from secular authority. The Hospitallers undertook the capture of the island of Rhodes from Turkish forces in 1306, finally seizing the capital city in 1309. With this move, the Hospitallers removed themselves, and the bulk of their movable treasure, from the grasp of Philip IV – or any king inclined to follow his example. Even more important, however, from this island base the Hospitallers built up a powerful fleet capable of challenging the naval power of the Turks and of launching hit-and-run raids into Saracen territory. The Hospitallers had “reinvented” themselves and had found a new justification for their existence.

The Hospitaller fleet remained a significant force protecting Christian shipping and commerce throughout the next two and a half centuries. The base of this fleet on Rhodes, so close to the Turkish coast, was a constant provocation to Turkish, rulers. Numerous attempts were made to capture Rhodes, notably in 1440, 1444, 1480, and 1522. During the first 3 sieges, the Hospitallers withstood vastly superior numbers, in one case (1444) driving off the enemy with a daring sortie from within the city. On the other two occasions, they were rescued by the timely arrival of a relieving fleet from the West. In 1522, an army allegedly 100,000 strong attacked a force of just 600 knights and 4,500 local auxiliaries. After 2 months of bombardment a breach in the landward wall was made, yet 3 assaults through the breach, carried out with complete disregard for casualties, failed. Sultan Suleiman called off the costly assaults and settled down for a long siege, cutting Rhodes off from all relief. Recognizing the hopelessness of their situation, the surviving Hospitallers, now more commonly called Knights of St. John, surrendered on honorable terms. 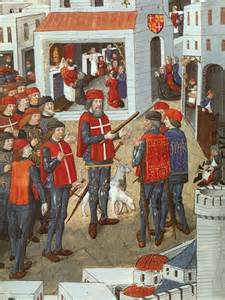 When the Hospitallers withdrew on their ships from Rhodes, they were effectively homeless, but Emperor Charles V offered them the island of Malta as their new headquarters. From here they continued to operate their fleet so effectively that Sultan Suleiman decided he had to dislodge them from their new home. In 1565 he again assembled a large siege force. The Knights of St. John had 500 knights of the Order and 10,000 other troops. The Turks launched their first attack in May and after a month of fighting captured an outlying fort, slaughtered the garrison, and floated their mutilated bodies across the harbor to the main fortress as a warning of what was to come. The Hospitallers replied by executing Turkish prisoners and catapulting their heads into the Turkish camp. A Turkish assault on the main fortifications was undertaken on July 15, and a breach in the walls effected by August 7. Yet two assaults through the breach, on August 19 and 23, both failed. On September 7 a Spanish fleet arrived from the West and scattered the demoralized Turkish forces. The defense of Malta had cost the Hospitallers half their knights and 6,000 of the other defenders.


Thereafter, the Knights of St. John focused again on making the seaways of the Mediterranean safe for Christian shipping, a task that became increasingly easy as Turkish naval power declined. But this victory, like the defeat in Acre 300 years earlier, robbed them of their raison d’être. The Knights of St. John, now commonly known as the Knights of Malta, slid into a slow decline. They became more involved in commerce than warfare, and their fortresses turned into palaces. When Napoleon laid siege to Malta in 1798, the last frail remnants of the once mighty Hospitaller Order surrendered in just two days.

The Hospitallers played an important role in the Holy Land in the 12th century and so also figure in my biographical novel about Balian d'Ibelin and the fall of the Kingdom of Jerusalem.