The Impact of the Crusades on Trade in the Middle East

Prior to the crusades, the coastal ports of the Levant had fallen into a period of neglect and decay. Trade between the various parts of the Seljuk Empire moved primarily overland, as did trade across North Africa. The Mediterranean remained a contested area with Arab pirates from North Africa endangering European and Byzantine shipping — and vice versa. The great trading ports were Alexandria and Constantinople. All that changed with the establishment of the crusader states on the mainland of the Levant (1099–1291) and on Cyprus (1192 —1571).

These states revived the coastal cities of the Levant, especially Acre, Tyre, and Tripoli, but to a lesser degree Jaffa, Caesarea, Haifa, Sidon, Beirut, and Latakia. Following the fall of Acre to the Mamluks in 1291, Famagusta in Cyprus became the central trading post of the Eastern Mediterranean.

From roughly 1123, when the Venetians destroyed a large Fatimid fleet, until the rise of the Ottomans, the Mediterranean was dominated by Western naval power. In the 12th century, the combination of Byzantine, Sicilian and Italian naval power protected the merchant shipping of Europe, and in the later centuries the Italians, particularly Venice, and the Hospitallers (Knights of Rhodes and Malta) provided this protection. 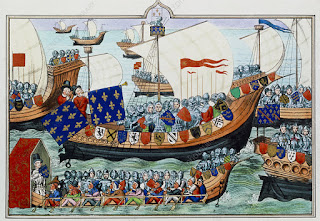 Meanwhile, trading concessions to the Italian maritime powers (Genoa, Venice, Pisa) had transformed the major Frankish cities into thriving ports for both the import and export of goods. Soon caravans from as far away as India and Ethiopia were making for the ports of the Levant in order to sell their wares. Indeed, even Chinese pottery of the period has been found in archaeological excavations.

The products passing through the ports of the Middle East were highly diverse. They included such high-value products as pharmaceuticals, spices, silks, cloth-of-gold (also known as siglatin — derived from silk Latin/silk for the Latins), ivory and incense. Other important exports were sugar (mass-produced in factories for the first time under the Franks), honey, soap, glass, pottery, icons, illuminated manuscripts, and jewelry. (Below the ruins of a 13th-century sugar mill at Kolossi in Cyprus.) 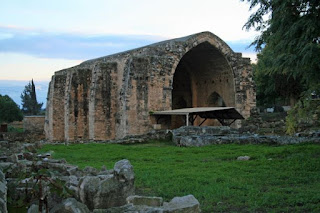 Looking more closely at only one of these, textiles, some of the finest cloth known to the medieval world originated in the Near East. Egyptian cotton and linen, both renowned for their quality, were exported through the ports of the Levant as was silk from Damascus. Words familiar to us as types of cloth such as muslin, gauze, and damask derive their names from the cities that first produced them in export quantities, namely Mosul, Gaza and Damascus. 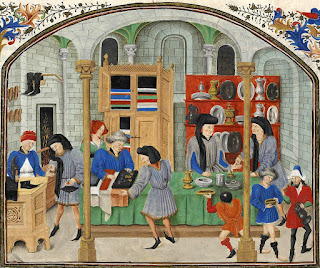 Glass, on the other hand, was a product produced in the crusader states directly. Beirut was famous for its red glass, Tyre for its white glass. Glass was used in plates for windows, but could also be enameled to create exquisite drinking vessels. Stained glass was likewise used both as decorative windows and in the production of luxury objects such a perfume bottles and chalices.

When speaking of jewelry, one specialty of the crusader states were mementos of the Holy Land for pilgrims to take home with them. Another product unique to this period in the Middle East were reliquaries, beautiful gold and silver containers for the protection and display of holy relics. 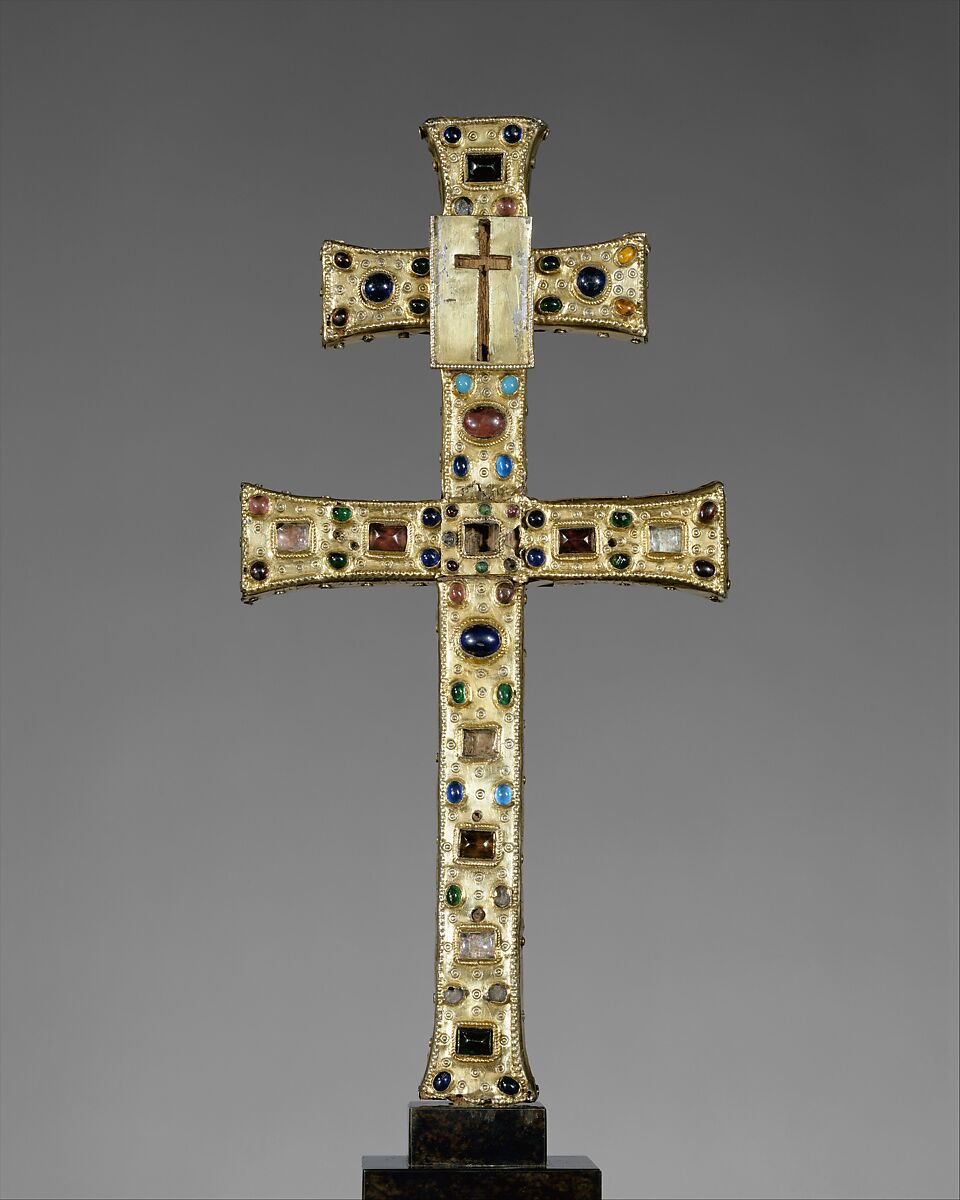 Coming in through these ports were equally valuable products: fur, timber (a very valuable product in the Middle East due to scarcity), wool, iron, and — shamefully — slaves. While slavery was no longer practiced in Western Europe, the economy of the entire Islamic world was still entirely dependent upon slave labor. This created a nearly insatiable demand for fresh human beings. The Italian maritime powers eagerly developed a highly lucrative trade in humans, buying “barbarians” (non-baptized) captives largely from what is now Russia and selling these in the Arab slave markets of the Middle East — passing through the ports of the Latin East on the way. 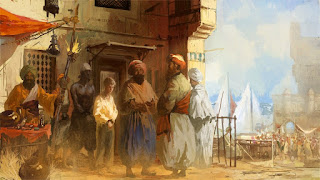 Last but not least, there was an enormous “trade” in pilgrims. This religious tourism, which included Jews and Muslims but was predominantly Christian, was a huge boon to the economy of the region. Thousands of ships sailed twice a year bringing tens of thousands pilgrims annually from the West to the Holy Land. Like today, these tourists needed places to stay and eat. They needed tour guides, transportation, and security. They bought souvenirs and shoes, clothes suitable to the climate, and gifts to take back home. If they got sick (and thousands of them did!), they needed medical attention. If they died, they needed burial. Whatever they did, they created employment and income for those already in the Middle East.

Trade volumes and values were so great that Christians and Muslims both were loath to interrupt it — even during hostilities. A Muslim pilgrim to Mecca passing through the Crusader Kingdom of Jerusalem (yes, that was not only possible but common) reported in amazement that even while the military elites were engaged in skirmishing, trade continued uninhibited. (He was writing in the early 1180s.)

Indeed, the value of trade sometimes made the military elites reluctant to engage in warfare at all, since their own revenues derived in large part from taxes on trade, markets, anchorage etc. This was particularly true under the Ayyubid successors to Saladin (1193–1250). Altogether, we know of more than 100 truces between the Franks and Saracens, all designed to end hostilities and allow trade to flow.

The economics of the crusader states will be a major focus of my forthcoming book: “The Holy Land in the Era of the Crusades: Kingdoms at the Crossroads of Civilizations,” Pen & Sword, 2021. Meanwhile, it provides atmosphere and color in my novels set in the crusader states.