Christian Charity for the Poor in the Crusader Kingdoms

For roughly two hundred years in the very heart of Christendom — in the Kingdom of Jerusalem -- free, modern (by the standards of the day), professional health care became "the norm." It was the product of an innovative new institution that viewed providing health and hospice care for the poor it's primary mission. At the time,  hospitals as institutions for the treatment and cure (as opposed to the spiritual care) of the sick were unknown in Western Europe. The innovations introduced by this new institution were rapidly imitated in the West and hospitals are now nearly universal. Yet the concept of providing all care free-of-charge is far less common. The example of Christianity set by this medieval institution seemed like a particularly appropriate topic for an entry here in the Christmas Season.

The Order of St. John of Jerusalem, soon known to contemporaries more simply as "the Hospitallers" evolved out of a hospice operating in Jerusalem in the decades before the First Crusade. After the establishment of the Kingdom of Jerusalem, this hospital expanded, assumed more duties and became a recognized order. It would eventually have thousands of associated houses spread all across Europe. It would also for several hundred years add military operations in to their agenda (the Knights Hospitaller and Knights of Malta). Yet throughout their history and to this very day the end the original mission of providing health care and what we would call hospice care to the “holy poor” has remained at the heart of hte institution.

To fully appreciate just how innovative and charitable the Hospitaller were one must bear in mind that in the midst of the crusades the Hospital of St. John vow to provide medical assistance to anyone, regardless of their faith.  Jews and Muslims as well as Christians of all kinds (Latins, Greek Orthodox, Maronite, Jacobite, Coptic, Ethiopian etc.) — could obtain care and treatment at any Hospitaller facility — free of charge.

Furthermore, because many in need of medical care were not well-enough to walk to a hospital, the Hospitallers scoured the streets of city and town, collecting any in need of care. After a battle, they scoured the battlefield for the wounded and dying and transported them to field hospitals. The Hospitallers are, therefore, views as the first Western institution to develop an ambulance corps. Something the decendents of the Order still provide today. 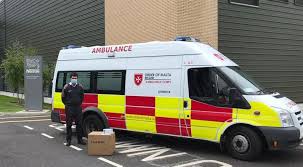 The hospitals of the Hospital were staffed by professional physicians and surgeons — again regardless of faith, so including Jewish and Muslim and Orthodox as well as Latin Christian doctors and surgeons. Each doctor had responsibility for a ward and had two trained assistants for making medicines and take lab tests and nine “servants” to feed, wash and otherwise care for the patients. (That’s a total of 12 staff members per ward.) The “servants” were the brothers and sisters of the Hospital itself, who viewed themselves as “serfs to the poor.” 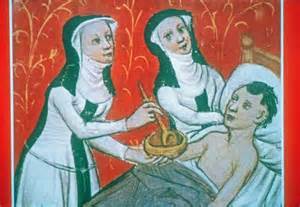 Because the Hospitallers viewed every poor man and woman as Christ, the Hospitallers believed that the poor deserved not just care and treatment but the best and most luxurious care possible. Travelers from the 12th century particularly reported in awe about the size and brightness of the wards with large windows to let in the light. One described it as “a palace.” They noted too that hospital complex contained several baths, gardens, and cloistered courtyards to make it pleasant. Most important, however, was the care given to the individual patients. 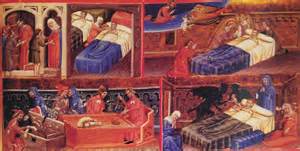 Professor Jonathan Riley-Smith notes in his book Hospitallers (Hambledon Press, 1999, 26) that: There were separate beds for the sick at a time when only the grandest lords had their own beds (and in the obstetrical ward there were little cots so that the babies should not be disturbed by their mothers.) The beds had feather mattresses and coverlets, and the patients were provided with cloaks and sandals, so as to protect them when they went to the latrines.”

Speaking of which, the flagship facilities in Jerusalem and Acre had extremely sophisticated plumbing and sewage systems. Patients took regular baths and received foot washing twice weekly. There were also multiple kitchens to enable food to be prepared in accordance with Jewish and or Muslim dietary rules or for special meals for patients with special dietary needs. 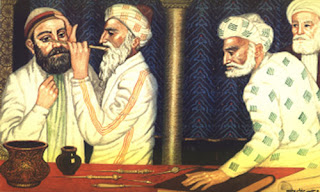 The food offered patients was lavish and extravagant by contemporary standards including white bread, fresh meat on three days a week, fish on fasting days, and a wide range of fruits and vegetables. This was, remember, in the Near East where citrus fruits, dates and plums, pomegranates, grapes, apples and pears abound.

And all for free….

All my novels set in the crusader states reflect the important role of the Hospitallers. Find out more about all these books at: https://www.helenapschrader.com/crusades.html