The Siege of Antioch

Arguably, the most decisive event of the First Crusade was the Siege of Antioch. On the one hand, no where else during the crusade did morale come so close to breaking and the entire enterprise come so close to failing. On the other hand the failure of the Byzantine Emperor to send assistance was decisive in convincing the crusaders that he was untrustworthy and that their own oaths to him were null and void. It was this break with Byzantium that cleared the way for the establishment of Latin Christian states independent of Constantinople in the Holy Land. 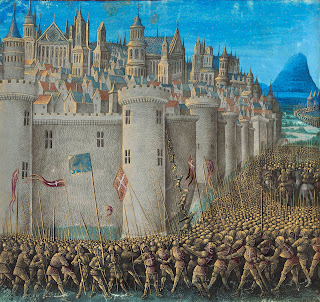 Except for one last short confrontation quickly won by the crusaders in mid-September, the Turks opted not to confront the crusaders after Dorylaeum. Instead, they turned the land itself into the crusader’s enemy. As the crusaders advanced deeper into Asia Minor, reclaiming (for the Byzantine Emperor) one city after another, they found themselves in territory which had been emptied, picked clean or even burned by the retreating Turks. Water and provisions became desperately short and progress agonizingly slow. Progress slowed to an average of 8 miles a day. Thousands died of hunger, thirst, heat-stroke and other diseases, while an estimated four out of every five horses died during the march across Anatolia.

To increase the chances of obtaining the necessary food and fodder, the army split up. While the main body took the northern route, Tancred and Baldwin de Boulogne, operating independently of one another, took their contingents south into Cilician Armenia. Here the population welcomed them and assisted them in taking one city after another from the hated Turkish garrisons. Indeed, Baldwin soon left the main crusading host altogether and with just 60 knights set off for Edessa. There, he soon emerged as an independent ruler in what became the first of the crusader states, the County of Edessa.

The vast majority of the crusaders, however, came to the plain around Antioch. This great city founded by one of Alexander the Great’s generals was home to one of the four Patriarchies of the Church and closely associated with Saint Peter. It had long been considered one of the most important cities in Christendom, but had fallen to Muslim armies in 637, shortly after Jerusalem. The Byzantine Empire had re-established control of the city in 969, and its conquest by the Seljuks more than a hundred years later in 1086 had sent shock waves to Constantinople, triggering the appeal to the West for aid. When the crusaders arrived, Antioch housed a population of roughly 40,000 still predominantly Christian inhabitants. It was defended by massive walls reinforced by 400 towers and a large Seljuk garrison. It was far too large for the crusaders to completely invest.

Furthermore, despite horrendous attrition during the march, there were still roughly 30,000 crusaders. The need to provide food for so great a host resulted in the establishment of foraging centers as much as fifty miles away. The resources of most knights and minor lords were nearly exhausted. When winter came, added bitter cold aggravated the hunger and exhaustion already being suffered. Now, when the crusaders were at their weakest, the Seljuk relief armies attacked, first in in late December 1097 and again in early February 1098. But attacks were beaten off, yet illness, exhaustion, malnutrition, hunger and intense cold continued to eat away at both the numbers and the morale of the crusaders.

The arrival of an estimated 10,000 reinforcements by sea failed to alter the fundamentals of the situation. Many men started to desert the crusade, some sailing away on the ships that had brought reinforcements, others returning by the land-route which was, through their own action, cleared of hostile forces. The most prominent of those who left the siege camp, although his motives remain unclear, was Stephen of Blois; he removed himself to the liberated city of Iskenderum, possibly to recover from illness. The Byzantine advisors likewise departed, possibly in an attempt to persuade the Emperor to send military aid since a new and larger Muslim army under the Atabeg Kerbogha of Mosul was approaching.

Fortunately for the crusaders, disaffection was growing inside the besieged city as well as without. Bohemond of Taranto got wind of it, but kept the knowledge to himself — until he had persuaded his comrades to agree to let him to keep Antioch on two conditions: 1) that he captured it and 2) the Byzantine Emperor did not appear in person to claim it. Once they had agreed, Bohemond produced a plan based on the betrayal of one section of the wall by the Armenian captain commanding it. On the night of 2-3 June, a small body of Bohemond’s knights scaled the wall without opposition in the sector held by the Armenian. They then opened one of the main gates from the inside, enabling the rest of the crusaders to flood in. The Muslim garrison fled to the citadel. The crusaders gained control of the entire city with its mighty fortifications — and all without attacks on the civilian population. There was no bloodbath.

It was not a moment too soon. Shortly (by some accounts only hours) afterwards, Kerbogha’s massive, coalition army arrived on the scene. This was composed of units recruited across Syria, Iraq and Anatolia. The crusaders were trapped inside the very city they had themselves besieged for nine months. Supplies were desperately short; starvation still haunted the crusaders. Meanwhile the Seljuk garrison, emboldened by the arrival of Kerbogha, sallied out of the citadel to attack the crusaders from the rear. Although beaten off, a crusader sortie against Kerbogha on 10 June also failed.

Panic gripped the crusaders. So many wanted to desert the enterprise that the leaders had to lock the gates at night. Yet some deserters escaped and reached Stephan of Blois. He, in turn, made his way West and intercepted Emperor Alexius, who was slowly advancing with a Byzantine army to restore Byzantine control over the territories liberated by the crusaders. Blois either convinced Alexius that the situation in Antioch was hopeless or provided him with a welcome excuse for not attempting a relief effort. This fateful decision was to poison Latin-Byzantine relations for the next sixty years.

Meanwhile, in Antioch a serious of panic-induced hallucinations or cynically orchestrated fake visions started to galvanize the crusaders. The most famous of these was the discovery of a rusty Roman spearhead, which a priest claimed had been revealed in a dream as the spear that had pierced Christ’s side at his crucifixion. Despite the skepticism of the papal legate, the masses were mesmerized. The leadership sagely recognized that the psychological moment to risk battle had come. On 28 June 1098, the crusaders marched out — almost all on foot because there were so few horses — and attacked Kerbogha’s much larger army. The rag-tag, half-starved and numerically inferior crusaders put the great Seljuk army to flight and the Seljuk garrison immediately surrendered the citadel. As one of the leading contemporary historians of the crusades puts it: ‘This extraordinary victory has never been explained.’[i]

Significantly, this victory was celebrated by a religious procession composed of the entire Christian community of Antioch — Armenians, Syrians, and Latins. The procession wound its way through the city streets to end at the cathedral where the Greek Orthodox patriarch, John V, was re-enthroned. The symbolic importance of this act needs to be highlighted in face of the persistent allegations of Latin oppression of the indigenous churches. This ceremonial act in Antioch on June 28, 1098 affirmed the authority of a Greek Orthodox cleric over all Christians in the city — the Latins no less than the Orthodox. This spontaneous expression of Christian solidarity should not be forgotten, despite the later, persistent squabbles between Latin and Orthodox clergy that punctuate the history of the crusader states.

This entry is an excerpt from:

The Holy Land in the Era of the Crusades: Kingdoms at the Crossroads of Civilizations is available for pre-order on amazon.com and amazon.co.uk.
Posted by Helena P. Schrader at 2:30 AM