The Achilles' Heel of the Crusader States

North of the Kingdom of Jerusalem, three other crusaders states had been established: the County of Tripoli, the Principality of Antioch and the County of Edessa. The later two entities proved extremely vulnerable and Edessa would be the first of the crusader states to fall. 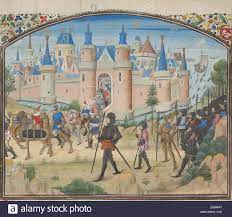 This entry is partially based on an excerpt from Dr. Schrader's comprehensive study of the crusader states.