While the Franks regained their footing in the Holy Land, the crusading spirit experienced a revival in Western Europe. In 1212, a youth movement to capture Jerusalem by faith alone shamed the pope into issuing a new crusading appeal in 1213. The youthful King of Sicily and Germany, Frederick II Hohenstaufen, stepped into his grandfather and father’s crusading footsteps, taking the cross at his coronation in Aachen on 25 July 1215. Other kings were also recruited, namely the kings of Hungary, Cyprus, and Jerusalem, but Pope Innocent III was determined to retain control of this crusade, which he considered only one strand of a vast and permanent crusading movement. 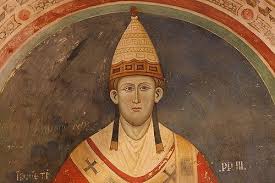 Pope Innocent III envisaged crusading as a permanent state of warfare against the enemies of the Church, wherever they were and whatever form they took (Moors, pagans, Saracens or heretics). Despite Innocent’s death in 1216, this crusading vision was adopted and pursued by his successor Honorius III, who appointed a papal legate, Cardinal Pelagius, to represent him in the Fifth Crusade. Because the cardinal embodied papal authority in a campaign without a dominant secular leader — and because he had the largest purse — Pelagius wielded undue influence. This experiment with church leadership of a crusade proved utterly disastrous.
The first contingents of crusaders started arriving in Acre in late 1216 and helped push back the borders of the Frankish kingdom marginally before sailing in late May 1217 to lay siege to the Egyptian port of Damietta. The strategy, devised apparently collectively, was to strike a decisive blow against the Ayyubids in their power-base of Egypt in order to force them to surrender not just bits and pieces of territory but everything that had once been part of the Kingdom of Jerusalem. The strategy assumed that an attack on Cairo would threaten the Ayyubids to such an extent that they would concede Jerusalem.
The siege of Damietta lasted nearly two years and was characterized by a lack of unified command as contingents of crusaders came and went independently. In the midst of the siege, August 1218, the Sultan al-Adil died, and his empire broke up.  The two major pieces went to his son al-Kamil, who inherited Egypt, and his son al-Mu’azzam, who inherited Syria, with smaller fragments on the fringes going to other heirs. Shortly after the crusaders captured Damietta in December 1219, al-Kamil persuaded his brother al-Mu’azzam to attack the crusader states in order to divert attention from Egypt. The tactic worked only partially. With King John and most of his knights in Egypt, the Saracens were able to strike deep into the heart of the kingdom, overrunning and laying waste to Caesarea. King John and the knights of Jerusalem rushed back to their homeland to restore the situation. This, however, did not seriously alter the situation in Egypt, since the vast majority of the crusaders remained in position and retained possession of Damietta.
Al-Kamil tried a new tactic: diplomacy. He offered to restore all territories that had formerly belonged to the Kingdom of Jerusalem, with the exception of the castles of Transjordan, in exchange for the crusaders evacuating Egypt. All sources agree that King John and the barons of Jerusalem were wholeheartedly in favor of accepting these terms. For them, this was what the crusade was about. The Military Orders, however, objected to the fact that the castles in Transjordan were not included. The crusaders from the Italian city-states opposed the treaty because they considered Egypt a far more lucrative trading base than inland Palestine. The German crusaders appear to have been reluctant to abort a crusade that their Emperor had vowed to join, even if he was still notably absent. The Papal Legate appears to have seen the offer as a sign of weakness that justified pursuing the crusade with more vigor. For whatever reasons, the majority rejected the offer, and the crusade continued, meaning the crusaders remained in occupation of Damietta awaiting the arrival of Emperor Frederick II.
He never came. He had excuses. Other items on his agenda, such as subduing a Muslim rebellion in Sicily, took priority.
In July 1221, after rejecting a second offer from al-Kamil with roughly the same terms as before, the crusaders marched out with the goal of capturing Cairo. Instead, the Nile flooded and the Saracen army used its better knowledge of the terrain to cut the crusaders off from their supplies and retreat. It was a complete debacle in which Damietta was returned to the Sultan not for Jerusalem but merely for the lives and freedom of thousands of captives. The survivors went home with their tails between their legs.
In retrospect, the truce offered by al-Kamil looks good, yet it was probably always a mirage. Al-Kamil was giving away his brother’s (not his own) territory and it is doubtful if he could have delivered on his promises. Even if al-Mu’azzam had cooperated, and the fact that he destroyed Jerusalem’s fortifications suggests he intended to, the agreement would have been temporary because from the Muslim perspective the maximum validity of any truce signed with non-Believers was ten years, ten months and ten days. The fact that al-Kamil did not fully comply with the terms of the agreement he did sign, likewise suggests that the grandiose offer of restoring the Kingdom of Jerusalem to its former borders was a red-herring designed to sow dissent among the crusaders. Considering the outcome of the advance up the Nile, on the other hand,  the crusaders might have done better to call the Sultan’s bluff.