St. Louis and the Seventh Crusade

On a dark December day in 1244 the French King, Louis IX, lay dying. On his deathbed he promised God that if he were granted a few more years of life, he would liberate Jerusalem from the Muslim yoke. Miraculously, Louis recovered, and despite the best efforts of his mother and advisers to convince him his vow had been made in a moment of madness and did not need to be honoured, Louis was determined. Immediately he started preparing for a new crusade. 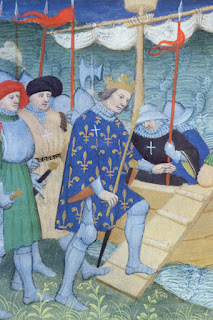 Louis' crusade that would come to be known as "the Seventh" was predominantly a French affair, not only because it was the brainchild of a French king, but also because the struggle between the papacy and the Holy Roman emperor had reached a state of open warfare. The pope had declared Frederick II ‘deposed’ and called for a ‘crusade’ to enforce his ruling. This effectively precluded German and Italian participation. Nevertheless, France was so wealthy and Louis’ position so strong that with his own resources he was able to launch one of the best organised and financed crusades of the entire era.

Between 15,000 and 18,000 thousand fighting men were involved; of which as many as 2,800 were knights. Louis systematically collected funds and chartered large numbers of ships, including long-distance horse transports and shallow-draught landing craft, the latter contributing decisively to the capture of Damietta. He also pre-positioned supplies of wine and grain in massive dumps on Cyprus. Louis personally took an active and intense interest in every aspect of the preparations for his crusade.

On 25 August 1248, King Louis embarked at Aigues Mortes, accompanied by three of his brothers and his queen. He adopted the same strategy as the Fifth Crusade, namely attacking Egypt, expecting that a decisive victory over the Ayyubids in their powerbase would force concessions in the Holy Land. The crusaders wintered in Cyprus, where they enjoyed the hospitality of King Henry and restored the health of their horses while awaiting additional contingents.

In May 1249, King Louis sailed for Damietta with an army reinforced by numerous Cypriot contingents under the command of the Constable and Seneschal of Cyprus, Guy and Baldwin d’Ibelin, respectively. After a dangerous storm, the fleet arrived off Damietta on 4 June; the next day, Louis undertook a dangerous amphibious landing against armed opposition. Jean de Joinville, the Seneschal of France and participant in this landing, tells the following story in his biography of King Louis:

When the king heard that the standard of Saint Denis was on shore he … refused to be parted from the emblem of his sovereignty, and leapt into the sea, where the water came up to his armpits. He went on, with his shield hung from his neck, his helmet on his head, and lance in hand, ‘till he had joined his people on the shore… . [Here] he put his lance under his armpit, and holding his shield before him, would have charged right in among [the Saracens] if certain sagacious men who were standing around him had allowed it.[i]

Despite multiple attacks by Saracen cavalry, the crusaders held on to their bridgehead on the sands before the city while their horses were brought up in the second wave of landing ships. As night fell, the crusaders prepared to besiege Damietta as the Fifth Crusade had done for a year-and-a-half. They were astonished to learn the entire city had been deserted. The sultan’s troops had retreated upriver, and the garrison and population — feeling abandoned — had fled after them.
This was a stroke of luck that allowed the army to take control of a walled city containing ample food, water and shelter, without casualties. Ironically, because the crusaders had expected a long siege, their attack had been launched while the Nile was still flooded. This meant they could not follow-up their surprise victory because they had to wait for the floodwaters to recede. This had the added benefit of allowing temperatures to drop to more tolerable levels for marching and fighting and enabling reinforcements to arrive under Louis’s brother, the Count of Poitiers.
In due time, a war council discussed strategy. The majority favored an attack on Alexandria to facilitate a diplomatic deal benefitting the crusader states. In contrast, Louis’ brother, the Count of Artois forcefully argued that the way to kill a snake was to crush its head: i.e., an assault on Cairo. Louis accepted this advice, and on 20 November 1249, led his army out of Damietta to advance up the Nile towards Cairo.
Meanwhile, the Sultan al-Sahil Ayyub had died and been succeeded by his son, Turan Shah. Because the latter was not present in Egypt, so the sultan’s Mamluks assumed temporary command of the Egyptian army. They concentrated at Mansourah while the crusaders made slow but steady progress marching up the Nile. Throughout the march, King Louis’ fleet kept his army well supplied and held open the lines of communication to Damietta, where the Queen of France remained with a substantial garrison. At Mansourah, a well-fortified town positioned strategically at the junction of two branches of the Nile, progress ground to a halt.
The crusaders could not advance on Cairo without first crossing over one branch of the Nile and taking Mansourah. All attempts to bridge the river failed. Then on 8 February 1250, an Egyptian traitor revealed a ford to the crusaders, and King Louis’ army started crossing the Nile. Unfortunately, the advance guard was placed under the command of Louis’ impetuous brother Robert, Count of Artois. He rushed ahead against the King’s explicit orders. Artois succeeded in overrunning the Saracen camp outside the city walls but foolishly followed the fleeing Saracen troops into the city itself, where the French were trapped in the narrow, irregular streets and set upon by the entire population. Not one of them escaped, and the Count of Artois’ body was hung from the walls in triumph. With the main body of troops, King Louis was able to withstand a counterattack and fight his way forward to successfully occupy the camp vacated by the Saracens, but the city remained firmly in Saracen hands.
This bloody, indecisive and bitter victory was the turning point in the crusade. While the crusaders remained encamped before Mansourah, the Saracens transported disassembled ships by camel and reassembled them upriver. These Saracen warships systematically started to systematically intercept Louis’ supply ships. By April, Louis’ army was starving and diseased. Both scurvy and dysentery had decimated the ranks. Louis, himself desperately ill, gave the order to retreat. The Saracens harassed the crusaders every step of the way, until Louis, no longer able to ride or stand, surrendered.

The first thing the sultan did was to order the execution of all the sick and wounded among the poor; only those well enough to be enslaved were spared. The nobles were held for ransom, and the bargaining began. With threats of torture, including showing Louis the instruments of torture to be employed, the sultan attempted to force the king to surrender the formidable castles of the crusader kingdoms still in Frankish hands. Louis replied that the sultan could do with him as he pleased, but he could not surrender the fortresses because he did not control them. The sultan eventually settled for the return of Damietta as the king’s ransom and payment of 800,000 bezants for all the other prisoners. Although the sultan was then assassinated by his Mamluks, the terms of the treaty were respected, and Louis and most of the high-ranking nobles were released upon the return of Damietta and payment of half the ransom.

The bulk of those released had had enough crusading and returned home at once, but King Louis sailed for Acre instead. He was determined to remain in the Holy Land until the last of the prisoners had been returned. He also set about strengthening the defences of the Kingdom of Jerusalem. He accomplished the latter by extensively refortifying Acre, Caesarea, Jaffa and Sidon at his own expense. He also arranged for a permanent garrison of 100 French knights at Acre supported by appropriate, if unnamed, numbers of sergeants, archers and support troops, bringing the total commitment close to 1,000 men. Meanwhile, Louis tenaciously and sagely negotiated with the Muslim states, who were again at war with one another and willing to court the Franks.

Ultimately, Louis signed a truce with the new rulers of Egypt, the Mamluks, because they still held thousands of captives. He concluded a treaty with them in 1252 that secured the release of the remaining prisoners and cancelled his outstanding debt of 400,000 bezants. In 1254 he signed a truce with Damascus and Aleppo as well. These treaties secured a comprehensive if temporary peace for the Kingdom of Jerusalem. On 24 April 1254, Louis sailed for home. Despite the tragic end of his crusade, he left the Kingdom of Jerusalem stronger than before. As Thomas Madden put it: ‘The contrast between Louis IX and Frederick II could not have been more stark’.[ii]