Review: "Downfall of the Crusader Kingdom" by W. B. Bartlett 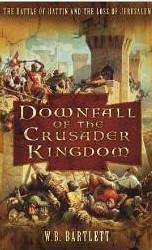 Bartlett’s "Downfall of the Crusader Kingdom: The Battle of Hattin and the Loss of Jerusalem" is a first rate account of the events leading up to the fall of the crusader Kingdom of Jerusalem.  Bartlett has clearly based his account on the sources, Christian and Muslim, and he has a firm and balanced grasp of the history, yet he writes in a fluid and comprehensible prose.


One great strength of this book is its comprehensive approach. Bartlett explains the critical importance of Byzantium’s waning strength upon the Kingdom of Jerusalem. He reminds the reader of developments in Western Europe that impacted crusading enthusiasm and so the resources of the kingdom. He touches on economic factors of importance, and provides succinct and useful descriptions of the comparative arms, armor and tactics of the antagonists.  He is careful to stress the ethnic and religious diversity of both the Christian kingdom and Saladin’s vast empire, for neither the Christian Kingdom nor Saladin’s empire were monolithic but rather fractured by many internal divisions.

Bartlett is particularly adept — unlike far too many academics — at putting himself into the shoes of his subjects and examining possible explanations of known behavior and their motives. In consequence, Bartlett avoids making demons and saints out of any of the actors.  Saladin’s military achievements and famed chivalry are duly noted and praised — but so are his mistakes, ruthlessness and occasional acts of barbarism.  Guy de Lusignan is rightly castigated for his indecisiveness and weakness, but Bartlett also highlights his difficult situation.  The very complex character of Raymond de Tripoli is thoughtfully analyzed and both his apologists and detractors given their say, enabling a balanced analysis of his actions. Balian d’Ibelin’s significant role as a voice of reason, a mediator and an effective defender of Jerusalem is likewise highlighted.  Only in the case of Reynald de Chatillion and Gerard de Rideford does Bartlett’s objectivity break-down somewhat.

One small weakness with the book is that Bartlett appears unfamiliar with Bernard Hamilton’s well-argued thesis about the strategic utility of Chatillon’s acts of aggression. Likewise, Bartlett seems to have confused the period at which Isabella was forcibly separated from her mother (from the age of 8 to 11), and so blithely glosses over this brutal act of power politics on the part of Agnes de Courtney as a mere “mother-daughter spat.” He also did not benefit from more recent studies on leprosy in the Middle Ages and so inaccurately suggests that leprosy was seen as a punishment for sin when, particularly in the Latin East, it was more often seen as a sign of God’s grace. Yet these are very minor flaws in an otherwise excellent historical account written for the public rather than the academic community.

While Malcolm Barber’s The Crusader States is the more valuable reference book to the student of Christian Jerusalem, Bartlett is far and above the better read.  For anyone who is not — and does not want to be — a specialist in the subject, Bartlett’s book provides a rapid, comprehensive and on the whole accurate introduction to the main issues and personalities of this fascinating period.


Dr. Helena P. Schrader holds a PhD in History.
She is the Chief Editor of the Real Crusades History Blog.
She is an award-winning novelist and author of numerous books both fiction and non-fiction. Her three-part biography of Balian d'Ibelin won a total of 14 literary accolades. Her most recent release is a novel about the founding of the crusader Kingdom of Cyprus. You can find out more at: http://crusaderkingdoms.com
Posted by Helena P. Schrader at 2:30 AM

Email ThisBlogThis!Share to TwitterShare to FacebookShare to Pinterest
Labels: Battle of Hattin, Kingdom of Jerusalem, Reviews