I conclude with my series debunking common misconceptions about the Middle Ages with a look at the notion that people in the Middle Ages rarely bathed, knew nothing about hygiene and generally lived like filthy pigs. 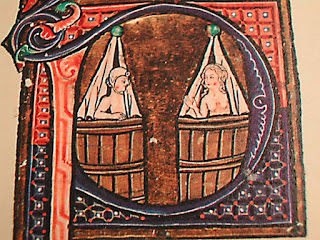 A favorite Hollywood convention is to portray people in the Middle Ages as filthy. Mice run across dinner tables while dogs fight over bones at their feet. Noblemen wipe their mouths on their sleeves (or hair!), and toss the bones from their plates over their shoulders. The poor are consistently depicted in filthy (and usually ragged) clothing and mud encrusted boots. Yet the evidence we have from the Middle Ages belies this image.

First, we should remember that although the "Middle Ages" started with the "fall" of Rome that refers to the political and military might of Rome not Roman civilization. The  customs and habits of people across what had been the Roman Empire from Yorkshire to Palestine were not suddenly extinguished or forgotten simply because the political and military structures that had made it possible to rule an Empire from Rome were gone. Rome fell, Roman thought, customs and knowledge remained in the hearts and minds of people all across the former Empire. That culture included bathing....

Across the Middle East and Muslim controlled territory in Cyprus, Sicily and Spain as well as in the Eastern Roman Empire bathing and bath-houses remained a feature of daily life just as it had been in Roman times. In the West, the situation was less clear cut because this is where the “barbarians” had the greatest impact. Nevertheless, we know from the rule of St. Caesarius, writing in the very start of the 6th century, that nuns and monks were expected to bathe regularly for hygienic purposes. Other texts recommend washing face and hands daily, as well as washing and brushing hair frequently, and keeping teeth "picked, cleansed, and brushed [sic!]" (Pernoud, Regine. Women in the Days of the Cathedrals. Ignatius Press, 1989, p. 84.)

Furthermore, bathing and washing are referred to in romances and depicted in manuscript illustrations throughout the Middle Ages. Washing hands before meals was part of the ritual at every manor and castle as well as in monasteries and convents. Washing clothes was so important that washer women ― always identified as older, respectable women very different from prostitutes ― accompanied armies. Women washing and hanging out clothes to dry are also a motif in medieval manuscript illustrations. 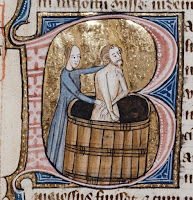 By the 13th century, possibly as a result of renewed contact with the Eastern (Byzantine) Empire and with the Muslim world during the crusades, bathing became very popular and prominent. Not only did public bath houses become numerous, but wealthier citizens invested in elaborate baths which by the 15th century including hot-and-cold running water fed from roof-top tanks. Even before that, the Franks in the Holy Land built aqueducts, bath-houses and sophisticated sewage systems.

Obviously, “popular” and “frequent” bathing in the medieval context was fundamentally different than in the 21st century. It took much more effort to heat water over fire and coals, and (except for the very wealthy) it meant pumping or hauling water from a well and lugging it to a tub or going to a bathhouse. The later cost money. Not necessarily a lot of money, but it was not entirely free, and it was certainly less convenient that stepping into a shower at home today. So, yes, hygiene would not have been at the same standards as today, but that is still a far cry from kings wiping their sleeves on their velvet robes or having mice running across their banquet tables. 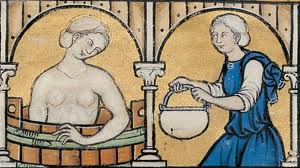 As for manners, descriptions and depictions of court rituals from coronations and weddings to religious processions and funerals make clear just how sophisticated and elaborate medieval manners and protocol were. Meals particularly were governed by elaborate rituals, starting with washing hands before meals and drying them on the towels provided by the server, and followed by clear protocols for pouring wine, for carving meat, and for assisting one’s table partner.

Likewise, there were rules of hospitality that included greeting a guest “courteously” and providing him/her with a bath and even a change of clothes, as well as a bed for the night, food and drink. Careful care of a guest’s horse as well as the guest himself was also expected, along with niceties such as holding the off-stirrup when helping a guest mount or dismount. 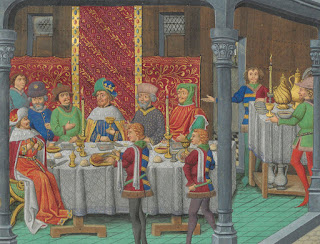 While manners evolved without going away, in the early Renaissance, increasing urbanization led to increasing water contamination, which in turn led doctors to associate communicable disease with water. Water was seen increasingly as “unhealthy” just at a time when the Reformation frowned at the notion of men and women sharing public baths. Bath-houses fell into disrepute and increasingly disappeared from the scene ― without being replaced for several hundred years by private baths.  Thus, while the castles of the late 15th century had hot and cold running water, the palaces of the 18th century had no baths at all. Likewise, while people in the Middle Ages viewed bathing as both hygienic and pleasurable, by the 18th century bathing had been replaced by satchels filled with fat and blood to attract and collect flees and perfume to cover body odors. Development is not linear and progress not inevitable.

The personal habits and manners of the Middle Ages is reflected as accurately as possible in Dr Schrader's novels set in the 12th and 13th centuries.
For readers tired of clichés and cartoons, award-winning novelist Helena P. Schrader offers nuanced insight into historical events and figures based on sound research and an understanding of human nature. Her complex and engaging characters bring history back to life as a means to better understand ourselves.
Find out more at: https://www.helenapschrader.com/crusades.html