Today, before starting a series on misconceptions about women in the Middle Ages, I want to honor my namesake, St. Helena, who located the site of Christ's grave. Below is a brief summary of her life and the story of the church erected on that site: the Church of the Holy Sepulcher in Jerusalem.

Helena was a historical figure, the mother of the Emperor Constantine I "the Great." According to most accounts she was born in roughly 248 AD in comparatively humble cicumstances, either in northwestern Anatolia or (less probably) in what is now the South of France.  She married the Roman officer Constaninius Chlorus, allegedly a man of equally humble background. However, Constaninius was an ambitious man and made a successful career. In 305 on the brink of becoming Caesar he ensured his elevation by repudiating Helena to marry Theodora, the daughter of Emperor Maximian.

On his father's death in 306, Helena's son Constantine was acclaimed "Caesar" by the Western legions, and he spent the next 18 years fighting rival emperors Maxentius and Licinius. In 324, he finally became sole emperor in East as well as West. Before his death in 337, he undertook major reforms of both the Roman Army and the imperial administration. He introduced a sound currency that was to last roughly a 1,000 years as the "gold standard" of coinage used around the Mediterranean. Last but not least, he  established a new imperial capital on the Bosporus in what became known as Constantinople (now Istanbul).

Yet long before his final victory over Licinius, Emperor Constantine raised his mother to the rank of Empress and had coins minted with her likeness on them. Furthermore, in 313 he (jointly with Licinius) issued the Edict of Milan that granted religious tolerance to Christianity. At about this time, Helena converted to Christianity and began to actively support the Christian church.

Helena used her status as Empress to finance the construction of a number of churches, notably in Rome and Trier, and is credited by Church chroniclers with great acts of charity for the poor and destitute. In 326, when she was already approaching 80 years of age, she  undertook a pilgrimage to the Holy Land.

We know that at about this time, people living in the Holy Land began to revere a relic which they believed was the cross on which Christ had been crucified.  According to the Church historian Rufinius writing in 403, this object was discovered after Empress Helena ordered excavations in the environs of the Temple to Venus, known to have been erected on the site of Christ's crucifixion by Roman emperors intent on eradicating the worship of Christ. Early accounts say that she and the Bishop Marcarius undertook the excavations, discovering under the porch of the Roman temple ancient quarries or tombs. According to Rufinius (writing less than a century after the alleged events), they found three crosses in one of these. Taking pieces of each, they brought these to a sick woman, who on contact with the third recovered miraculously. Thereafter, that cross was revered as the cross on which Christ had been crucified. It as divided into several pieces, and these were distributed to various churches, only one being retained in Jerusalem.

In later accounts of the finding of the True Cross, Bishop Marcarius was deleted in favor of a traitorous Jew and the sick woman became a dead man brought back to life, but these legends are less important than the fact that a great church financed by and on the order of Emperor Constantine was constructed to mark the cite of the Crucifixion and Resurrection his mother had identified. This became known as the Church of the Holy Sepulcher. Modern archaeologists believe that, given the fact that the site of the Crucifixion and Resurrection had never been lost from sight due to early eye-witness accounts and the later construction of the Roman temple, the Church of the Holy Sepulcher is built on, or very near, the site of the historical crucifixion and grave of Christ.

The first church on this site was a monumental Greek basilica 150 meters by 75 meters, covering almost exactly the same area as the Roman temple to Venus. This church encircled Calvary, or the site of the crucifixion, while a rotunda beside it covered the site of Christ's grave, reached by stairs leading underground.

This church was burned to the ground in 614 when the Persians sacked Jerusalem. After the expulsion of the Persians in 628 under Emperor Herakleios, a more modest church was built on its foundations. This second church gradually fell into disrepair during the years of Muslim rule starting in 638, and in 969 Moslem troops set the church on fire causing the dome to collapse. Although repaired by 984, this church was completely leveled by the Caliph el-Hakim in 1009. A new attempt to construct a church on the site of the crucifixion was not undertaken until 1048, but given the status of the Christian community under Muslim rule and their limited resources this was not a significant monument.

Only after the re-establishment of Christian rule in Jerusalem with the First Crusade was it possible to again construct a church worthy of the most sacred site in Christendom.  This was undertaken by the kings of the crusader Kingdom of Jerusalem, and was consecrated on the 50th anniversary of the liberation of Jerusalem on July 15, 1149.  This new church covered both Calvary and the Holy Grave. It is essentially this church which we can still see today in Jerusalem. Although it has inevitably undergone periods of decay and reconstruction, it retains the fundamental design and many remnants of the original crusader cathedral. 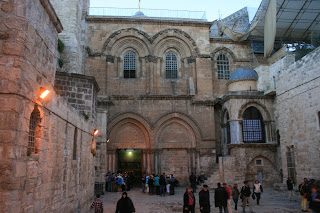 The Holy Sepulcher was a central monument throughout the crusader period and is therefore integral to descriptions of life in this era.