Maria Comnena was probably born in 1154 or 1155, the daughter of John Comnenos, Protovestiarius, the grandson of the Byzantine Emperor John II, and nephew of the ruling Emperor, Manuel I.  As such she was a member of the Byzantine Imperial family, but not in direct line to the throne. At the time of her birth, Manuel I had already been Emperor of the Eastern Empire for over a dozen years.

Manuel I consistently pursued a policy of cooperation with the crusader states, which included joint military operations, and a series of marriage alliances. In 1158, one of Manuel’s nieces, Theodora, was married to King Baldwin III of Jerusalem, and in 1161, Manuel himself took Maria of Antioch, sister of Bohemond III, Prince of Antioch, to wife. Finally, when Amalric I of Jerusalem decided to seek a second wife (the High Court had required him to set aside his first wife in order to be crowned king), he turned to the Byzantine Emperor. An Embassy was sent to Constantinople in 1165 to find a suitable candidate and negotiate the marriage contract. 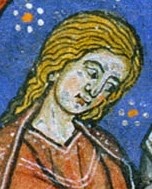 Whatever their reasoning, we can be certain that Maria Comnena had up to this point enjoyed the famously luxurious life-style of the Emperors of the Eastern Roman Empire, and — more important — the very high level of education typical of the women of her family. The Comnenas were not only literate in Greek classics, but versed in theology and history, as the writings of Anna Comnena, Maria’s great-great-aunt, attest. Furthermore, the Comnenen Emperors had sponsored a significant building program that in turn sparked a revival of Byzantine arts and letters including the introduction of new styles in mosaics and frescoes. Maria would, therefore, have come to Jerusalem with not only a substantial dowry, (her aunt Theodora had a dowry of over 100,000 gold pieces), and a large retinue of Byzantine advisors and scholars, but also with knowledge and tastes cultivated in the most sophisticated Christian court of the age. 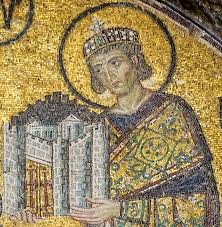 When Maria married Amalric and was crowned queen at the end of August 1167 she was probably no more than 12 or 13 years old; Amalric was already over 30. While Maria’s young age precluded a major role for her in politics, it is nevertheless probable that the magnificent renovation of the Church of the Nativity, a work that included beautiful mosaics with heavy Byzantine influence, was initiated after her arrival in the Kingdom of Jerusalem. 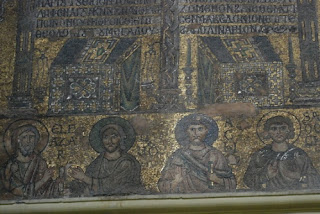 And just as notable, her eldest son — who was not royal — built a house in Beirut in which, according to a visitor in 1212, the mosaics depicting a sandy shore were so realistic he “feared to tread on [it] lest he should leave a footmark.” (Wilbrand of Oldenburg, in Steven Runciman, “The Families of Outremer: The Feudal Nobility in the Crusader Kingdom of Jerusalem, 1099-1291,” (London, 1960), p. 1) In addition to the mosaics, her son’s home had walls paneled with polychrome marble, vaulted ceilings painted to resemble the night sky, and glazed windows opening onto the sea or “delicious” gardens. In short, Maria retained throughout her life and passed on to her children a love of beauty and an appreciation of artistic excellence and design.

It is also notable that four years after his marriage to Maria, Amalric undertook a state visit to Constantinople, the first Latin king to do so as a reigning monarch. Furthermore, Byzantine sources suggest that he acknowledged Manuel I as his overlord during this trip. While this was a political not a personal trip, it is hard to imagine that Maria was not a voice in his ear encouraging this unprecedented step — and just as hard to imagine that he would have listened if he had been displeased with his Byzantine bride. We furthermore have the evidence (such as it is) of William, Archbishop of Tyre, who was an close friend of King Amalric, who writes that after his marriage to Maria, King Amalrich “cherished his wife ever after with affection worthy of praise and is believed to have been faithful to her even to the end. Having thus laid aside light conduct, as if changed from that former man, he began to undertake important works and to occupy himself entirely with serious matters.” High praise indeed for the influence of a bride who was still more child than woman!

Notably, at the time this trip took place, Amalric’s positive attitude toward his Byzantine bride could not be traced to her fertility because she had yet to give him any children; it is far more likely that he respected her for her education and intelligence, although beauty as a factor cannot be excluded, despite the fact that there is no explicit reference to her attractiveness in existing texts.

It was not until the next year, 1172, that she gave birth to a live child, a daughter who was Christened Isabella. Maria was by then 17 or 18 years old. 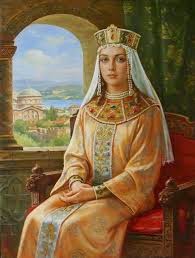 Two years later, her husband was dead. As his widow, she would have taken part in the meeting of the High Court of Jerusalem that elected the next king.  The choice, apparently by mutual consent and without serious dissention, fell on Amalric’s only male heir, his son by his previous marriage to Agnes de Courtenay.  Because Baldwin IV was a minor at the time of his father’s death, the kingdom was placed in the hands of a regent, Raymond of Tripoli.

At this point Maria retired from court, but there is no indication she did so in disgrace. On the contrary, her retirement appears to have been entirely voluntary. King Amalric had settled on her the large and wealthy barony of Nablus as her dower-portion. This lordship, directly north of the royal domain of Jerusalem and lying at an important cross-roads, had once been independent, but had reverted to the crown in 1161. It owed 85 knights to the feudal levee, and included the ancient city of Nablus famous for its perfumes and soaps. At this time, it was still inhabited by a sizable population of Samaritans, Jews and Muslims. Notably, Maria was granted Nablus for life, but was not enfeoffed, i.e. the lordship reverted to the crown at her death.

In short, at roughly the age of 20, Maria Comnena found herself a very wealthy widow with complete independence.  She had enough wealth and enough men (85 knights is only the tip of the iceberg of the men at her command) to protect herself, her property and her independence. She was a Dowager Queen, mother of the second-in-line to the throne, and she could not be forced into a second marriage by either her step-son or her great-uncle, although she needed the former’s permission to re-marry. Maria, however, was in no hurry to remarry. She retired to Nablus, and made no attempt to interfere in the government of the realm. 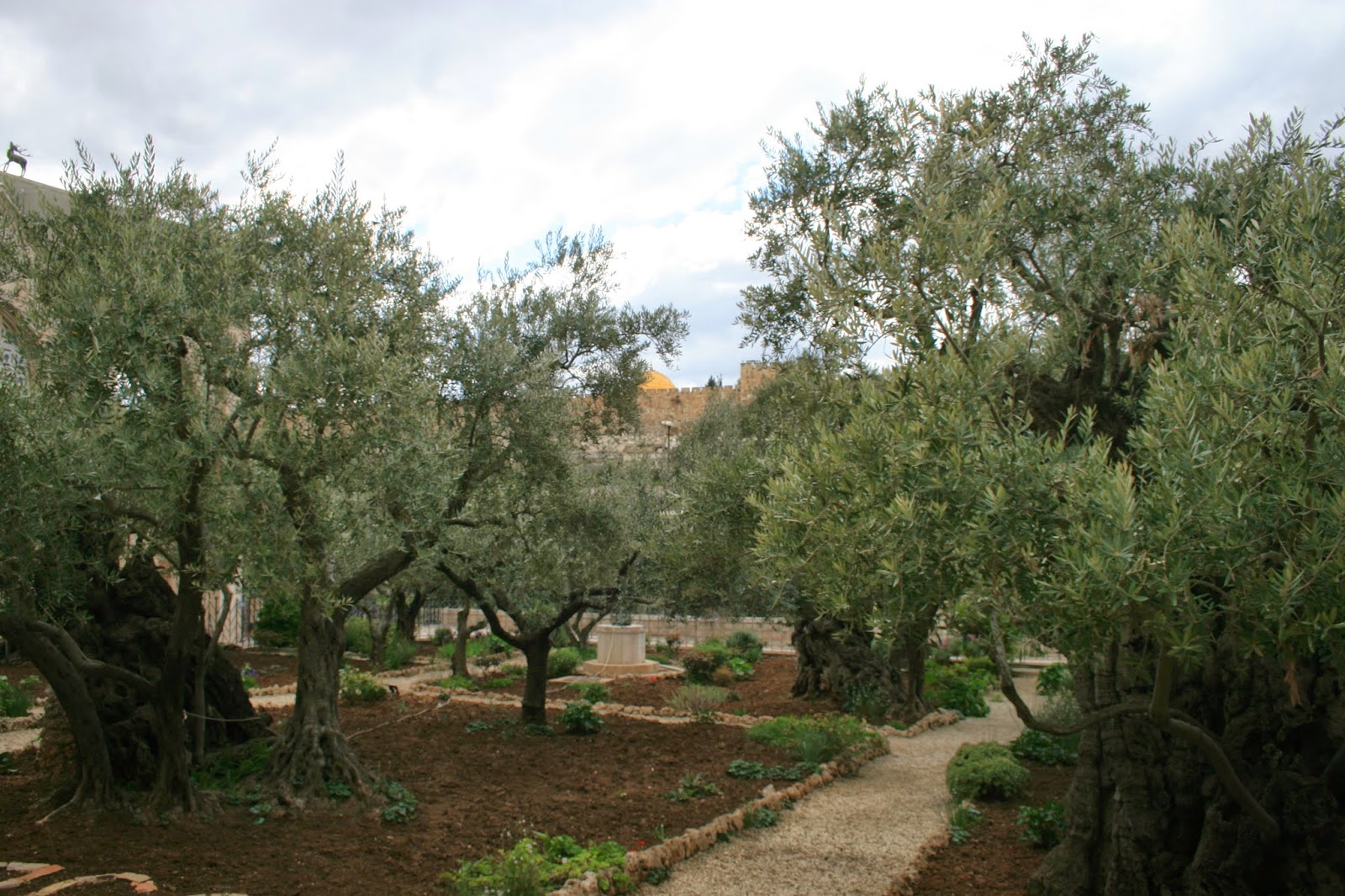 Nevertheless, in mid-1177 the Count of Flanders, who had come to the Holy Land with a small army of crusaders, sought her out in Nablus. Flanders was at loggerheads with Baldwin IV and the High Court of Jerusalem about who should select Princess Sibylla’s next husband (her first husband had just died unexpectedly) and about a proposed campaign against Egypt that was supported by Manuel I, who had sent a fleet of seventy warships. Philip wanted assurances that he would be made king of Egypt if he helped conquer it, and Baldwin IV felt that any territory won by the expedition should belong to Jerusalem since he brought the greater resources to the campaign. That Philip sought out Maria in Nablus suggests that he saw her as a woman who could advise him on the likely reaction of the Byzantine Emperor to his actions and demands. Even more noteworthy, however, is that as a result of his meetings with Maria he had a change of heart and sent messengers from Nablus to Jerusalem declaring his acceptance of the High Court’s decisions with respect to the campaign in Egypt.  Maria Comnena at 23 was evidently a woman who could talk politics with the most savvy of Western noblemen and be persuasive without the least personal interest in the outcome.

It was also in late 1177 that Maria made a surprise second marriage to Balian d’Ibelin, the younger brother of the Baron of Ramla and Mirabel. Her life as Lady of Ibelin is the subject of a separate entry.


Maria plays a major role in my three part biography of Balian d'Ibelin:

Read more about Maria's rivals and daughter at: Balian d'Ibelin and the Kingdom of Jerusalem.
Posted by Helena P. Schrader at 12:30 AM