The Establishment of the Crusader States

The first crusade re-established Christian rule over some parts of the Holy Land, notably Antioch and Jerusalem, but the Western knights and noblemen who finally made it to Jerusalem felt they had been betrayed by the Byzantine Emperor.  Instead of returning the territory they had captured to Byzantine control, the crusaders established a series of independent states with Christian rulers: the Principality of Antioch, the County of Edessa, the County of Tripoli, and – most important – the Kingdom of Jerusalem. (Later, during the Third Crusade, the Latin Kingdom of Cyprus was also established, but that will be dealt with in a separate entry.)

Initially, these "kingdoms" were little more than Christian-controlled islands in an Islamic sea, separated from one another by large swaths of territory. Between 1099 and 1144 the Christians steadily increased their area of control -- in most cases giving the defeated Muslim defenders of cities and castles a safe-conduct after surrender. By 1144, the crusaders controlled the entire coastline of the Levant from south of Gaza to roughly Antalya. In short, the crusader kingdoms covered all of what is now Israel, most of modern Jordan, Lebanon, and parts of Syria and Anatolia as well.


The crusaders who founded and ruled these states were a tiny elite of Latin Christians from Western Europe, dependent economically on the local population – composed predominantly of Byzantine, Syrian, and Maronite Christians, with smaller populations of Jews, Muslims, and new settlers from the West – all speaking a variety of languages. Although Latin churches were built and the various Latin religious orders soon established a presence, neither the Orthodox Churches, nor the synagogues nor mosques were destroyed; the inhabitants of the crusader kingdoms were free to follow their religious conscience.

Furthermore, the states were at the crossroads of trade between East and West, and the ports of Christian Palestine were the key points for trans-shipping the riches brought by caravan from China, Persia, Egypt, and Arabia to the entire Western world. This made these states both prosperous and cosmopolitan. The crusader states, known collectively in the West as “Outremer” (beyond the sea), rapidly became a melting pot for culture and a breeding ground for art and science.
Posted by Helena P. Schrader at 5:20 AM No comments: 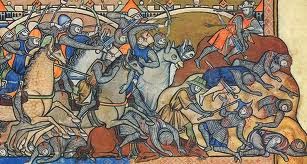