How to Plan a Crusade by Christopher Tyerman 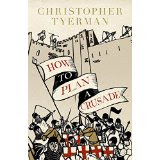 This book came highly recommended and provides a wealth of valuable information for anyone interested in understanding the society that produced the crusades. Organized by topic rather than chronologically, it examines topics all too often ignored in more conventional histories from finance to health, safety and supply. Most important, it documents the immense amount of planning, coordination, organization and expense that went into mounting a massive military campaign across vast distances in the age of horse and sailing ships.

After reading this book, no one can be in any doubt about how sophisticated, literate and well-organized medieval society was during the centuries in which crusading was undertaken. The book systematically and meticulously debunks notions of “spontaneous” movements by wild-eyed religious fanatics. It also highlights that in many ways crusader organization puts modern planning, blessed with all the advantages of digital technology, to shame.

My novels set in the crusader states try to reflect the complexity and sophistication outlined academically by Mr. Tyerman.