Located deep inside Saracen held territory, the siege of Acre was maintained largely by reinforcements arriving by sea, and the siege camp was itself encircled on land by the armies of Salah ad-Din, so that the besiegers were themselves besieged. The siege was to last two full years and cost tens of thousands of Christian lives. According to the Itinerarium Peregrinorum et Gesta Regis Ricardi, one of the most important contemporary accounts, the siege cost Christendom the Patriarch of Jerusalem, six archbishops, twelve bishops, forty counts, and five hundred barons. It also cost Jerusalem a queen and two princesses, all of whom also died of fever in the siege camp. While there are no reliable sources for the number of commoners lost, such high casualties among the privileged elites (that could afford the best armor, accommodation and food even in times of scarcity) suggests that tens of thousands of ordinary people -- fighting men, clergy and camp followers -- were lost in the siege of Acre. They died in combat, from disease and even starvation.

Furthermore, although both sides repeatedly launched assaults against the other, all were ultimately defeated at high cost. Between these major battles, small scale skirmishing occurred almost on a daily basis, causing continuous attrition. Ultimately, however, disease, deprivation, and unsanitary conditions accounted for the lion’s share of the casualties. Even after the arrival of large crusading forces under the kings of England and France (the Third Crusade), victory was not achieved by offensive action, but rather through a naval blockade that cut the Saracen garrison off from supplies and reinforcements. The garrison at Acre surrendered and received terms rather than being crushed by Christian arms. In short, the history of the Siege of Acre is a grim tale of stalemate reminiscent of the horrible trench warfare of WWI. 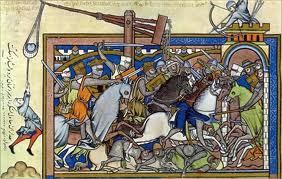 On arrival in Tyre, however, Conrad de Montferrat flatly refused to admit him to the city and furthermore refused to acknowledge him as king at all. Montferrat reasoned Lusignan had 1) forfeited his kingdom with his defeat at Hattin, and 2) renounced it to obtain his release from captivity. This turn of events had not been anticipated by Guy and took him by surprise. Allegedly, Guy was at a complete loss about what to do, and implicitly prepared to just go back to Antioch with his tail between his legs.

Geoffrey may have been impulsive and impatient by nature. Before coming on crusade, he was credited with leading a Lusignan attack on Eleanor of Aquitaine that resulted in the murder of the Earl of Salisbury (See Guy de Lusignan). In this incident, Guy is sometimes blamed for wielding the fatal lance, but Geoffrey as the elder brother was the man who made the decision to attack the unarmed and unsuspecting troop with the Queen of England. In any case, in August of 1189 Geoffrey de Lusignan had only recently arrived in the Holy Land. His proposal to lay siege to Acre may, therefore, have been either merely impulsive or based on ignorance because it is hard to imagine a military reason for the selection of Acre as a target. 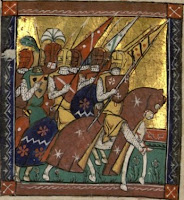 Some historians have argued that Acre’s port was particularly valuable, which is certainly true, and that the riches that could be garnered from a port would have supported many “money fiefs,” which is also true. But given its isolation, its excellent defenses and the size and loyalty of the garrison holding it for Saladin, these arguments for selecting Acre as a target seem less than compelling.  Rather, the siege of Acre was a tactical blunder by a man (Guy de Lusignan) who never evidenced a shred of military acumen. Although the city would eventually fall to the crusaders, even that victory would be tarnished by an ugly massacre as I describe in my next entry.


The Siege of Acre is an important event described in “Envoy of Jerusalem.” Buy now in paperback or kindle! 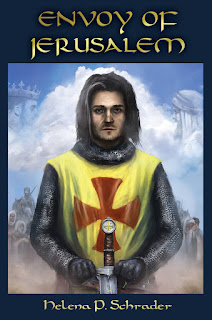