The Human Body, Illness and Death in the Crusader Era

It is often assumed that the people who practiced medicine in the Middle Ages were ignorant, untrained, guided by “pure superstition” and accountable to no one. Today’s post, the first in a series of guest essays by German scholar Fermin Person, looks at medical practitioners and standards in the Crusader States. 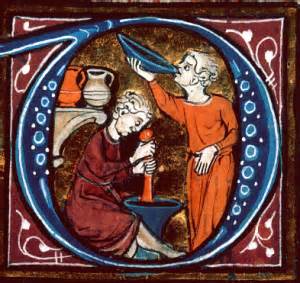 The medieval concept of illness was different from our current understanding. In the medieval period, medical theory (common to both East and West) explained illness as an imbalance of the four humours (body fluids), as divine punishment, as astrology or as the working of evil entities.

These basic concepts existed parallel to each other and mixed to some degree during the medieval period. There already existed the notion of infectious diseases and of epidemics, but with the very limited diagnostic capabilities of the period (seeing, smelling, tasting, feeling), it was not possible to differentiate infectious diseases from auto-immune disease or poisoning.

Ergotism (called “holy fire” or “St. Anthonies Fire”) for example, caused by alkaloids produced by fungus that befall cereals during wet weather, broke out in epidemics.

There was some understanding that blood loss from wounds was an important factor in the death from injuries, but there was still no understanding of the pathophysiology of haemorrhagic shock.

Another point of discussion was whether pus in wounds was something negative or positive. Medieval western (and Arabic) physicians lacked an understanding of infectious diseases and microbiology.

Similarly, the exact function of many organs was unknown or was misinterpreted, and the working of the circulatory system was also wrongly understood. For example, based on the classical scholar Galen, medieval physicians considered the liver to be the place of blood production.

Additionally, physicians generally had only had a rudimentary understanding of the internal anatomy. Knowledge of the anatomies resulted most probably from animal corpses, practical experience with wounds and from antique literature. Autopsies started in the western world only at the beginning of the Renaissance at the end of the 14th century. This is in contrast to the Eastern Roman Empire, where it is reported that in 1110 a contingent of Scandinavians that had taken up the cross fell ill in Constantinople. Autopsies were performed on the dead to clarify the cause of their death.

The medieval attitude to death was likewise different.

About 1/3 of the children born in the medieval west died before the age of five. Overall life expectancy varied significantly based on period, location and social strata a great deal. Based on archaeological and genealogical evidence it can be assumed that life expectancy was as low as 25-30 years during the medieval period. No exact data was available on the live expectancy in Outremer.

In short, death was much more present in the medieval world than in the modern period. During the medieval period the average human had a strong belief in an afterlife and the later bodily resurrection of the dead. It was considered ideal to have a period of illness before death in order to prepare as a good Christian for death. A sudden unprepared death, in contrast, was considered something terrible.

Mitchel, Piers D.  (2007) Medicine during the crusades, Cambridge University press
Tony Hunt (1999) The Medieval Surgery, Boydell & Brewer Inc
Edgington, S. (1994) Medical knowledge of the crusading armies: the evidence of Albert of Aachen and others. In M Barber, The Military Orders: Fighting for the Faith and caring for the Sick, (Aldershot, Ashgate)
Keda, B (1998) A twelfth century description of the Jerusalem Hospital, In H. Nicholson (ed.). The Military Orders. II Welfare and Warfare (Aldershot: Ashgate), pp. 3-26.