Today I continue with my short biography of Guy de Lusignan:


In early 1185, King Baldwin IV of Jerusalem, the so-called “Leper King” succumbed to his debilitating illness and died. He was succeed by his nephew, a child of eight. Raymond de Tripoli was named regent, and the Count of Edessa was made the boy’s guardian.  The fact that Tripoli was made regent — with the consent of the High Court — and the Count of Edessa, the boy’s great uncle, was made the boy's guardian are both indications of the intensity of the animosity and suspicion the bishops and barons of Jerusalem harbored against Guy de Lusignan by this time. There was, after all, a precedent for a queen reigning for an under-aged son, Melisende had reigned in her own right for her son Baldwin III.

At the death of Baldwin V a little more than a year later, hostility to Guy had not abated. As was usual following the death of a king, the High Court was convened to elect the next monarch. Some modern historians have made much of the fact that Tripoli summoned the High Court to Nablus rather than convening in Jerusalem itself. This is interpreted as a sign of disloyalty, but there is nothing inherently disloyal about meeting in another city of the kingdom. High Courts also met in Acre and Tyre at various times.  Nablus was part of the royal domain, comparatively close to Jerusalem, and the Templars under their new Master, Gerard de Ridefort (surely the worst Master the Templars ever had), were said to have taken control of the gates and streets of Jerusalem. The Templars did not have a seat in the High Court, but they controlled 300 knights and the decision to hold the High Court in Nablus can better be explained as the legitimate desire to avoid Templar pressure than as disloyalty on the part of Tripoli.

In any case, while the bulk of the High Court was meeting in Nablus, Sibylla persuaded the Patriarch to crown her queen in the Church of the Holy Sepulcher.  In addition to the Patriarch (allegedly another former lover of her mother) and the Templars (whose Grand Master had a personal feud with Tripoli), Sibylla was supported by her uncle Joscelyn Count of Edessa and the colorful and controversial Reynald de Chatillon, Lord of Oultrejourdan by right of his wife.  We know of no other supporters by name, but we know that Reynald de Chatillon sought to increase Sibylla’s support by saying she would be queen in her own right without mentioning Guy.  Even Bernard Hamilton, one of Guy’s modern apologists, admits that: "Benjamin Kedar has rightly drawn attention to sources independent of the Eracles [e.g. Ernoul] and derived from informants on the whole favorable to Guy de Lusignan, which relate that Sibyl's supporters in 1186 required her to divorce Guy before they would agree to recognize her as queen.” (The Leper King and His Heirs, Cambridge University Press, 2000 p. 218).

According to these sources, Sibylla promised to divorce Guy and choose another man for her husband as her consort. Instead, once she was crowned, she chose Guy as her consort — and crowned him herself when the Patriarch refused.  Once again, Sibylla had chosen Guy over not only the wishes of her subjects but in violation of an oath/promise she had made to her supporters (not her enemies, note, to her supporters). 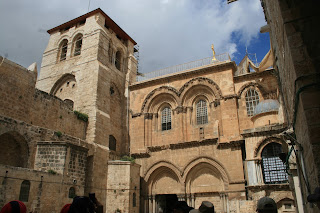 The Church of the Holy Sepulcher where Sibylla was Crowned

With this dual coronation, Sibylla and Guy had usurped the throne of Jerusalem, but without the Consent of the High Court they were just that — usurpers.  The High Court (or rather those members of it meeting at Nablus) was so outraged that, despite the acute risk posed by Salah-ad-Din, they considered electing and crowning Sibylla’s half-sister Isabella. To risk civil war when the country was effectively surrounded by a powerful and united enemy is almost incomprehensible — and highlights just how desperate the opposition to Guy de Lusignan was. In retrospect, it seems like madness that men would even consider fighting their fellow Christians when the forces of Islam were so powerful, threatening and well-led.

Then again, with the benefit of hind-sight, maybe it would have been better to depose of Guy de Lusignan before he could lead the country to utter ruin at Hattin?

In the event, Humphrey de Toron, Isabella’s young husband, didn’t have the backbone to confront Guy de Lusignan. In the dark of night he fled Nablus to go to Jerusalem in secret and pay homage to Guy. With this act, the High Court lost their alternative monarch and capitulated — except for Ramla and Tripoli, the most inveterate opponents of Lusignan.  Ramla preferred to quit the kingdom altogether, turning over his lucrative lordships to his younger brother and seeking his fortune in Antioch. (He disappears from history and we don’t know where or when he died.) Tripoli simply refused to recognize Guy as his king and made a separate peace with Salah-ad-Din — until he was reconciled after a tragic incident in May 1187.

Two months later, Guy de Lusignan proved that Ramla, Tripoli and the majority of the High Court had rightly assessed his character, capabilities and suitability to rule. Guy led the Christian kingdom to an unnecessary but devastating defeat which resulted in the loss of the holiest city in Christendom, Jerusalem, and indeed the entire kingdom save the city of Tyre. Only a new crusade would restore a fragment of the Kingdom and enable Christendom to hang on to the coastline for another century.

With all due respect to revisionism and the legitimate right of historians to question familiar and popular interpretations of events, it is also wise to remember that chronicles and other historical documents provide us with an imperfect and incomplete picture.  The actions and judgment of contemporaries, on the other hand, were based on much more comprehensive knowledge and information than we have available to us today. Based on the actions of Guy de Lusignan’s contemporaries, I believe the Ernoul’s portrayal of Guy de Lusignan is closer to the mark than the apologist image of modern historians.