"Knightfall," a TV series aired by the History Channel, is a fictional drama filled with inaccuracies and misinformation. In cooperation with + Real Crusades History + I will be running a "counter series" in the form of fifteen blog posts  that provide reviews of books about the Templars, a brief overview of their history,  a series of "Ten True Tales of the Knights Templar" followed by an epilogue.

Today, I start by drawing attention to one of the best books about the Knights Templar ever written. 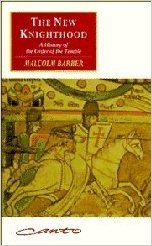 Professor Malcolm Barber is arguably the world's leading academic expert on the Knights Templar, and their trial for heresy under Philip IV of France at the start of the 14th century.  He was a professor of Medieval European History at the University of Reading until he retired in 2004, and has also published important scholarly works on the crusader states and the Cathar heresy.

In The New Knighthood: A History of the Order of the Temple Professor Barber has condensed his encyclopedic knowledge of the Templars into a concise, readable handbook.  This book provides the reader with a solid foundation of facts to counter the still rampant and ridiculous allegations of heresy and mystery regurgitated endlessly by hysterical and irresponsible writers, TV producers and Hollywood.

Barber's  book is organized thematically into chapters on: 1) the origin of the Order, 2) the concept of the Order, 3) the rise of Templar power in the east, 4) the Templars in the period between the battles of Hattin and La Forbie, 5) the last years of the Templars in Palestine, 6) Templar life, 7) the Templar network, 8) the destruction of the Order, and 9) an analysis of the myths that grew up around the Order after its demise. It also provides a chronology of key events, a list of the Grand Masters, and -- what I found most useful and fascinating -- a map with the major houses (commanderies) of the order from Ireland to Greece. (It has helped me find  many a Templar ruin overlooked by others!)

This book is my "bible" on the Templars. I keep it handy on a nearby bookshelf and consult it whenever I have a question about the Knights Templar. I recommend it highly to all readers interested in the 12th and 13th centuries. It should be required reading for anyone who intends to publish a book, film or TV series -- fictional or not -- in which the Knights Templar have a role.

Read her award-winning novels set in the crusader states: