A Radical Revision of Views on Frankish Society

Sadly hidden behind a prosaic title and colorless cover (both of which probably discourage many readers) is one of the most important books on crusader society available today. 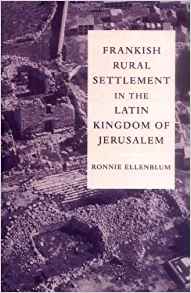 In this seminal work, Ronnie Ellenblum, a professor at the Hebrew University of Jerusalem, challenges the assumptions of prominent 20th-century scholars concerning the composition and character of crusader settlement and society.  He bases his startling conclusions on meticulous (indeed tedious) study of legal documents recording the demarcation and/or sale and settlement of disputes over landed property combined with an intensive archaeological survey of the region north of Jerusalem.

The insights provided here about settlement patterns, the degree of integration with the local Christian inhabitants and segregation from the Muslim population, the sophistication of the agricultural techniques employed, and the levels of conversion to Islam are all invaluable insights that no one interested in the crusades or the Holy Land in the Middle Ages can afford to ignore.


Ellenblum’s research enabled the “reconstruction” of entire villages ― property by property ― identifying in the process the origins and vocations of many of the inhabitants. This survey turned up roughly 200 Frankish settlements, most of which had never been heard of before either because the settlements themselves had since been abandoned, ruined and overgrown, or because their Frankish origins were hidden behind modern Arabic names and more recent construction.


One of Ellenblum’s chief theses is that: “The Franks…were very successful settlers and were not only fighters and builders of fortifications.  The migrants who settled in the Kingdom of Jerusalem established a network of well-developed settlements…includ[ing] the construction of developed castra [towns], of ‘rural burgi,’ and monasteries, of castles that served as centers for seigniorial estates, of smaller castles, manor houses, farmhouses, unfortified villages, parochial systems etc.”


Even more important, Ellenblum proves beyond a shadow of a doubt that the claim of earlier historians such as Prawer and Smail “that the Franks were completely unaware of what went on in their fields (save when it came to collecting their share of the crops), and had no contact with the local inhabitants, is not based on written or archeological sources and is certainly not accurate.” (Emphasis added.)

Although the level of detail and the cataloging of findings can make at times somewhat turgid text and slow reading, it is the level of detail that leaves no doubt that Ellenblum’s findings are based on incontrovertible facts. This book makes all previous conclusions about Frankish society obsolete, and any depiction of Frankish Palestine that does not take Ellenblum’s conclusions into account can be dismissed as inaccurate.

Ellenblum's findings are reflected in my novels set in Outremer.


For readers tired of clichés and cartoons, award-winning novelist Helena P. Schrader offers nuanced insight into historical events and characters based on sound research and an understanding of human nature. Her complex and engaging characters bring history back to life as a means to better understand ourselves.