The Remarkable Career of John de Brienne, Part I


As the 13th-century historian, philosopher and jurist Philip of Novare noted: “A good knight, by the fame of his valour and by his effort, has frequently come to great riches and acquisitions. And many of them have been crowned kings, and others have had great riches and lordships.”[1] To anyone familiar with English history, the example of William Marshal will come to mind. This paragon of chivalry rose from landless knight to regent of England.


Yet like the American West centuries later, it was the Latin East that particularly offered men of ambition great opportunities. In earlier entries, I have talked about Renaud de Châtillon and the Lusignan brothers Guy and Aimery, all of whom were younger sons who rose to crowns through marriage to heiresses in Outremer. Yet no career was more spectacular than that of John de Brienne. John, the younger son of a very minor French count, rose to be not only King of Jerusalem but Emperor of Constantinople as well. 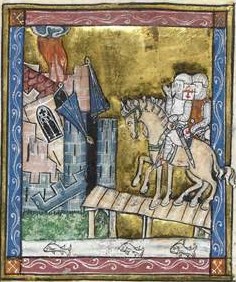 Today I begin a three-part biography of his remarkable career based primarily upon Guy Perry’s biography published in 2013.[2]

John de Brienne was born sometime in the mid to late 1170s ― not thirty years earlier as was long alleged.  He was the fourth son of Count Erard II of Brienne and Agnes de Montbéliard.  The Counts of Brienne were vassals of the Counts of Champagne, and the county itself consisted of a “more or less homogeneous bloc of land ― perhaps no more than twenty miles by twenty ― located in the fertile, prosperous heart of Champagne, not far from the region’s effective capital, Troyes.”[3] John’s father and grandfather had both participated in the Second Crusade, and his father and uncle died at the siege of Acre during the Third Crusade, at which point his elder brother assumed the honor of Brienne as Walter III.

As the fourth son, John appears to have been intended initially for the Church. Unlike his three elder brothers, he did not witness a single one of his father’s charters. However, after his father’s death, he returned to his brother’s court and either made up for lost time or had escaped the monastery before coming home in order to become proficient at arms and horsemanship.  We can be sure of this because his later career included many feats at arms that won the praise of his contemporaries ― all of whom put a premium on knightly skills and were not lightly impressed. Surviving descriptions of him stress that he was “a huge man, tall and powerful.”[4]

John, like the more famous William Marshal, appears to have excelled on the tourney circuit during this phase of his life, but, unlike Marshal, John had been given land by his elder brother to hold in fief to him. That is, he had become a vassal of his elder brother for at least four villages identified by name by 1201, when he would have been in his mid-twenties.

Yet no more might have been heard of him had not his elder brother married Elvira of Sicily, the daughter of the deposed King of Sicily, Tancred. For the sake of a crown, the young count Walter III of Brienne was willing to fight the regents of the young Hohenstaufen King of Sicily, Frederick II. Perhaps the young count’s willingness to fight the Hohenstaufen was colored by having earlier fought with Richard Plantagenet, a one-time prisoner of Frederick’s father Henry VI. Certainly, he benefited from the support of Pope Innocent III, who without recognizing his title, nevertheless provided funds. Yet far more remarkable was Walter de Brienne's initial successes. By 1201, he had defeated forces loyal to the Hohenstaufen and established himself in control of the mainland portions of the Kingdom of Sicily. Meanwhile, due to the deaths of the second and third brothers, John had become the only adult male of the Brienne family besides Walter III. As such, he had been entrusted with ruling Brienne while Walter pursued his crown (or at any rate the large and lucrative principality of Taranto and the county of Lecce) in Southern Italy.

The sudden death of the Count of Champagne gave John an opportunity to exert even greater influence in his native region.  He became a close advisor (some suggest lover) of the widowed Countess Blanche, a connection that was too prove useful later.  Yet, first, he was confronted by a major set-back.  In June 1205 his brother Walter was assassinated, leaving behind a posthumous son, Walter IV, as his heir.  John officially assumed the role of “regent” for his young nephew, and with that access to the revenues of the small but prosperous County of Brienne. Surprisingly, and apparently without opposition, John assumed the title of Count as well. This is perhaps the first indication of his inner ambition, although when his nephew reached maturity John surrendered the title and the county without a fight. 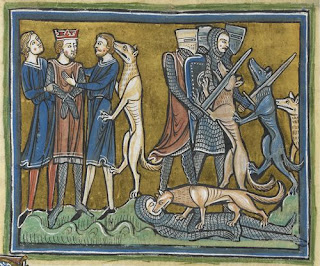 It was at about this same time that the High Court of Jerusalem started to look seriously for a husband (and so king-consort) to the heiress to the Kingdom, Marie de Montferrat. The process remains obscure as too few sources have survived documenting it, but it appears that the High Court first favored a marriage with Peter II of Aragon. Unfortunately for everyone involved, Peter was already married and so had to first obtain a papal annulment of his existing marriage. This proved too time-consuming, and the matter was not pursued beyond 1207.  Apparently, after the Aragon option was abandoned, the High Court appealed to King Philip II of France to name a suitable candidate. There were precedents for this, King Fulk had been chosen in the same way, and also the Duke of Burgundy for Sibylla, although the latter reneged on the agreement. What is unclear is why Philip II chose John de Brienne.

Brienne was clearly not of the first rank among Philip’s vassals, and as such represented a slap-in-the-face to the Kingdom of Jerusalem. On the other hand, there was still a strong Champaignois faction within the Kingdom of Jerusalem, left-overs from the reign of Henry, Isabella of Jerusalem’s third husband, who may have suggested Brienne to Philip.  Even more important, the regent of Cyprus at this time was John de Brienne’s cousin, Walter de Montbéliard. Walter, whose regency was due to end in 1210 when Hugh de Lusignan came of age, may have already sensed that his future would not be so bright after the Lusignan had control of his kingdom (Hugh would accuse Montbéliard of embezzlement and drive him out of Cyprus). In short, Montbéliard may have wanted his cousin in Jerusalem as a means of propping up his own position, or at least providing him a place of refuge, and so put forward the name to the King of France.

Whatever the reasoning and machinations behind the offer, sometime in 1208 John de Brienne was invited by the High Court to marry Marie de Montferrat and through his marriage to her become the King (consort) of Jerusalem. Brienne carefully requested and received permission from his liege and sovereign, Philip II, and then from Pope Innocent III before committing to the marriage.  He clearly recognized that he was of secondary rank and far too poor to bear the burden of the beleaguered Kingdom of Jerusalem without assistance.  He recognized that if he was to be an effective king, he would need powerful backers, men with money and influence, who could help him recruit an entourage sufficiently powerful to change the balance of forces in his future kingdom. 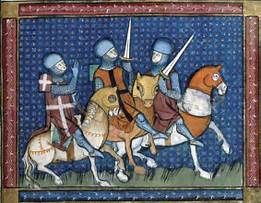 Pope Innocent III gave Brienne 40,000 marks ― not directly mind, but through the Templars and Hospitallers, who were instructed to hold the money and only turn it over to Brienne for purposes that were jointly approved by the respective masters and the patriarch of Jerusalem.  King Philip also provided Brienne with 40,000 livres ― outright.

But money alone would not expand the confined borders of the Kingdom of Jerusalem. Brienne needed knights and men-at-arms to do that, so before setting off to his wedding in Acre, he first spent a year recruiting men to come with him to the Holy Land in the hope of, effectively, launching a new crusade upon arrival which would expand and secure his future kingdom.

The story of John de Brienne will be continued next week.  Meanwhile, enjoy my award-winning novels set in the Holy Land before John’s time: