Frederick II Hohenstaufen has attracted many modern admirers, in large part because he is perceived as an example of religious tolerance, allegedly far ahead of his time. The fact that he was twice excommunicated by the Pope, made him the darling of Reformation and Enlightenment historians, who equated the papacy with everything backward and corrupt. Twentieth Century atheists delight in the fact that Frederick allegedly claimed the Moses, Jesus and Mohammed were all shysters, who made fools of their followers.[i]  The fact that the Sicily he ruled still had large Jewish and Muslim populations, some of whom found employment at his court, qualified him in the eyes of more recent commentators as an early example of “multi-culturalism.” Some admirers go so far as to suggest that Frederick converted to Islam.  Today I look a more closely at Frederick and his relationship with Islam. 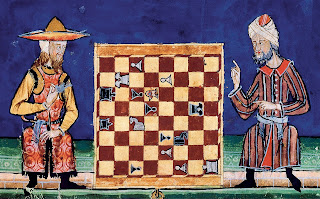 Heiko Suhr in a short paper on this topic published in 1968[ii] identified four factors that contributed to Frederick’s image as pro-Islamic: 1) his childhood in a Palermo allegedly dominated by Muslims, 2) the city of Lucera in Southern Italy populated by Sicilian Muslims who enjoyed complete religious freedom, 3) his culturally and religiously diverse court and his amicable correspondence with Muslim scholars and scientists, and finally 4) his diplomatic relations with al-Kamil culminating in the return of Jerusalem to nominal Christian control without bloodshed.


Unfortunately, for Frederick’s admirers, the legend that he grew up wandering freely through the streets of Palermo, learning fluent Arabic by chatting with the people of the markets and streets, has been exposed as fiction. Not only did Frederick enjoy (or suffer, depending on your perspective) a conventional education for a future king at the hands of predominantly clerical tutors, but Palermo in the decades of Frederick’s youth was no longer predominantly Muslim. In fact, the Muslim population of Sicily had already been pushed into the mountainous interior (where they were to offer armed resistance to Frederick on more than one occasion). The educated Arab elites had withdrawn even farther -- to Muslim-held Spain or North Africa rather than submit to Christian subjugation.


The city of Lucera, established in 1246 toward the end of Frederick's reign, did indeed provoke the outrage of the Pope because it was full of mosques, and the entirely Muslim population lived openly according to their faith.  Even more problematic for the Pope, as Muslims, they couldn’t have care less about being excommunicated or put under interdict.  In short, the Pope had no weapons with which to threaten or intimidate them, and they were utterly loyal to Frederick.  The fact that Lucera sat in a vital geo-strategic position that blocked the access of papal forces to Foggia and Trani undoubtedly made him livid. 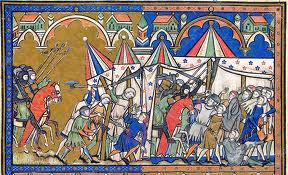 Yet, it is important to remember that the creation of Lucera followed the expulsion of the entire Muslim population from Sicily proper.  This expulsion was Frederick’s response to a renewed Muslim revolt. Historians estimate that between 15,000 and 60,000 Muslims were forced to leave their homes and re-settle in Lucera.  In short, Frederick was not exhibiting humanitarian tolerance for his Muslim subjects, but rather pursuing the strategic goal of removing rebellious subjects from the heartland of his kingdom. To his credit, he did not massacre them, but with what was truly ingenious foresight recognized that he could use them in his struggle with the pope because they were his only subjects that could not be bullied by papal threats.


Turning to Frederick’s famed erudition which included correspondence with a wide range of scholars from Spain to Syria, there is little question that his fascination with scientific, philosophical, and intellectual problems was exceptional. Frederick II conducted experiments (apparently without the slightest concern for the welfare of the participants), and he took part in public, mathematical debates. This is impressive, but by no means as exceptional as Frederick’s admirers suggest. The education of princes was very rigorous and included languages, theology (not just dogma), mathematics and natural sciences. Frederick’s contemporary Louis IX of France was also highly educated, for example, including a sound grounding in ancient Greek and Roman texts.


The fact that Frederick II corresponded with Arab scholars and he spoke Arabic is also far less exceptional that historians (particularly German historians) make it appear. The biographies of Frederick II which I have read (an admittedly limited sample) reveal an astonishing ignorance of the history and society of the crusader states. The fact that most knights and nobles in Outremer also spoke Arabic, that they too corresponded with Saracen leaders, and that some could translate Arab poetry into French has escaped the notice of the admirers of Frederick. Frederick was not the first or only Western monarch to recognize the humanity and intellectual qualities of individual Muslim leaders. Richard the Lionheart developed a degree of rapport with al-Adil before Frederick II was even born. The bottom line is that a command of Arabic had nothing to do with an admiration for Islam.


Far more indicative of a cultural attraction to Islam than correspondence with Arab intellectuals is the fact that Frederick maintained a harem full of sex-slaves.  This was in clear violation of Church law, and not comparable to a succession of mistresses as, say, Henry II of England had. 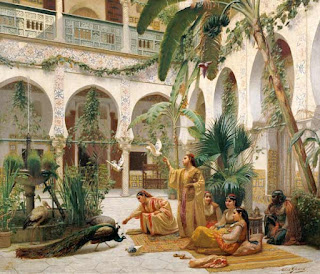 Frederick’s campaign to the Holy Land likewise presents hints of a more tolerant attitude toward Islam than was common among the Hohenstaufen’s contemporaries.  This has nothing to do with the fact that Frederick preferred negotiations to bloodshed. Any and every general prefers to win without risking battle. Richard the Lionheart, the ultimate soldier’s soldier so often portrayed as a mindless killing machine, likewise sought to negotiate with Saladin almost from the moment he set foot in the Holy Land. (See Diplomacy of the Third Crusade Part I and Part II.)


Far more damning are the terms of the treaty Frederick concluded.  By accepting a “demilitarized” Jerusalem surrounded by Muslim-controlled territory, he revealed that he cared only about a temporary victory ― the medieval equivalent of a “photo op” in the shape of him wearing his crown in the Holy Sepulcher. The truce (it was never a treaty because it had a limited duration of ten years, five months and forty days) served not the interests of Christendom, but rather the Emperors desire to thumb his nose at the Pope. The truce was about show rather than substance. The fact that the truce prohibited Christians from setting foot on the Temple Mount effectively added insult to injury, and it is not surprising that the Patriarch of Jerusalem characterized the terms of the Treaty as “unchristian.” 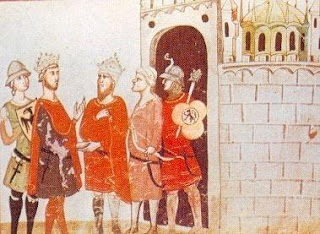 Added to this is an incident recorded in Arab sources of Frederick rebuking the Qadi of Nablus for silencing the muezzins during his short visit to Jerusalem. According to al-Gauzi, Frederick went so far as to claim that his “chief aim in passing the night in Jerusalem was to hear the call to prayer given by the muezzins, and their cries of praise to God in the night.”[iii]


Despite such apparently pro-Islamic words (assuming they are correct at all), the rest of Frederick’s life does not square with a man who had a genuine affinity for Islam. Within a few months he had sailed away,  and returned to Sicily ― where he proceeded, as noted earlier, to expel every last single Muslim from the island.


Frederick II was not pro-Islam, rather he appears to have been profoundly cynical about religion. The legend about him saying Moses, Jesus and Mohammed hoodwinked the gullible, while not a genuine quote, may nevertheless capture his skepticism about faith generally.  The Arab chroniclers certainly saw him as a materialist. A man who played with religion and theology, rather than respecting God. Devout themselves, they had more admiration for genuine Christians (like St. Louis) than for Frederick Hohenstaufen.


While it is impossible to know a man’s soul ― particularly after nearly 1,000 years ― it is fair to say that Frederick consistently put “raison d’état” ― not to say self-interest ― before religious considerations. His sexual gratification was more important than respecting church law. Returning to Sicily with the appearance of regaining Jerusalem, was more important than securing a sustainable solution for the Holy City. Retaining his temporal power was more important than finding a compromise with the Pope. Having soldiers impervious to papal influence was worth allowing Muslims to publicly exercise their religion (under the nose of the Pope, so to speak.) And so on. While this may arouse admiration in many, it is hardly something particularly modern. Nor, in my opinion, does it qualify Frederick to be viewed as particularly “enlightened,” “tolerant” or “modern.”


Frederick II is an important character in "Rebels against Tyranny" and his curious "crusade" an important part of the plot of this novel, the first in a new series set in the crusader states.


Dr. Helena P. Schrader holds a PhD in History.
She is the Chief Editor of the Real Crusades History Blog.
She is an award-winning novelist and author of numerous books both fiction and non-fiction. Her three-part biography of Balian d'Ibelin won a total of 14 literary accolades. Her most recent release is a novel about the founding of the crusader Kingdom of Cyprus. You can find out more at: http://crusaderkingdoms.com
Posted by Helena P. Schrader at 8:16 AM