The Man who Defied an Emperor - John d'Ibelin Part I 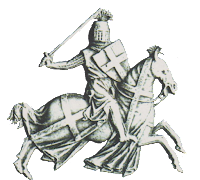 John d'Ibelin was born in 1179, the eldest son of the Baron of Ibelin and the Byzantine princess and Dowager Queen of Jerusalem, Maria Comnena. While born to privilege, he was only eight years old when Saladin destroyed the Christian army at the Battle of Hattin and over-ran all of John's inheritance. In just weeks, he lost both from his mother's vast holdings at Nablus to his father's more modest barony at Ibelin. He found himself trapped in Jerusalem with tens of thousands of refugees, until his father, one of the few barons to escape from the debacle at Hattin, obtained a safe-conduct from Saladin to ride through Saracen-held territory and bring him, his mother and siblings to safety. However, his father was soon persuaded to remain in Jerusalem and assume command of the defense. So John left Jerusalem not with his father but with an escort of Mamlukes sent by Saladin a gesture of exceptional chivalry. We can only speculate on how these tumultuous events impacted the character of one so young.


John d'Ibelin next enters the historical record ten years later, when as youth of 18 or 19 Aimery de Lusignan, newly crowned King of Jerusalem, named him Constable of Jerusalem -- a prestigious and important royal official. The Constable was responsible for commanding the feudal army in the absence of the king. The position had been filled by such outstanding men as Humphrey II of Toron, a well-respected and highly-educated nobleman, and by Aimery de Lusignan himself. Baffled by how a youth such as John could hold the title and even more confounded by the fact that he was awarded it by a man alleged to be his father's enemy, historians have suggested the title had suddenly become "nominal." But there is no evidence of this.


On the contrary, John's appointment suggests rather that 1) there was no serious breach between Aimery de Lusignan (as opposed to Guy de Lusignan) and the Ibelins, and 2) that John had matured rapidly in the turbulent years 1187-1197. Although we can not prove it, we cannot exclude the possibility that he was at his father's side (he was old enough to serve as a squire after all) during the Third Crusade, gaining insight into strategy, warfare and diplomacy from Richard the Lionheart and his father.  In any case, by 1197 King Aimery was prepared to appoint him to one of the most important and influential royal offices. It did not hurt, of course, that John was half-brother Queen Isabella of Jerusalem, Lusignan's new wife and the woman through whom he had gained the crown.

John may have been appointed by Lusignan, but he was no puppet. Within a year of his appointment, Lusignan accused the Tiberias brothers, Ralph and Hugh, of an attempted assassination and banished them from the kingdom. Lusignan acted without a judgement of the High Court, and for this John d'Ibelin reproached him. Although his objections did not deter the king, it is significant that at these early stage in his life he was involved in a legal case involving the rights of vassals and the role of the High Court.


John's stand on this matter did not negatively impact his good relationship with King Aimery. Indeed, to the end of his life John d'Ibelin spoke highly of King Aimery, particularly his understanding of legal matters. It was, after all, under King Aimery that an attempt was made to write down the laws of Jerusalem, the records of which had been destroyed during the capture and sack of the Kingdom during the years of Saladin's invasion and occupation. The result of this effort was known as the Livre au Roi. Conceivably, Beirut was active in supporting King Aimery in this endeavor, as throughout his life he retained a reputation of knowing the laws of the kingdom exceptionally well.  In deed, his opinion on legal matters was so renowned that in latter years no one felt qualified to challenge him. 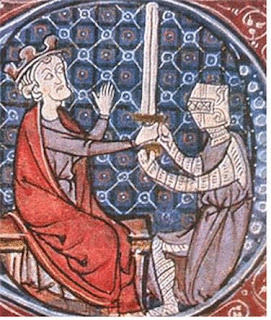 Indeed, he constructed one of the most magnificent palaces in the Latin East. The Bishop of Oldenburg traveling through the Holy Land in 1212 described a palace with tall glazed windows opening on the sea or on beautiful gardens, with walls paneled with polychrome marble, life-like mosaic floors, vaulted chambers painted like the night sky, and fountains gushing fresh water day and night. In short, within roughly a dozen years of obtaining Beirut, John d'Ibelin had the means to build lavishly and exquisitely. In terms of quality and taste, it undoubtedly didn't hurt that his mother was a Comnenus, a family famous for fostering a renaissance of Byzantine art. (Maria Comnena was, incidentally, still alive when this palace was built.)

Yet even before the Bishop could give a witness to John's successful revitalization of Beirut, King Aimery, Queen Isabella and their only son died in quick succession. Isabella's oldest daughter, Marie de Montferrat,was the left heir to the Kingdom of Jerusalem. It was April 1205, and Marie was just 13 years old.  The High Court of Jerusalem selected Marie's closest male relative on her mother's side (from which she derived the throne) as her regent; this was John d'Ibelin, Lord of Beirut.

So at the "ripe old age" of 26 John became the de facto King of Jerusalem. He ruled for the next five years wisely and without incident, maintaining the existing truce with the Saracens. During his tenure he married another of his sister Isabella's daughters, Alice, to the King of Cyprus, and negotiated the marriage of his charge, Queen Marie de Montferrat, with the man selected by the King of France at the request of the High Court of Jerusalem: John de Brienne. When John de Brienne at last arrived in the Kingdom of Jerusalem to wed his bride and be crowned king-consort, John's "reign" ended. So far there was no reason to think he would be come the leader of a rebellion against the Holy Roman Emperor, but at the age of 31 he had held the pinnacle of power -- and peacefully surrendered it again.


Dr. Helena P. Schrader holds a PhD in History.
She is the Chief Editor of the Real Crusades History Blog.
She is an award-winning novelist and author of numerous books both fiction and non-fiction. Her three-part biography of Balian d'Ibelin won a total of 14 literary accolades. Her most recent release is a novel about the founding of the crusader Kingdom of Cyprus. You can find out more at: http://crusaderkingdoms.com
Posted by Helena P. Schrader at 4:33 AM