Kerak - The Castle of the Robber Baron of Oultrejourdain

The Castle of Kerak has become inextricably associated with the infamous Reynald de Châtillion, the Lord of Oultrejourdain in the late 12th century. Indeed, the Arabs referred to Châtillion as “al-Karak”— of Kerak. The castle, however, is greater than its most famous lord, serving both the Ayyubids and the Mamlukes as a center of power as well. Today it is a still impressive reminder of Crusader military architecture. 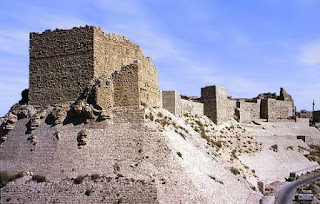 The construction of Kerak (also Karak, Kerak in Moab and Karak al-Shawbak) began in 1142 in the reign of King Fulk and Queen Melusinde. The construction was undertaken by Payen (also Pagen) the Butler, Lord of Montreal and Oultrejourdain.

It was constructed on Roman foundations, but its design was mostly dictated by geography.  It was built on the very tip of a promontory or spur formed by two steep gorges. To the east, south and west, the land dropped almost vertically to the valley floor some 3,000 feet below. To the north, as the spur of the ridge widens slightly, is the town of Kerak.  In medieval times the castle was separated from the town by a deep fosse that cut across the entire width of the spur and could only be crossed by a draw bridge.

Because of the sheer sides of the cliffs to the east, south and west, siege engines could only be brought to bear from the north after capturing the town. To capture the castle it was also necessary to fill in the deep fosse separating it from the town. The castle itself had two walls facing the vulnerable north, the first flanked by two towers and the second reinforced by five towers. Vaulted chambers on two levels backed up against the inside of the inner wall and could also be used as fighting galleries. Altogether the castle’s situation and design caused a number of Arab commentators from the 12th to 14th centuries to conclude it impregnable.

However, the castle was also designed to withstand long sieges. It had a massive cistern, ample cellars for storing food, and accommodation for a substantial garrison. It was divided into two long wards that ran north south, the western of which was narrow and appears to have been used for stables and the like, while the upper/eastern ward contains the chapel and the better accommodations. 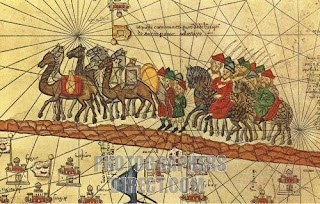 Kerak is located beyond the Dead Sea in what is now Jordan. It lay along the lines of trade and communication between Egypt and Syria, or (in Crusader times) the Sultanates of Cairo and Damascus. It also lay along the main pilgrimage route from Turkey and Syria to Mecca. Yet the town, high above the desert, had been a Byzantine bishop’s seat and remained predominantly Christian throughout the period of Arab occupation from the mid-7th century to the establishment of the crusader kingdom of Jerusalem.

In 1176, Reynald de Châtillion married the widowed Stephanie de Milly, the heiress to Kerak. He used the castle as his base to pursue a aggressive policy against Salah ad-Din. Although frequently portrayed as a “renegade” interested only in his own profit, a number of serious crusades historians have pointed out that, far from being senseless, his attacks served strategic goals. (For details see: http://www.crusaderkingdoms.com/reynald-de-chatillon.html)  It was precisely because Châtillion’s raids humiliated and threatened Salah ad-Din’s lines of communication to his power-base in Egypt that the Sultan came to see Châtillion as a personal enemy.

Salah ad-Din moved against Châtillion in 1183, laying siege to Kerak in November. By chance the siege commenced during the celebration of the marriage of Châtillion’s stepson, Humphrey de Toron IV, to Princess Isabella of Jerusalem. Among the guests visiting the castle for the nuptials were Isabella’s mother, the dowager queen of Jerusalem, Maria Comnena, and the queen mother, Agnes de Courtney.

The relief of the castle was delayed by the unanimous refusal of the assembled barons of Jerusalem to fight under the leadership of the king’s brother-in-law, Guy de Lusignan. Guy had been named regent of the kingdom earlier in the year because the king was suffering from leprosy that was becoming increasingly debilitating. Only after King Baldwin IV agreed to resume the rule of his kingdom and lead the feudal army himself did the feudal army come to the relief of Kerak.  Despite being delayed by roughly a month, the appearance of the force was enough to induce Salah ad-Din to lift his siege. 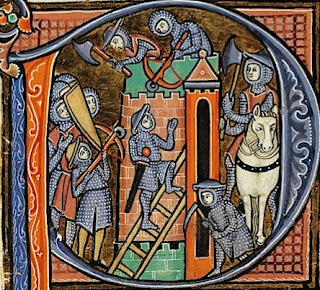 The sultan returned the following year, 1184, prepared to fill in the fosse and take the castle by storm.  Yet again, the arrival of the Frankish army forced him to lift the siege.  For a second time he withdrew his forces without a fight.

After the Christian defeat at Hattin, Salah ad-Din executed Reynald de Châtillion immediately and -- according to some accounts -- personally. This act made Kerak  the property of Châtillion’s step-son Humphrey de Toron IV.  Toron had been captured at Hattin and was Salah ad-Din’s prisoner. The Sultan attempted to exploit this fact to negotiate the surrender of Kerak in exchange for the release of Toron. The garrison refused, so Salah ad-Din dispatched his brother al-Adil to reduce Kerak. After roughly one year, in November 1188, the garrison surrendered. Most sources agree they were not out of food much less water.  Rather, the hopelessness of their situation, since there was no longer a feudal army capable of coming to their relief, or possibly disease is believed to have led to the surrender. 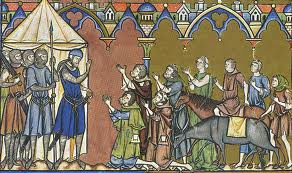 Salah ad-Din granted the castle to his brother al-Adil, who made it one of his power-bases and treasuries. He re-fortified parts of it and built or embellished the accommodations turning them into a (rough) palace in 1192. Thereafter, it served as the administrative center for what is now essentially Jordan under the Ayyubids.

With the fall of the Ayyubids, Kerak passed into the control of the Mamlukes, who also used it as a power base, deepening the fosse and improving the fortifications and accommodations. Finally the Ottomans used the castle as an administrative center for the region, but it’s relevance in defense had long since been lost. Today it is a tourist attraction, open to the public, and can be visited.

Kerak is featured in the first two volumes of my Jerusalem Trilogy, particularly in award-winning Defender of Jerusalem, which describes Salah ad-Din's siege of 1183 in detail.

Dr. Helena P. Schrader holds a PhD in History.
She is the Chief Editor of the Real Crusades History Blog.
She is an award-winning novelist and author of numerous books both fiction and non-fiction. Her three-part biography of Balian d'Ibelin won a total of 14 literary accolades. Her most recent release is a novel about the founding of the crusader Kingdom of Cyprus. You can find out more at: http://crusaderkingdoms.com
Posted by Helena P. Schrader at 10:03 PM