Medical Care in the Crusader States

It has long been thought that "Saracen" medicine was far superior to Western medicine, and film and fiction often contrast "barbaric" (not to say sadistic) Western/Christian ignorance to sophisticated and enlightened Saracen/Muslim practice. Yet recent scholarship has demonstrated that the differences between "Eastern" and "Western" medicine were far less significant than was assumed. A closer examination of the sources has also revealed that most "Eastern" physicians and practices praised by contemporaries were native Christians rather than Muslims. Perhaps most surprising of all: the standard of treatment was remarkably sophisticated and included highly complex procedures from hernia and cataract operations to (limited) brain surgery.  Below is a short comparison of Eastern and Western medicine followed by a summary of contemporary practices based Piers D. Mitchell’s seminal work Medicine in the Crusades: Warfare, Wounds and the Medieval Surgeon. Piers D. Mitchell is an osteoarchaeologist. 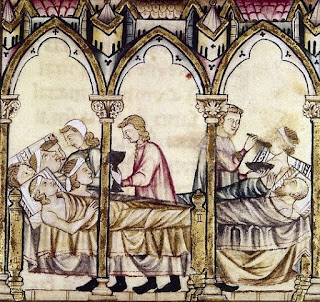 Before turning to the state of medical knowledge in the crusader era, it is important to understand where it came from. On the one hand, "Saracens and Christians shared the same conceptual framework for medical science, which they inherited from the classical world." (1) On the other hand, both East and West had a body of practical knowledge for treating wounds particularly based not on theory but on experience, i.e. empirical knowledge. Whereas both Christian and Muslim physicians based their theories of medicine on classical Greek texts about the four "humors" of the body, their treatment of concrete cases of injury and illness varied based more on climate, availability of pharmaceuticals, and tradition.

It has frequently been noted by crusades historians, that the residents of Outremer were quick to turn to "Eastern" doctors, leading most commentators to assume a superiority on the part of "Muslim" doctors. There are several weaknesses to this approach. First, some of the presumed superiority was due simply to greater familiarity with both the diseases common in the Middle East and the ingredients (most derived from locally available products) available for treatment.

More important, however, is the fact that many of these "Eastern" doctors were not Muslims at all, but rather native Christians. The fact that many native Christians of the Levant spoke Arabic by the time the Crusaders arrived and had adopted Arab-sounding names has misled students of the crusades to assume the physicians named and praised were also Muslims and their knowledge of medicine derived from Arab rather than Greco-Roman traditions. Yet, in fact, "when [contemporary] Western sources referred to 'oriental' or even 'Saracen' doctors, it usually meant only that they were natives of Outremer, and their language was Arabic. Most were probably Eastern Christians."(2)  For example, the famous and influential medical scholar Ibn Butlan was a Christian who spent most of his life in Byzantine Antioch. 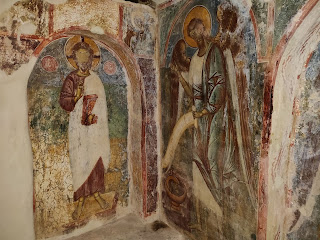 Negative views of crusader medicine have also been derived from Muslim sources. Yet, it is important to remember that the Islamic world in this period looked down on Christians as "backward" and "barbaric" based not on specific examples but rather on a fundamental world view of Islam  -- and so all aspects of Muslim society -- as inherently superior to all other religions. As the newer religion, it was understood "as being...a corrective to the misunderstandings that had crept into the religious practices of the earlier recipients of the religion of Abraham."(3)

Famously, Usama ibn Munqidh's memories highlight two examples in which European medical treatment resulted in the death of the patient. Yet these anecdotes do not prove that the procedures were standard, nor can we know if the patient died because of the treatment was inherently incorrect or incorrectly executed by the practitioner. Furthermore and often overlooked is the fact that Usama also notes two "effective cures the orientals learned from the occidentals: the use of wine to disinfect wounds, and an ointment for scrofula."(4)

With that let me turn to a brief description of common medical procedures in the crusader states. 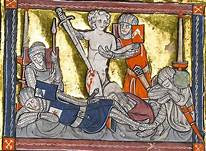 Based on available records, it has been calculated that between 15 and 20 of knights on crusade died in battle or as a result of wounds obtained there; the proportion of foot soldiers lost due to military engagement was probably higher.  Nevertheless and surprisingly for modern readers, very many more survived their wounds due to competent medical treatment.

In the 12th and 13th centuries, the weapons employed produced first and foremost puncture wounds (from arrows, lances and swords), followed by cuts/amputations caused by swords and axes, fractures/crushed bones caused by maces and stones thrown from siege engines, and, last but not least burns from Greek fire, boiling pitch and water. The fundamental treatment for each of these kinds of wounds does not differ significantly from what is recommended today.

Medieval medical practitioners and soldiers, for example, understood the essential fact that a man can bleed to death. When treating puncture wounds, stopping hemorrhaging was, then as now, the primary concern. The difference between arteries and veins was likewise understood, and the need to stop arterial bleeding as rapidly as possible recognized. The use of the tourniquet and precise cauterizing were both known, and surgeons were expected to be able to close off arterial bleeding with their fingers long enough to apply a cautery.  Not only is the procedure for this carefully described in medical texts of the period, but there are also numerous recorded instances of men surviving this treatment and recovering so completely that they could fight again without impediment.

While amputations were likewise cauterized and cuts were bound, or if necessary, sewn back together, arrows presented additional problems. Although it would have been rare for an arrow to hit an artery, the arrow itself often remained in the wound and the need to remove it was paramount. But many arrows were designed to do more damage if pulled backwards (out the way they went in) by the addition of barbs or the shape of the arrowhead itself.  Medieval surgeons, therefore, had the option of pushing it through the injured man and out the other side or waiting for the wound to putrefy and the surrounding tissue to become soft enough to make it easier to remove.  Horrible as this sounds, the fact that many knights are described fighting with multiple arrows stuck into their armor suggests that it may have been comparatively rare for an arrow to become so deeply embedded that it was life-threatening ― without killing outright as in the case of arrows to the throat, eyes, armpits, etc.

In the case of broken bones, the need to set bones to ensure they mended straight and functional was likewise recognized. Bones were held in place by splints, bandaging or plaster ― or a combination thereof. In the case of burns, the primary concern was to prevent blisters from forming and the wound from completely drying. Moist cooling the wound was thus the recommended treatment, whether by means of placing the affected limb in a bowl of liquid, applying wet compresses soaked in herbs or the application of ointments. 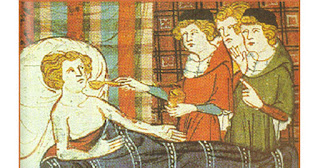 
Surprisingly (at least for me), the use of anesthetics during operations or the treatment of wounds was common.  An anesthetic was given to the patient either in a drink (usually wine) or placed on a sponge that was then held to his/her nose. Mitchell notes that the various plants recommended for preparing anesthetics (e.g. henbane, hemlock, poppy, deadly nightshade, mandragora root and lettuce seed to name a few) have been demonstrated to have pain-killing and or sedative effects. He hypothesizes that “cocktails” combining several of the recommended ingredients could have been very potent ― and dangerous if the dose was miscalculated or the extracts improperly prepared. Patients in the crusader states were lucky to have ready access to one of the most effective narcotics known to man: opium. Mitchell writes that there is evidence of its use for medicinal (rather than recreational) purposes by the Franks in the crusader states. 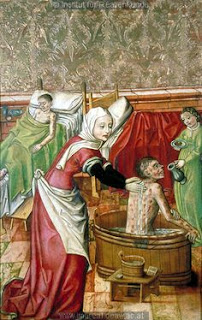 Next week I will address the evolution of hospitals, something Edgington describes as the most impressive development in crusader medical care. (5)


1. Susan B. Edgington, "Oriental and Occidental Medicine in the Crusader States," in The Crusades and the Near East: Cultural Histories (London: Routledge, 2011), 189.
2. Edgington, 197.
3. Niall Christie, Muslims and Crusaders: Christianity's Wars in the Middle East, 1095-1382, from the Islamic Sources (London: Routledge, 2014), 77.
4. Edgington, 201.
For the description of contemporary medical treatments, the principal source is Medicine in the Crusades: Warfare, Wounds and the Medieval Surgeon, by Piers D. Mitchell, Cambridge University Press, 2004.
5. Edgington, 208.


Throughout my award-winning, "Jerusalem" trilogy and my newer books lifestyle in Outremer is depicted as realistically as possible.


She is the Chief Editor of the Real Crusades History Blog.
She is an award-winning novelist and author of numerous books both fiction and non-fiction. Her three-part biography of Balian d'Ibelin won a total of 14 literary accolades. Her current series describes the civil war in Outremer between Emperor Frederick and the barons led by John d'Ibelin the Lord of Beirut. Dr. Schrader is also working on a non-fiction book describing the crusader kingdoms. You can find out more at: http://crusaderkingdoms.com
Posted by Helena P. Schrader at 10:35 AM