The House of Ibelin

First Hollywood and now Sharon Kay Penmen have both devoted a film and a novel to Balian d'Ibelin respectively. Yet, historically, Balian was only one, and by no means the most important, member of the House of Ibelin. In the weeks ahead, I will be reviewing the history of the Ibelins -- a topic to which I also devote a chapter in my forthcoming book "Beyond the Seas: The Story of the Crusader States." 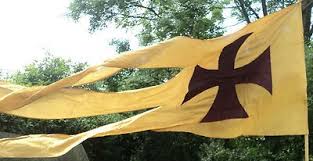 Sons of the House of Ibelin held many noble titles over time: Lords of Ibelin, Ramla and Mirabel, Caymont, Beirut, Arsur, and Count of Jaffa and Ascalon, the last traditionally a royal domain and title of the heirs to the throne.  The daughters of Ibelin married into the royal families of Jerusalem, Antioch, Cyprus, and Armenia. Ibelins served as regents of Jerusalem and Cyprus on multiple occasions and they led revolts against what they viewed as over-reaching royal authority, most notably taking on the Holy Roman Emperor Friedrich II in 1229-1233.  They were respected as scholars. One translated Arab poetry into French, another (John of Jaffa) wrote a legal treatise that is not only a goldmine of information about the laws of the crusader kingdoms but is admired for the elegance of its style and the sophistication of its analysis.  The Ibelins also built magnificent palaces, whose mosaic courtyards, fountains, gardens, and polychrome marble excited admiration.

The Ibelins exemplified the Latin East in many ways. They were rich, luxury-loving, patrons of the arts, yet they were also fighting men who could hold their own against Saracens, Mamlukes or their fellow knights. They were highly-educated and multi-lingual. Their whose diplomatic skills won the admiration of Saladin and Richard the Lionheart; their legal reasoning confounded the "Wonder of the World," Emperor Frederick II.


During the 7th crusade led by St. Louis, the head of the Ibelin family attracted the amazement of the French Seneschal Jean de Joinville who wrote:

[Ibelin’s] galley came to shore painted all over above and below the water with armorial bearings, or a cross paté gules. He had full three hundred oarsmen in the galley, and each man had a shield bearing his arms, and with each shield was a pennon with his arms sewn in gold. (Joinville’s “Life of St. Louis,” Chapter 4: Landing in Egypt.)

A splashier display of wealth was hardly imaginable in the midst of battle and seems a  microcosm of the wealthy, luxury-loving yet militant crusader states.
Yet the Ibelins also exemplified the crusader states in another way: the origins of the family are completely obscure, and the first Ibelin was almost certainly an adventurer, a man of knightly-rank but without land or title in whatever country he originated.

Members of the House of Ibelin are the protagonists in six of my published novels and two novels yet to come.
For readers tired of clichés and cartoons, these books offer nuanced insight into historical events and figures based on sound research and an understanding of human nature. The complex and engaging characters bring history back to life as a means to better understand ourselves.