The Black Death ... and Other Pandemics

It started in the east where it had already claimed "countless lives," according to contemporary chronicles. It could be contracted through direct contact with the afflicted. It could kill so quickly that a man could go to bed healthy and die in his sleep. It killed doctors in front of their patients, parents before their children, lovers in each other's arms -- and there was no known cure: 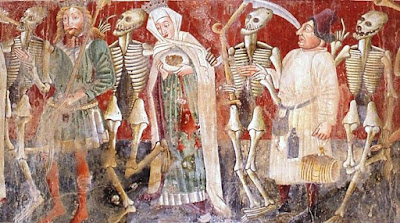 No one knows for sure where this fourteenth-century pandemic originated, but it traveled along the silk road, reaching the Crimea in 1343. In October 1347, it went ashore in Sicily transported on Genoese ships, but also in Alexandria. From Sicily, it spread to Genoa and Venice, then to Pisa, Florence and Rome. Meanwhile, the first shipload of infected sailors had gone ashore at Marseilles in January 1348. It spread then along the rivers and roads across the Languedoc to Bordeaux and from there to Paris. It reached England and Portugal by June 1348 and spread across Germany and Scotland in the following year. In 1349 it had reached the outer edge of Europe - Norway. Then spread eastwards again sweeping across Russia in 1351. Meanwhile, between 1347 and 1349 it had devastated Egypt, Palestine, Syria and the al-Jazeera. 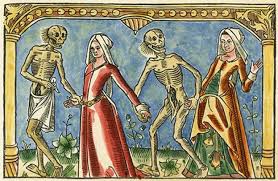 In its wake, the Black Death left an estimated 200 million people dead worldwide. In Europe, between 45 and 50 percent of the population had been wiped out. Death rates varied considerably from country to country, however. Scientists now believe that Mediterranean cities suffered most severely with death rates of perhaps 80% in some cities, while northern Europe was comparatively spared. England and Germany probably lost no more than 20% of their inhabitants.

Since the end of the 19th century, the Black Death has been presumed to be bubonic plague. Based on epidemics of this disease in the Crimea and India, it was hypothesized that the disease was carried by fleas on rats, who moved to humans when the rat host died. This hypothesis pre-supposes, of course, that medieval humans were unhygienic, and even noblemen and the most wealthy merchants -- in the Arab world as well as the West -- were constantly covered in fleas. The explanation, however, fit in with the then-prevalent view of the Middle Ages as a period of ignorance, superstition, and filth.

Aside from the fact that the latter is not true, in the last fifty years, a number of different scientists have questioned the 19th-century explanation of the Black Death. The DNA tests have been inconclusive, despite sensationalist reporting.  The skeptics also point to a number of characteristics of the 14th-century pandemic incompatible with bubonic plague. For example, the speed at which it spread (from Sicily to England in nine months) given the means of transportation at the time, is incompatible with what has been observed in modern bubonic plague epidemics. Furthermore, the alleged carriers of the disease, the fleas, could not have survived in the climate of northern Europe. Then there's that pesky detail about the dead rats. Since the rats had to die first, surely at least one of all the hundreds of accounts written by eyewitnesses would have made at least some mention of dead rats being everywhere? Of the rat corpses piling up alongside the human ones?

Alternative theories for the cause of the Black Death include anthrax -- a virulent, infectious disease that frightens us even today in this age of exemplary hygiene.

But it doesn't really matter what caused the Black Death in the mid-fourteenth century because something like the Black Death could never happen nowadays. After all, we live in an enlightened and scientific age. We are intelligent and we understand hygiene. We have flush toilets, disinfectants, rubber gloves, and hand sanitizer -- not to mention antibiotics and anti-viral drugs.

We could never be surprised by a disease that spreads from Asia and infects people so rapidly that our first-class, (compared to the MIddle Ages infinitely more superior) healthcare systems are overwhelmed. It's impossible for modern people, who are oh so much cleaner than those benighted slobs of the Middle Ages, to get sick just by going to some public event or traveling on a luxury -- wonderfully clean and certainly not flea-infested -- cruise ship. No, we are so, so superior to our medieval ancestors that we could never, ever be struck by a pandemic at all!