The Decline of Eastern Christianity: A Review

The Decline of Eastern Christianity under Islam:
From Jihad to Dhimmitude
by 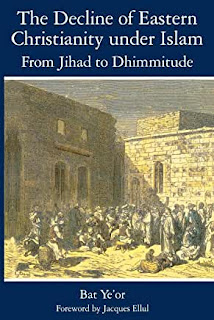 Bat Ye’or’s book is a comprehensive and significant work, which examines a topic far too often ignored in histories of the Middle East, Islam and the crusades: the fate, status and experience of Christians and Jews living under Muslim rule from the 6th to the 19th centuries. It is based on a wealth of documentary evidence drawn from Arab, Turkish, Armenian, Latin, Greek and Balkan sources. It includes a discussion of the sources and a 23 page-long bibliography. It also analyzes the historiography to date and provides an appendix of documentary evidence supporting her principle theses, translated into English, which encompasses 175 pages of evidence.


In short, this is an eminently well-researched and meticulously documented scholarly book rather than a polemical or popular work of history — which perhaps explains why it has not received the prominence it is due. Another factor contributing to the apparent neglect of this important work is that it depicts the fate and represents the views of the victims, who are now for the most part exterminated, forgotten and powerless, in contrast to narratives written from Arab/Islamic or Western European perspectives. I can’t help but wonder if the fact that Ms. Ye’or is an Egyptian, a woman, and a Jew but not a professor, has not also contributed to her work being unjustly slighted by academics, without anyone undertaking a serious refutation of her basic findings.


Ye’or notes that the most common terminology for Jews and Orthodox Christians in Muslim states is as “protected minorities.” This very term, she argues, is misleading. The Orthodox Christians were throughout most of the 1,300 years covered in this book the majority population of the states in which they lived. Second, they were not ‘protected’ but rather, in the course of more than a thousand years, gradually driven to near extinction. This book describes in great detail how that came about.


Ye’or is careful to note the acquiesce and indeed collaboration of key elites in the conquered communities. In the beginning, “treaties” with the ravaging nomadic tribes from the Arabian Peninsula seemed like common sense and self-defense once the imperial powers of Byzantium and Persia became too weak to protect the local population. Paying “tribute” seemed like the lesser evil to hopeless defiance.


Ye’or likewise describes without apology the rivalries and hatred between the various Christian sects and their anti-Semitism, factors that enabled the Muslim conquerors to effectively play the groups off against one another. She makes no secret of the religious fanaticism among some Christian monks, which undermined a sense of solidarity among the Christian subjects of Islam. Ye’or is also quick— and nowhere more bitter — than in pointing out that it was above all the religious leadership that profited from the new situation. Christian and Jewish leaders alike became the representatives of their respective communities and were made responsible for collecting the tribute and paying their Arab masters. This gave them greater autonomy than under the former Byzantine regime, while also offering multiple opportunities to enrich themselves. Last but not least, Ye’or freely acknowledges and highlights the degree to which some elites — secretaries and translators, accountants and bankers, merchants and professionals —adapted to the new situation and, in exchange for collaboration, were allowed to prosper — at the expense of the vast majority of the co-religionists.


Yet Ye’or musters overwhelming and almost numbing evidence that the vast majority of Christians and Jews living under Islamic regimes were subjected to frequent waves of violence punctuated by periods of oppression and humiliation. She describes how the repeated extortion of money, goods, livestock, and even children, reduced entire populations to such destitution that they abandoned their lands altogether and fled into the mountains to be hunted down like outlaws and wild beasts. She describes how the repeated raids by nomadic tribes turned entire regions into wastelands, because no crop could be sown much less harvested. “The once-flourishing villages of the Negev had already disappeared by about 700, and by the end of the eighth century the population had deserted the greater part of the region stretching from south of Gaza to Hebron, fleeing back northwards, abandoning ruined churches and synagogues.” (102) This depopulation and desertification of once-flourishing and densely populated regions, described in full by both Muslim and Christian chroniclers, was the result of the massive deportation of captives — that is the enslavement of entire populations.


Yet even during periods of comparative stability when the caliph and/or sultan was able to exert his authority over the tribes and, out of self-interest in the revenues derived through the exploitation of the subject peoples, prevent outright slaughter and deportation, the situation of the conquered non-Muslims was deplorable. The non-Muslim population enjoyed no legal protections because their word was considered worthless in an Islamic court. They were required by Sharia Law to live in smaller and more dilapidated houses. They were not allowed to build houses of worship, to conduct any religious rite or ceremony in public, and were prohibited from wearing symbols of their religion. They were required to wear distinctive clothing and carry proof that they had paid their taxes. They were forbidden from riding horses or camels and from bearing arms.  The Muslim population was actively encouraged to demonstrate contempt for non-Muslims by shoving them aside or otherwise demeaning them. And they were always just a false-move away from being robbed and beaten by the mob (or just hooligans) or enslaved for some alleged crime.


No, that is not the politically correct narrative that has been popular in Western Europe and the Islamic world for the last two centuries. But Ye’or has the evidence — the chronicles and the statistics — on her side.


Furthermore, as she notes, the treatment of the non-Islamic inhabitants of Dafur at the hands of the Muslim Sudanese rightly outraged the international community — yet this treatment is identical, indeed the formulaic, meticulously documented and theologically justified treatment of conquered populations in Egypt, Palestine, Syria, Anatolia and the Balkans. The descriptions of the raids, extortion, capture of children, ransom of captives, enslavement and destruction of entire villages recorded by the UN and various aid organizations in Dafur read exactly like the chronicles describing Arab conquests in the Middle East in the sixth to ninth centuries. Why were Sudanese actions in Dafur “atrocities” and the Arab conquest of the Middle East and Balkans “enlightened”? Why are the peoples of Dafur victims and the Christians of Egypt, Palestine and Syria “protected” and “privileged”?


Tragically, the myth of Islamic tolerance is now so deeply embedded in modern perceptions of the medieval world that I will no doubt be vilified and insulted for writing and publishing this review. Yet it is precisely because this book challenges politically correct versions of history with irrefutable evidence drawn from contemporary sources, including Arab and Turkish sources, that this book deserves to be read and discussed — not ignored or dismissed.

The status and contribution of Orthodox Christians to the crusader states is a constant theme of my novels set in the Holy Land in the era of the crusades: