Democracy in the Middle Ages

On the eve of the U.S. Elections, it is perhaps useful to reflect that democracy didn't always look like this. Representative Democracy with periodic elections is not even necessarily the most "perfect" from of democracy. It is worthwhile considering the fact that in Ancient Greece, for example, democracy was direct and participatory -- for that privileged male elite that were considered "citizens."

More surprising for most people living today, however, is that notion that direct and participatory democracy played an important part in the Middle Ages too. Indeed, one could argue that in terms of individual participation in daily decision-making affecting one's immediate life "democracy" was more widespread in the Middle Ages than it is today. 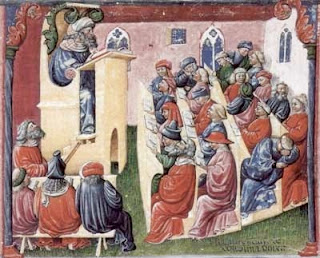 In the Middle Ages society was communal and consensual as well as hierarchical. The medieval peasant was not a slave taking orders, but a member of society required to participate in consensus-building in daily life. At the village level, for example, every village was run by the residents who decided collectively — that is in a direct democracy — about a variety of issues in daily life such planting, crop rotation, and solving common problems from pests to drainage.

In the courts, judgments were reached by a jury, not handed down by the lord or judge, and those jurors were elected by their communities. Democracy was also practiced on a daily basis inside the various professional organizations such as the guilds. These again regulated their own affairs, approved and rejected members, set standards, terms of service, wages, and defined qualifications, dealt with crises, and elected their officials.

Likewise each abbey, convent and priory elected their abbot and/or prior. Bishops and Archbishops were likewise — at least theoretically — elected by the cathedral chapter, although royal interference was notorious. Between elections, the members of each house met daily in “chapter” to discuss issues, resolve problems and reach decisions — collectively and by consensus if possible, by majority vote if necessary. That too is direct democracy. Leprosariums were run entirely by the inmates, who likewise elected their leaders and spokesmen, including women, and governed their affairs by talking about them together and coming to decisions. That is democracy. 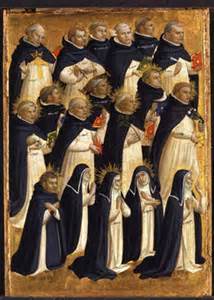 Obviously every parliament was also a form of democracy, albeit with comparatively limited franchise. Nevertheless, the entire feudal class sat on the High Court of Jerusalem, for example, which meant they had a say in making laws, making treaties and judging their peers.

Finally, the crusades were run by committees and assemblies in which every participant had a voice. At these assemblies "the non-noble elements...periodically acted in concert to influence the decisions of the leaders who regularly consulted them." [Riley-Smith, 63] During the First Crusade, for example, the common soldiers threatened to elect their own leaders unless the princes agreed to leave Antioch and the march to Jerusalem. In the Third Crusade, the common soldiers twice forced Richard the Lionheart to undertake a march toward Jerusalem against his better judgment. Only with great difficulty was Richard able to dissuade them from making a costly attempt at an assault -- both times in an assembly of crusaders where every man had a voice. That too is a form of democracy. For more on this see: Commanding a Crusade

How often do you sit down to discuss with your neighbors, your colleagues or your fellow-soldiers to decide what to do next?

All my novels set in the crusader states attempt to reflect medieval society realistically. Find out more at: https://www.helenapschrader.com/crusades.html