The Church of the Nativity, Bethlehem - A Short History

According to Christian traditions, 2,020 years ago today Joseph of Nazareth and his pregnant wife Maria, went to Bethlehem, the birthplace of Joseph, in order to comply with a Roman edict to register for a census. They found the city of Bethlehem full to overflowing, and were unable to find a room in either in an inn or the home of Joseph’s relatives. In consequence, they lodged in the cave behind the residence of Joseph’s family in which, as was common at the time, livestock and stores were kept.  (To this day, this is a custom in the region.) Here Mary gave birth to a son, Jesus. 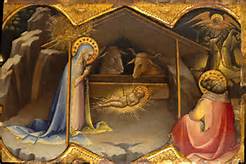 At the time of his birth, Jesus was not of particular importance, hence his birthplace was not in any way noted, marked or honored. It was only after he had died that some of his followers sought to locate the place where he had been born. Since this was within the living memory of many of his friends and family, it is not improbable that the house in which Joseph and Mary had stayed--and the stables attached to it--could be accurately identified.
Following the Jewish uprising of 132-135, Hadrian ordered Roman temples erected on top of all Jewish and Christian holy sites. Over the cave in Bethlehem, revered by the small but significant Christian community still resident in Palestine, a temple to Adonis was built. Although certainly an insult to Christians of the time, it was a fortuitous development for later generations since it effectively marked a location that might otherwise have been lost from memory.
In 312, Constantine became Roman Emperor and raised his mother Helena to the rank of Empress. Helena had converted to Christianity and within a year of coming to power, Constantine issued an edict that ended the persecution of Christians.  Thereafter and throughout his reign, Constantine was to protect and serve as a patron to the Christian church, without, however, fully suppressing pagan rites.
Helena, however, had been an early convert to Christianity and after her son’s rise to ultimate power, she traveled to Palestine in search of the sites of Christ’s passion. According to Christian traditions, she located the site of the crucifixion, excavated the cross on which Christ had been crucified, and also found the tomb in which Christ had been buried. While her son commissioned the construction of a church over the Holy Grave (the Church of the Holy Sepulcher in Jerusalem), Helena is credited with commissioning the construction of a church on the site of Christ’s birth to replace the temple to Adonis.
Helena’s church was a five-aisled basilica, some of the mosaics of which are still visible to this day. However, in  529, this church was destroyed in a revolt by the Samaritans.

In 540, Emperor Justinian I sponsored the construction of a new basilica over the foundations of the old that stood over and incorporated the cave in which Christ had been born. When Palestine was overrun by the Persians in 614, they destroyed all the churches and monasteries, including Constantine’s church over the Holy Sepulcher — except for the Church of the Nativity in Bethlehem, which was spared. The portal of the church was a mosaic depicting the adoration of the magi or Three Wise Men in which the magi were shown wearing “oriental” robes.  Based on their dress, Persians invaders recognized the figures in the mosaic as Persian priests; out of respect for their own priests they spared the church.  It is this church that can still be found in Bethlehem today, although the mosaic that saved it from destruction has itself since been lost.
In 640, Bethlehem fell to the forces of the Muslim Caliph Omar. Omar, rather than destroying the Church of the Nativity, used it as a place of prayer.  Thereafter, parts of the church complex were reserved for Muslim worship. This preserved the church from destruction by less tolerant Muslim leaders such as Caliph el-Hakim, who demolished the Church of the Holy Sepulcher again.
When the Crusaders reached Palestine in 1099, they took possession of Bethlehem before launching the assault on Jerusalem. The population of Bethlehem was still predominantly Christian at the time and welcomed the crusaders.

With the establishment of the Christian Kingdom of Jerusalem, Bethlehem became the seat of a bishop. It remained part of the royal domain, however, and Baldwin of Bouillon was crowned the first King of Jerusalem in the Church of the Nativity. A tradition followed by his successor, Baldwin II, but not subsequent kings, who preferred to be crowned in the Church of the Holy Sepulcher.
The Church of the Nativity became the second most important pilgrimage destination in the Christian world after the Holy Sepulcher itself.  As Christian pilgrims flooded to the Holy Land, the city of Bethlehem enjoyed an economic boom. This was supplemented by massive investments on the part of the crusader kings to restore a church that was in a state of significant disrepair when the crusaders arrived. Especially under King Baldwin III and King Amalric I, both of whom were married to Byzantine princesses (Theodora and Maria Comnena respectively), the restoration work was carried out by artists with very high levels of sophistication and influenced by Byzantine traditions -- and partially paid for by the Byzantine Emperor.
The most extensive mosaics from the crusader period are found in the Church of the Nativity, and 28 frescos dating from the twelfth century can still be identified.  Furthermore, under Christian rule, religious orders were re-established in the Holy Land and a beautiful Romanesque cloister was built adjacent to the Church of the Nativity which can still be visited today.
All that ended with the devastating defeat of the Christian army at Hattin on July 4, 1187.  Bethlehem had no defenses. It fell without a fight to the army of Saladin, and, except for a brief interval from 1229 to 1244, it remained in Muslim hands until it came under the British Protectorate in 1920. Under the various Muslim leaders, Bethlehem became impoverished again. In 1516, the town had only 100 inhabitants. Meanwhile, the church fell into increasing disrepair. The marble wall panels were ripped out to be used in other construction. In 1646 the tin roof was torn off and melted down for other purposes. The Church would almost certainly have become a complete ruin had not the Greek Orthodox church set out to restore the church with the tolerance of the Ottoman rulers in 1670.
Unfortunately, the eighteenth and nineteenth centuries saw a bitter fight between the Greek Orthodox,  Roman Catholic and Armenian churches for control of the Church of the Nativity. Meanwhile, earthquakes, fires and uprisings damaged both the church and the town of Bethlehem.
In 1920 Bethlehem came under British administration, and in 1948 fell to Jordan. In 1963, the city numbered roughly 60,000 mostly Christian inhabitants, but the number fell dramatically after Israeli occupation. Today, Bethlehem suffers visibly from the political situation and the tensions between Palestinians and Israelis.
Nevertheless it is still worth a visit. To be sure, the mosaic mural depicting the adoration of the magi that saved the Church from Persian destruction has been lost, but St. Helena’s floor mosaics can still be seen, as can the mosaic murals of the crusader kings and the crusader-period cloisters. Most important, of course, beneath the high alter in the crypt of the church is the cave in which, according to two thousand years of tradition, Christ was born over 2000 years ago.
Dr. Helena P. Schrader is the author of six books set in the Holy Land in the Era of the Crusades. Find out more at: https://www.helenapschrader.com/crusades.html