During the last century, the assumption was that during the reign of the Lusignans the Latin elite oppressed and despised the Greek Orthodox majority. However, historians of the 21st century have uncovered a wealth of evidence that suggests rather than tensions or mere tolerance, the dominant feature of religious life in Frankish Cyprus was mutual respect and joint worship. 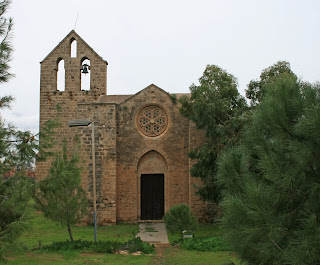 The key to understanding the religious situation on Cyprus is to recognize that the Catholic Church in the 12th and 13th centuries did not view Greek Orthodoxy as either heretical or schismatic. Throughout the period of Frankish rule in Cyprus, a succession of popes confirmed that the differences between the churches were ones of "rites" (i.e. practice) rather than doctrine.

The tensions that misled historians of the last century into hypothesizing hostility and oppression were -- on closer examination -- competition between the clergy of the respective churches, not tensions between the believers of either church. Rather than dogma and theology, the two issues that agitated the Latin Church were access to Greek Orthodox lands and other sources of income and the primacy of the pope. The resident Greek clergy, on the other hand, was primarily concerned about retaining control over the lives of their flock and autonomy from Rome.
The Latin church hierarchy on Cyprus incessantly nagged the crown and Latin nobles for more land and more income sources not from greed alone. It was also a reflection of the fact that the Greek church had, contrary to popular assumptions, suffered very few expropriations in the course of the conquest.  Furthermore, the land that was taken away was never that on which churches or monasteries stood, but rather the productive estates that had generated income for those institutions. The beneficiary of those land-grabs, however, was not the Latin Church but rather secular lords during the first decade of Lusignan rule.

The Greek Orthodox Church was undoubtedly impoverished by the exodus of wealthy Greek aristocrats who had been it's most lavish patrons. It lost some of its economic land-holdings as well, but it retained all its churches and the tithes of the Orthodox population. The Latin Church, in contrast, had a very small population of Latins which it could tithe and otherwise had to live from donations. Notably, the secular lords of Cyprus repeatedly backed the Orthodox Church in stopping the Latin Church from claiming the lands of the Greeks -- in large part to protect their own properties! 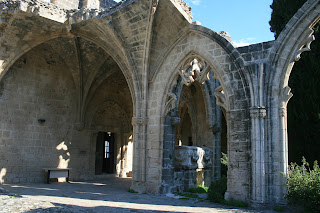 The other principal point of tension, the primacy of the pope, was superficially doctrinal, but in practice an issue of prestige. Initially, the Cypriot clergy steadfastly refused to take an oath of fealty to the pope in Rome. Eventually, after a series of negotiations, the Cypriot clergy opted to swear fealty in exchange for effective autonomy. Professor Schabel summarized the deal as follows:

Greek Orthodoxy survived the Frankish period not so much because of a successful national struggle against complete absorption as because the Greeks always remained the majority and neither the Franks nor the Latin Church ever attempted any Latinization. The Latin Church required what it thought was the bare minimum from the Greek clergy -- nothing from the Greek laymen -- and the Greek clergy gave the Latin Church what it required, including by the end of the thirteeth century, an oath of obedience from the bishops and an end to active opposition concerning unleavened bread. Almost all other particulars of the Greek rite, what we now call Greek Orthodoxy, were allowed to remain the same. [Chris Schabel, "Religion" in Cyprus: Society and Culture 1191 - 1374, editor Angel Nicolaou-Konnari and Chris Schabel, 201; italics addded by HPS]

The drawn-out struggle between the Latin and Greek clergies, however, had very little impact on daily life or popular attitudes. Only on three occasions in the history of Frankish rule on the island did the inter-clerical disputes rise to the level of popular unrest. Two of these instances, both from the fourteenth century, were riots "lasting only a matter of hours and directed successfully at the actions of a single outsider." [Schabel, 207] The other incident was far more serious and shocking. It entailed the burning at the stake of thirteen Orthodox monks in the mid-13th century. 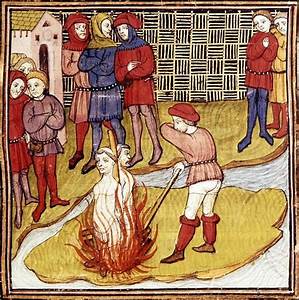 The execution of thirteen Orthodox monks dates to either 1231 or 1232 -- in either case to a period of "chaos" when King Henry I was not yet of age. Indeed, King Henry was very probably not even present in his kingdom as from February until June 1232 he was in Syria with his regent and all his barons. Furthermore, the Latin Archbishop of Nicosia was also absent from the kingdom much of 1231 and early 1232. Most significantly, from May to mid-June, the Kingdom of Cyprus was occupied by the forces of the Imperial Marshal Riccardo Filangieri.

In short, Cyprus was effectively without its legal rulers either secular or ecclesiastical for this critical period.  It appears that this fact was exploited by outsiders with no history of peaceful co-existence. At the urgings of a certain Dominican friar -- the Order of the Inquisition and possibly fresh from fighting the Alibigensians -- the Greek Orthodox monks were condemned to die a heretic's death. Yet, as the documents prove, they were not condemned because they used leavened bread, but rather "because for years they refused to stop calling the Latins heretics for using unleavened bread." Schabel suggests that despite knowing that the pope did not consider the use of leavened bread heretical, the Dominicans could "not tolerate the Greek accusation that they were heretics for their practice." (Schabel, 196).
Sadly, these images of intolerance and violence, isolated and unrepresentative as they were, have dominated the popular image of the relationship between the churches on Cyprus. In fact, Frankish rule was characterized not only by tolerance but by patronage that fostered an expansion of Orthodox building. 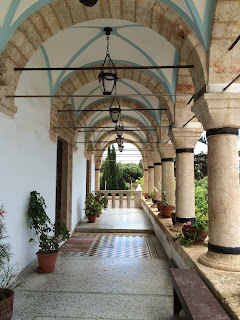 For example, the Frankish period saw a flourishing of Greek Orthodox monastic activity on the island. The number of monasteries on Cyprus more than doubled from 40 under Byzantine rule to over 100 by 1363. While a number of these monasteries were Latin (the Hospitallers, Dominicans, Franciscans, Benedictines, Cistercians, and Augustinians all had three to four houses on Cyprus), Orthodox monasteries undoubtedly made up the vast majority of these religious houses. Furthermore, Orthodox parish churches, even in rural areas, also experienced an inflood of donations that enable renovations and redecoration. Far from languishing in oppression, the Orthodox church flourished under the Lusignans.
There were a number of reasons for this. First and foremost, the Lusignans viewed themselves as the kings of all Cypriots, not just the Latin Cypriots. The Lusignans and their (often Ibelin) wives regularly made generous donations to Greek Orthodox institutions. The nobility also made significant gifts to Greek Orthodox institutions, and there are recorded instances of Italian merchants doing the same. Indeed, by the fourteenth century at the latest, Latin prelates were complaining about "the noble and plebeian women" frequenting the churches of the Greeks, while their husbands "barons, knights, and burgesses" preferred to attend mass in private chapels. 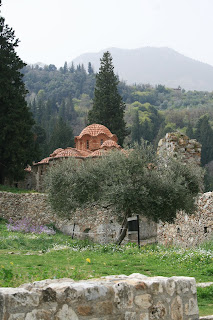 This situation arose primarily because of the large number of marriages between Latins and Greeks. With the Greek population so dominant, many immigrants found their wives among the local Greek population. The Italians, notoriously, left their wives at home, and one wonders how many took local "wives." Meanwhile, the rising Greek middle class that dominated the bureaucracy and increasingly merged into the gentry made good matches for younger daughters of poorer knights.
Another factor in the gradual slide toward Orthodoxy on the part of the Frankish population was the sheer lack of Latin parish churches. Even in Nicosia, the capital and heart of Frankish Cyprus, the Latin Cathedral was the only parish church. The suffragan bishops also had their cathedrals, but for Franks living outside the main cities, those living on their estates, there were no Latin churches at all. As a result, we have instances of Latin knights and ladies buried in Orthodox churches. The assumption must be that during their lives they also regularly attended mass at these churches, confessed their sins to the Orthodox priests, and possibly married and baptized children there as well. 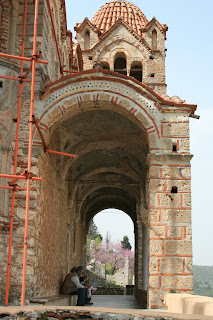 Even those Latins who remained true to their traditions gradually absorbed elements of Greek religious culture into their lives and churches. Cypriot saints such as Barnabas, Hilarion, and Epiphanios were worshiped in Latin as well as Orthodox churches. Latin patrons developed a taste for icons, particularly the vita icons that surrounded a portrait of the saint with scenes from his/her life. Frankish artisans became adept at producing icons. Indeed, icons have been found with labeling in the same hand in both Greek and Latin, suggesting that they hung in churches used by both Greek and Latin congregations. 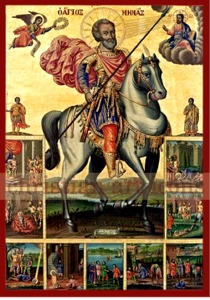 In short, despite the bickering between the Latin and Greek clergy over hierarchy and income, for the average Cypriot whether Greek and Latin the shared belief in Christianity was paramount. Rather than hostility or tensions, the people of Cyprus worshiped Christ and his saints together evolving a distinctive form of almost ecumenical sacred architecture and other art forms.

For more on the disputes between the Cypriot clergy and the pope as well as the evolution of unique art forms see: Nicolaou-Konnari, Angel and Chris Schabel (eds). Cyprus: Society and Culture 1191 - 1374 (London: Brill, 2005).
My most recent novels set in medieval Cyprus reflect this overall atmosphere of inter-faith cooperation punctuated by moments of tensions: