Debunking Myths About the Middle Ages: Part I - Autocratic KIngs and Oppressed Subjects

Today I begin a five-part series debunking common misconceptions about the Middle Ages. In this series I will look at 1) Autocratic Kings and Oppressed Subjects, 2) Brutal Barons and Illiterate Knights, 3) Serfs like Slaves, 4) Clerical Ignorance and Bigotry, and 5) Widespread Filth and Disease. 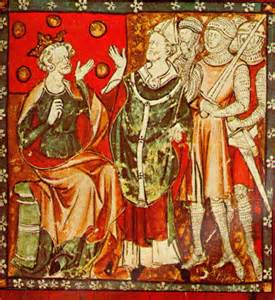 One common myth about the Middle Ages is that kings were all-powerful, and their subjects were oppressed, intimidated and utterly without legal protections.  Effectively, people with little information about the Middle Ages project backward the characteristics of totalitarian states upon medieval feudalism ― mixed together with images of Hollywood kings (usually Henry VIII) shouting “off with her head.”
Aside from the fact that Henry VIII was a “Renaissance” king and not medieval at all, the entire notion of absolutism is a post-feudal concept or, more correctly, anti-feudal. The essence of feudalism was a hierarchical pyramid of mutually beneficial agreements. Simplified: between the king and his barons, barons and their knights, knights and their peasants. Feudal oaths bound both parties and established duties on both sides. In its simplest form, the subordinate pledged loyalty in exchange for a promise of protection from the superior.

Feudalism evolved because in the early feudal period life was very uncertain and only powerful men had the resources to build castles and hire fighting men to protect ordinary peaceful farmers. Those peaceful farmers, often the descendants of slaves agreed to till the land in exchange for being protected by their feudal lord from bandits, raiders, and enemies. Knights too entered a contract with a lord, but rather than tilling the soil, they brought service with horse, sword, and lance. The important point was that they did this in exchange for land (a fief) which gave them both income and status. Although at the top of the pyramid the contract is most difficult to grasp because the power relationships between kings and their vassals were not always straight-forward (e.g. Henry Plantagenet and Louis VII of France), in theory it too entailed loyalty on the part of the vassal (baron) in exchange for good-governance by the king. 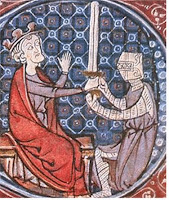 The operative point is that kings had obligations to their subjects. They owed them good governance which entailed not just defense but also the administration of justice, i.e. the maintenance of “law and order.” A king who failed to deliver good governance could legitimately be challenged by his barons for breach of contract. Thus from Magna Charta and the Oxford Provisions to the wars against Frederick Hohenstaufen in the Holy Land, barons challenged their king because of real or alleged abuses of royal power or failure to ensure peace and good governance.

A major criticism that came up again and again in English history, for example, was the failure of a king to consult his barons, i.e. to prefer his “favorites” (who were often men of lower birth) to his “natural” advisors, i.e. the great magnets/barons of the realm. This epitomizes the contractual nature of feudal oaths: while barons pledged to advise the king, in return he pledged to consult his barons. This obligation on the part of the king to consult with his barons was the basis of Parliament in England, the High Court in Jerusalem, and the Curia Regis in France.

In short, medieval kings needed to take into account the advice and interests of their tenants-in-chief (which included the most important ecclesiastical lords because of their vast land-holdings), but they were also expected to ensure “good governance” for the lowliest in the land as well. Because feudalism was based on mutual consent and obligations in both directions, the right of either party to sue for breach of contract was implicit in the system. Thus peasants and serfs, although in the first instance subject to the courts of their direct lord, could appeal to the royal courts.  Louis IX, one of the most outstanding medieval monarchs, went so far as to institute special courts of inquiry to investigate allegations of corruption on the part of his own administrators and officers.

This leads us to another important feudal concept: the right to judgment by one’s peers.  What this meant was that, although a seigniorial officer presided over a court, the judgment itself was given by a jury composed of people from the defendant’s own class. The idea that a lord could legally order punishment without a trial is erroneous. Of course, the operative word here is “legally.”  Men with power often act illegally, and in an age where wealth and weapons were generally held in the same hands, it was particularly easy to abuse power. Yet it is still important to remember medieval justice was jury justice ― still common in the Anglo-Saxon world but replaced across most of Europe with justice handed down by trained judges, who rarely share the social status, background or problems of the defendants.

Feudalism ended slowly as powerful monarchs across Europe gradually consolidated their power at the expense of their barons and then evolved an ideology, “the divine right of kings,” to justify their usurpation of power. The concept of “the divine right of kings” ended the notion of a contract between ruler and subjects, and replaced it with the idea that the kings derived their power directly from God. While history books still tend to describe this as “progress,” it was in fact regressive. It weakened the checks-and-balances on the abuse of royal power that had been inherent in the feudal system.
The balance between the kings and barons and the contractual nature of feudalism is reflected in all Dr. Schader's novels set in the Middle Ages.


For readers tired of clichés and cartoons, award-winning novelist Helena P. Schrader offers nuanced insight into historical events and figures based on sound research and an understanding of human nature. Her complex and engaging characters bring history back to life as a means to better understand ourselves.
Find out more at: https://www.helenapschrader.com/crusades.html