Jerusalem under Islam - A Re-Examination

Much has been made of the fact that the Crusaders prohibited both Jews and Muslims from settling in Jerusalem after the establishment of the Christian Kingdom of Jerusalem. This is usually contrasted with the tolerant attitude of the Muslims in the years preceding the First Crusade. But just how tolerant were the Muslims? 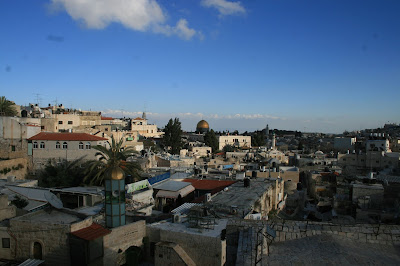 Most of what has been written about the status of non-Muslims in the Islamic world focuses on the theories propounded by Muslim scholars of the golden age and anecdotal case studies of non-Muslim, especially Jews, who rose to positions of privilege and power. Certainly, the Islamic jurists developed sophisticated theories about the treatment of "peoples of the book." Furthermore, some privileged dhimmis enjoyed wealth, status and even (indirect) power.

However, a more thorough examination of the sources -- Arab, Turkish, Coptic and Syriac -- demonstrates that there was a gigantic discrepancy between the fine-sounding theories of the legal texts and the reality on the ground. While a comparatively small elite of non-Muslims enjoyed comparative immunity from discrimination and oppression, the vast majority of Christians, particularly the rural peasantry that made up the bulk of the population was systematically decimated by massacres, reduced to slavery or -- at best -- impoverished by taxation (tribute), arbitrary theft of land and moveable property, pillaging, raids, and often saw their children carried away as slaves.

Thus, while for most of the years of Muslim occupation, the Christians were allowed to live in and visit Jerusalem, they were consistently subjected to various forms of oppression and humiliations and periodically subjected to more extreme persecution from the destruction of churches and monasteries to outright slaughter.

Professor Rodney Stark in his excellent work: God’s Battalions: The Case for the Crusades,(Harper, 2009) lists the following incidents:

As for every day life for Christians under Muslim rule, I strongly recommend Bat Ye’or’s The Decline of Eastern Christianity under Islam which documents in detail (supported by hundreds of Arab, Turkish, Coptic and Syrian documents) the bitter reality of “dhimmitude.” In addition to land expropriations and the payment of annual tributes — including slaves (read people being forced to surrender their own children into slavery), it catalogues the discrimination in clothing, housing, transportation and employment as well.

Another excellent book is Professor Dario Fernandez-Morera’s book The Myth of the Andalusian Paradise: Muslims, Christians and Jews under Islamic Rule in Medieval Spain (ISI books, 2016). Although the book focuses on Spain rather than the Holy Land, it provides a wealth of detail and evidence. The chapter on “The Christian Condition: From Dhimmis to Extinction” is particularly informative.

For those who do not have the time or inclination to read either of these book's here is an excerpt from Stark:

A great deal of nonsense has been written about Muslim tolerance — that, in contrast to Christian brutality against the Jews and heretics, Islam showed remarkable tolerance for conquered people, treated them with respect, and allowed them to pursue their faiths without interference…The truth about life under Muslim rule is quite different.

It is true that the Qur’an forbids forced conversions. However, that recedes to an empty legalism given that many subject peoples were “free to choose” conversion as an alternative to death or enslavement….

In principle, as “People of the Book,” Jews and Christians were supposed to be tolerated and permitted to follow their faiths. But only under quite repressive conditions: death was (and remains) the fate of anyone who converted to either faith. Nor could any new churches or synagogues be built. Jews and Christians were prohibited from praying or reading their scriptures aloud — not even in their homes or in churches and synagogues — lest Muslims accidentally hear them.

... from very early times Muslim authorities often went to great lengths to humiliate and punish dhimmis — Jews and Christians who refused to convert to Islam. It was official policy that dhimmis should “feel inferior and…know ‘their place’… (Stark, pp.28–29).

Compared to systematic humiliation and oppression, maybe the right to live in Jerusalem wasn't the mark of a particularly "tolerant" policy after all?

Dr. Schrader's comprehensive study of the crusader states is available for pre-order on amazon.com.
Order now!