The numbering of crusades is an anachronism, introduced centuries after the armed pilgrimages to the Holy Land were over. What we call the "First Crusade," the campaign that ended in 1099 with the successful recapture of Jerusalem by an armed host from Western Europe, was not the first attempt by a hoard of armed Westerners to re-establish Christian control of Jerusalem. It was actually the second such movement. The first crusade called forth by Pope Urban II's appeal for aid to the Holy Land has gone down in history as "the People's Crusade." 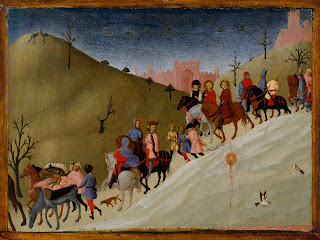 The Byzantine Emperor had asked for military aid and expected mercenaries. The pope, on the other hand, sought to organize something grander. He diligently coordinated with leading secular lords for an armed expedition to be led by noblemen and composed of well-armed and provisioned knights. What neither the emperor or the pope had anticipated was that the pope’s highly-organized and systematic preaching campaign would inspire tens of thousands of common pilgrims, many of whom were non-combatants, to set forth for the Holy Land.
When the phenomenon became apparent, the pope back-watered frantically. He prohibited monks from leaving their monasteries. He told priests to absolve the unfit, infirm, destitute and women of crusading vows. He wrote to the rulers of states confronting the Moors to assure them their job (and that of their subjects) was to continue that fight, not join the expedition to the east. But the ‘genie’ was out of the bottle.

The pope’s inspired preachers, it seems, had been too successful and far more dangerous, they had imitators. Charismatic leaders, the most famous and successful of which was a certain preacher known Peter the Hermit, gathered thousands of followers around them and started for Jerusalem on their own.

Peter the Hermit recruited thousands of pilgrims in France, and then crossed into Germany, where he was equally successful. Although some knights and isolated nobles joined his improvised host, the preponderance of those who joined his ranks came from lower classes and most were armed with farm and household implements. Many were women. The majority had little to lose and no understanding of the risks. Many appear to have believed that their devotion alone would induce an all-powerful Christ to sweep aside the heathens. This mass pilgrimage to Jerusalem was more a messianic movement than an armed expedition.

Poor, but expecting God to provide for them, they had no means to pay for provisions along the way. Instead, they felt entitled to steal from the inhabitants of the Christian kingdoms through which they passed, provoking clashes. Only the speed with which the Byzantine Emperor made provisions available at his own expense prevented worse incidents. Nevertheless, a mob of pilgrims pillaged the suburbs of Constantinople after reaching the city in July 1096. Meanwhile, in their wake, a second wave of pilgrims undertook a series of violent attacks directed at Jewish communities, notably in Speyer, Worms, Mainz, Trier, and Cologne. Peter the Hermit might have inspired his followers with his preaching, but he could not control them.

The Byzantine Emperor had requested military aid; he had not invited the destitute and deluded. He had expected trained and battle-hardened fighting men like the familiar Varangians, not peasants and shopkeepers armed with hoes and hammers. Particularly shocking was the significant number of women and children.  Byzantine contempt for this hoard was only magnified when, against the advice of the Emperor, these masses of pilgrims insisted on continuing their march. No doubt secretly glad to be rid of this useless mob of plunderers and trouble-makers, the Emperor graciously provided transport across the Bosporus in early August 1096, and the People's Crusade Muslim controlled territory for the first time.

Once East of the Dardanelles, the host split into two contingents based largely on language. By the end of October, they were all dead or enslaved. First the German component, and then several weeks later the French had been lured into a trap, surrounded and defeated by the Turks. Those that converted to Islam were sent East as slaves, and those that did not were killed on the spot. The stragglers, those recruited in Germany and responsible for the attacks on Jews, followed in their footsteps and were wiped out in the spring of 1097. Although there are no reliable aTccounts of how many were killed and captured, historians suggest that as many as 20,000 people were lost in this ill-judged expedition.

The "People Crusade" was a tragic prelude to the establishment of the crusader states in the Near East. A comprehensive history of the crusade states is forthcoming from Pen & Sword and can be pre-ordered now at: 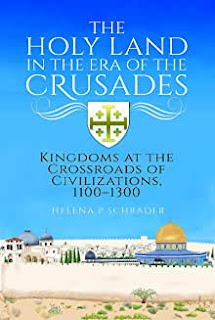 Dr. Helena P. Schrader is also the author of six books set in the Holy Land in the Era of the Crusades: