The Third Crusade - Part I

The fall of Jerusalem sent shock waves through Europe. Pope Urban III allegedly died of grief on hearing the news. His successor Gregory VIII issued a call to crusade just nine days later in a papal bull that blamed the catastrophe on the sins of all Christians and summoned everyone to acts of penance and contrition. One of the first nobleman to ‘take the cross’ was Richard Plantagenet, Count of Poitou, followed within months by his father King Henry II of England, King Philip II of France, and the Holy Roman Emperor Frederick ‘Barbarossa.’ 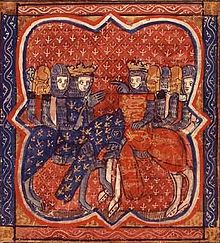 Due primarily to hostilities between the Plantagenets and Capets, the German crusade got underway first, in May 1189. It was composed of an estimated 12,000 foot and 3,000 knights, most of whom travelled with the Emperor overland, although smaller contingents traveled independently by sea. Barbarossa’s army was highly disciplined and prepared to pay for provisions but encountered difficulties as soon as it crossed into Byzantine territory. However, the new Emperor, Isaac II Angelus, had signed an agreement with Saladin including a promise to obstruct the passage of crusaders headed for the Holy Land. As a result, Barbarossa’s force found no markets for provisioning and met with repeated harassment from ‘bandits’ and ‘brigands,’ probably in the pay of Constantinople. Barbarossa brushed aside the ineffective attempts to stop him, forced Isaac to provide transportation across the Dardanelles, and crossed into Muslim controlled territory on 22 April 1190.

On 18 May Barbarossa decisively defeated a Turkish army at the Battle of Iconium. The German crusaders then occupied Konya, the capital of the Seljuk Sultanate of Rum, where they replenished supplies and replaced significant equine casualties. The truce negotiated with the Turks allowed free passage through the rest of the sultanate. On 30 May, the army crossed back into Christian territory, entering Cilician Armenia, where it met with hospitality and support for the first time. One of the most important modern historians of the crusades, Christopher Tyreman, claims that Barbarossa’s performance to this point was ‘one of the most remarkable feats of western arms in crusading history.’[i]

Yet it was all undone by a single accident. On 10 June 1190, Frederick Barbarossa drowned while crossing the River Saleph. It is unclear if he had a heart attack while riding through the icy water, or if he was, as one account claimed, caught in a whirlpool. Whatever happened, his death triggered the almost complete disintegration of his host. Most of the crusaders turned back. Only a small contingent under his son Frederick of Swabia reached Antioch and eventually the siege at Acre, where many of the remainder died.

Meanwhile, with the death of Henry II on 6 July 1189, paved the way for an uneasy peace between France and England. Philip II was at best a reluctant crusader and did not yet have a well-organized and centralized bureaucracy comparable to that of the Plantagenets. Although he attempted to raise extra funding through a special tax, resistance was considerable. Philip proved unwilling or unable to enforce collection, and ultimately raised only a modest host. However, a number of his powerful barons (e.g. the Duke of Burgundy, the Counts of Flanders and recruited and paid for substantial contingents. In consequence, the French host probably equaled that of Barbarossa, e.g. 15,000 men.

Richard of Poitou, now King of England, on the other hand was totally dedicated to the crusade. Contemporaries claim that crusading fever swept England fueled by what is described as love of God, hope for remission of sins — and respect for the king. The latter should not be underestimated. Richard also proved remarkably inventive in raising funds to finance his great expedition. In addition to the ‘Saladin Tax’ — which he vigorously collected, he engaged in practices which are nowadays considered offensive, such as selling offices. In the twelfth century, however, royal offices were always instruments of patronage, and payment for them in one form or another was expected not exceptional. More scandalous in the eyes of his contemporaries was the sale of properties from the royal domain because it diminished royal revenue in the long term. Yet Richard successfully increased exchequer receipts for the year 1190 by two to three times the norm.

Richard’s focus on being well-financed and his organizational talent for raising funds served his soldiers well. For a start, it enabled Richard to build a fleet to transport his army by sea, avoiding the grueling two-thousand-mile march that had depleted crusading armies in the past. Furthermore, this fleet was key to maintaining lines of supply throughout the entire crusade and enabled two decisive amphibious operations.

After wintering in Sicily, the French (also travelling by sea but in chartered vessels) sailed on 30 March 1191 for Acre, arriving without incident April 20. Richard’s fleet of 209 ships sailed ten days later and immediately ran into violent storms that scattered it. Richard diverted to Cyprus, which he captured from a self-proclaimed and unpopular despot, before proceeding to Acre, which he reached 8 June.

The arrival of the French and English forces decisively tipped the balance of forces in favor of the besiegers. While French and English fleets blockaded Acre by sea, the kings deployed large siege engines against the city. The crusaders were at last numerous enough to hold off Saladin’s forces while engaging in assaults on the city. The Saracen garrison rapidly recognized that surrender might be unavoidable and opened negotiations. The initial crusader demands for the return of all prisoners and all coastal cities were unrealistic and rejected. However, eventually, the Franks were talked down to the terms agreed upon on 12 July 1191, namely 1) the restoration of the True Cross, 2) the release of 2,700 prisoners and 3) payment of 200,000 dinars. The garrison also provided 2,700 hostages (fighting men, not women and children) to stand surety for the fulfillment of the terms.[ii]  Significantly, the deal was made with the garrison at Acre, not Saladin. When the Sultan learned of them, he was allegedly ‘distressed’ but felt honor-bound to uphold them.

At this point, Philip II concluded he had fulfilled his crusading vows and promptly sailed back to France — to the shock and scorn of the entire crusading host, including his own subjects. French command passed to the Duke of Burgundy — the same man who had been betrothed to Sibylla of Jerusalem in 1179/1180 but reneged on his promise. Meanwhile, Saladin failed to deliver, twice. Richard made the strategic decision to execute all the hostages in plain view of Saladin’s army. Although by the standards of the day, Richard had the right to do what he did, his action still shocked contemporaries and has blackened his name ever since. Historians have pointed out that Richard could ill afford to leave sufficient troops in Acre to guard nearly 3,000 prisoners. Others note that he needed to signal strength and determination to Saladin. Often overlooked, the Lyon Continuation of Tyre reports that the principle reason the Franks had agreed to the surrender terms in the first place had been because ‘they were keen for the Christians to be released from Saracen captivity.’[iii] As a result, when Saladin failed to deliver either the cross or the prisoners, the common troops were outraged and rebellious. Namely, ‘when King Richard saw the people weeping and lamenting because Saladin had deceived them, he had great pity and wanted to calm those who were in such great distress.’[iv] Read: he feared his own authority could be undermined and he might lose control of his army. Tragically, it was prisoners on both sides that paid the price. Saladin retaliated by slaughtering those prisoners who fell into his hands in the days following this massacre.

[ii] The exact number of hostages and prisoners to be released is not certain as different accounts given different numbers. This number is the figure deemed most reasonable based on conditions in Acre and the size of the respective forces.

[iii] Anonymous, The Old French Continuation of William of Tyre translated by Peter Edbury as ‘The Conquest of Jerusalem and the Third Crusade’ (Crusades Texts in Translation) [Aldershot: Ashgate, 1998] chapter 105, 107.

Order now!
Dr. Helena P. Schrader is also the author of six books set in the Holy Land in the Era of the Crusades. The Third Crusade is described from the perspective of the Franks in Outremer (rather than the crusaders) Envoy of Jerusalem.