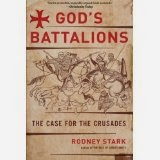 This well-researched book with its profuse bibliography and copious notes is not a history of the crusades. Nor is it, as some reviewers suggest, an apology for the crusades. Rather this is an extended essay which refutes a number of common myths or outdated theories about the crusades and the crusader states. Stark is not a polemicist, but a professor at Baylor University, who has published extensively on religion and sociology.  In short, he is a scholar intent on paring away legend and prejudice to enable academic and popular discourse shaped by fact not fiction. Any serious scholar of the crusades and the crusader states should start with this book — and then get on with their actual research unencumbered with false notions.  Even more important, this ought to be required reading in all classes that touch on the topic of the crusades.

Stark systematically dissects and destroys the following notions about the crusades that still dominate public perceptions and debate.
Stark starts by cataloguing the long list of Muslim conquests against Christian states and peoples from Syria and North Africa to Armenia, Spain and Southern France, but he also provides a chilling list of mass murders of Christian monks and pilgrims — each with dates and numbers: 70 Christian pilgrims executed in Caesura for refusing to convert to Islam and 60 crucified in Jerusalem in the early eighth century, the sack and slaughter of the monastery near Bethlehem in the later eighth century, the destruction of two nearby churches gradually escalating to multiple attacks on churches, convents and monasteries in and around Jerusalem including mass rapes in 808 and 813, a new wave of atrocities in 923, the destruction of an estimated 30,000 (yes, thirty-thousand) Christian churches including the Church of the Holy Sepulcher in 1009. So much for Muslim “tolerance.”


Stark also brings considerable evidence that the alleged “superiority” of Muslim/Arab culture was largely based on accomplishments of Persian, Jewish, Indian and, indeed, Christian scholars living under Muslim rule.  Thus the alleged mathematical superiority of the Arabs came from the Hindus, the great libraries and legacy of learning came from the Greeks, Arab medicine was, Stark argues, “Nestorian Christian” in origin and so on. He then contends that the Christian west was anything but “backward” and the so-called “Dark Ages” is a misnomer that says more about the ignorance of historians than the state of civilization in the period between the fall of Rome and the First Crusade.  Stark points out that the military technology of the crusaders — from stirrups, horseshoes and crossbows to the devastatingly effective “Greek Fire” — was markedly superior to the military technology of their opponents. But it wasn’t just in military matters that the crusaders were ahead of the Saracens. In the fields of agriculture, land-transportation and nautical technology, Western technology also significantly out-stripped that of the Middle East.

Stark is perhaps at his best in documenting the many times that Muslim victors slaughtered the garrisons and inhabitants of conquered cities — long before the first crusaders even set out from Europe. He points out the hyperbole in popular accounts of the fall of Jerusalem in the First Crusade as well. But he is most effective in countering the myth of Muslim chivalry is his account of the fall of the Kingdom of Jerusalem in the second half of the 13th Century, where time and again the Mamluk leaders broke their word and enslaved or massacred those to whom they had promised freedom and life. One quote from a primary, Muslim source about the sack of the great Roman city of Antioch should suffice to make this point. The source is a letter to the Prince of Antioch (who had not be present in his city to defend it) by none other than the Muslim Sultan himself. Sultan Baibars gloated: “You would have seen your Muslim enemy trampling on the place where you celebrate Mass, cutting the throats of monks, priests and deacons upon the altars, bringing sudden death to the Patriarchs and slavery to the royal princes. You would have seen fire running through your palaces, your dead burned in this world before going down to the fires of the next.” Ah, yes, Saracen “chivalry” at its best indeed. 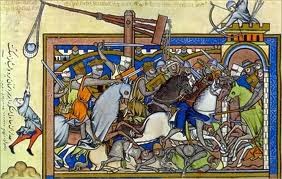 The book does have its weaknesses, of course. Stark is covering far too great a canvas to provide any analysis or detail.  His book is structured as a rebuttal to unfounded allegations and theses, but for the most part he does not provide alternative theses.  Certainly, he does not describe personalities and their impact on events except in some rare instances. His explanations of developments are often facile, and occasionally he falls into outright errors. (For example, he claims plate armor was so heavy a knight needed a crane to mount his horse; in reality it was much lighter than chainmail and a knight in his prime could vault onto his horse without use of a stirrup much less a crane.) But the bottom line is that this book does what it sets out to do: it destroys a whole series of insidious myths that turn the crusades into an excuse for all subsequent barbarity; it clears the way for a more productive debate based on fact rather than falsehood.

My biographical novel of Balian d'Ibelin in three parts is set in the Kingdom of Jerusalem in the last quarter of the 12th Century.

A Biographical Novel of Balian d'Ibelin
Book I: Knight of Jerusalem was released in September 2014.