The Victor of Montgisard - The Leper King

Last week, I described the dramatic Christian victory at Montgisard. I'd now like to take a closer look at the the life and reign of the man who won the battle: Baldwin IV of Jerusalem. 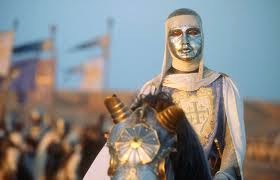 Baldwin was born in 1161, the second child of Amalric of Jerusalem and Amalric's first wife, Agnes de Courtney. At the time of his birth, his father was the younger brother and heir apparent to the childless King Baldwin III of Jerusalem.

Just two years latter, Baldwin III died and Amalric ascended the throne -- but only on the condition that he set aside Agnes de Courtney. Agnes was duly disposed of, but Amalric's children of his marriage, two-year-old Baldwin and his year-older sister Sibylla, were explicitly recognized as legitimate. They remained at court with their father. In 1167, Amalric remarried, this time to the Byzantine Princess Maria Comnena.


At about this same time, Baldwin was diagnosed with leprosy by his tutor William, later Archbishop of Tyre. According to Tyre, the leprosy first manifested itself as a lack of feeling in Baldwin’s right hand. However, initially, Baldwin retained the use of his other limbs and did not suffer from noticable disfigurement. His illness was kept quiet.

In 1174, Baldwin's father died unexpectedly of dysentery on his way back from a campaign against Nur ad-Din, the Sultan of Damascus. Baldwin was elected King by the High Court of Jerusalem despite the fact that other crown vassals afflicted with leprosy were required to join the Knights of St. Lazarus.  Being still a minor (13) at the time of his father's death, the Kingdom was placed in the care of a regent, Raymond of Tripoli, himself a descendent of Baldwin II and one of the most powerful barons in the crusader states. Notably, at this time Baldwin could still move and above all ride without apparent impediment.

In the summer of 1176, Baldwin turned 15 and so attained his majority. He took the reins of government for himself and signalled this by calling his mother back to court and placing his maternal uncle, Joscelyn of Edessa, into the powerful position of Seneschal of Jerusalem. Tripoi appears to have been sidelined, but not in anyway humiliated. 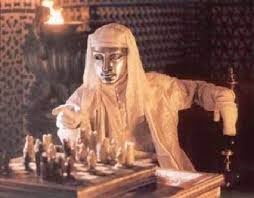 Baldwin IV in "Kingdom of Jerusalem"

Given his illness, however, and the certainty that he would not sire a successor, the most pressing business of the Kingdom was the marriage of Baldwin's heir, his older sister Sibylla.  In fact, Tripoli had already arranged a marriage for her with William de Montferrat, a man from a powerful north Italian family. Unfortunately, William died in the summer of 1177, leaving Sibylla pregnant at 17.

Meanwhile, the enemies of the Kingdom of Jerusalem were getting stronger. The Kurdish general Salah-ad-Din had first murdered the Vizier in Cairo and then, on the death of the Fatimid Caliph, declared Egypt Sunni. The death of the Sultan of Damascus in 1174 opened the way for Salah-ad-Din to seize control of Damascus as well, with Nur-ad-Din's legal heir fleeing to Aleppo. Although Salah-ad-Din would need almost ten more years to consolidate his position and eliminate all his rivals, he had effectively united Shiia Egypt and Sunni Syria under his rule by 1177 -- and to bolster his own legitimacy he declared jihad against the Christian states in the Holy Land.

Baldwin IV sought to counter the rise of Salah-ad-Din by following his father's policy of alliance with the Byzantine Empire and attacking Cairo. He hoped to capitalize on disaffection among Salah-ad-Din's Shiia, Arab subjects and their resentment of a Kurdish, Sunni usurper. Unfortunately, the Count of Flanders, who had arrived from the West with a large contingent of knights, thought he should be made King of Egypt if he helped conquer it, and the coalition fell apart. The Byzantine fleet withdrew and Flanders went off to campaign against Syria, taking many of the barons and knights of Jerusalem with him.

Salah-ad-Din had assembled his forces to meet the expected invasion and recognized that the Kingdom of Jerusalem was practically defenseless before him. He invaded, sacking and plundering as he advanced north, leaving well defended positions like the Templar castle at Gaza untouched until he came to Ascalon. Ascalon had been in Egyptian hands until 1153 and was considered a key strategic position for the defense of Egypt -- or the attack on Jerusalem. Saladin prepared to besiege the city.

As described in my previous entry, in a dramatic move Baldwin IV rode to the rescue of Ascalon with just 367 knight, reaching the city shortly before the Sultan's army enveloped it. But now Baldwin was trapped inside and Jerusalem was practically defenseless, so Salah-ad-Din decided to strike for the greatest prize of all: Jerusalem. Salah-ad-Din had such overwhelming superiority of force and so little respect for a leper youth of 16 that he allowed his troops to continue plundering along the way rather than concentrating on his goal.

He had miscalculated. Baldwin sallied out of Ascalon, called up the feudal levies and fell on Salah-ad-Din from the rear, winning a stunning and complete victory at Montgisard on November 25, 1177. (See my entry from that date.) 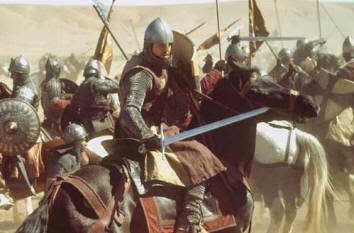 A modern depiction of the Battle of Montgisard (copyright Talento)

But the consequences for Baldwin personally were also devastating. Based on the historical descriptions of Baldwin’s initial illness, which state he had lost the feeling in his arm but that there were no other symptoms such as discoloration or ulcers, modern experts in the disease believe that Baldwin IV initially had primary polyneuritic tuberculoid leprosy, which deteriorated into lepromatous leprosy during puberty. There was, according to Piers D. Mitchell ("An Evaluation of the Leprosy of King Baldwin IV of Jerusalem in the Context of the Medieval World," in Bernard Hamilton's The Leper King and His Heirs, Cambridge University Press, 2000), nothing inevitable about this deterioration.  However, puberty itself can induce the deterioration as can untended wounds (that go unnoticed due to loss of feeling) which cause ulcers to break out.

When Baldwin led his daring campaign against Salah-ad-Din that led to the surprise victory at Montgisard he was in puberty, just 16 years old. It is probable that it was in part because of this campaign — which required camping out in the field and going without the usual bathing of his feet and hands — that caused Baldwin's leprosy to take a turn for the worse. According to Mitchell, children who develop lepromatous leprosy are likely to die prematurely, and so once Baldwin’s leprosy had become lepromatous it inevitably took its course through the gruesome stages of increasing incapacitation to a an early death.

But Baldwin wasn't dead yet. In 1180, he allowed his sister Sibylla to marry a young adventurer from the West, Guy de Lusignan. According to one contemporary chronicler, Sibylla was seduced by Guy (and she would not have been the first princess in Outremer to be seduced by a young adventurer!), and Baldwin first threatened to hang Guy for "debauching" an princess, but then gave in to his sister and mother's pleadings to let his sister marry "the man she loved." Other sources suggest that Baldwin feared the Count of Tripoli was planning to depose him by arranging a marriage between Sibylla and Baldwin d'Ibelin, the Baron of Ramla and Mirabel. Whatever the reason, with Sibylla's marriage to Guy the succession appeared secure again. 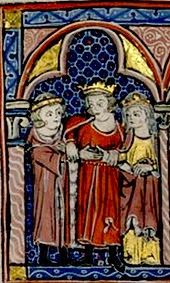 The succession might have been secure, but the Kingdom was not. Salah-ad-Din had invaded a second time in 1179 and Baldwin had been unhorsed in the engagement, an indication of his deteriorating condition. When Salah-ad-Din invaded a third time in 1182, Baldwin could no longer ride and commanded his army from a litter -- but still fought the Saracens to a stand-still, forcing them to withdraw. The following year, however, he was seized with fever and believing he was on his death-bed made his brother-in-law Guy de Lusignan regent. Thus when Salah-ad-Din invaded a fourth time in 1183, it was Guy de Lusignan who led the Christian armies to face him.

The results were not good. While the Saracens eventually withdrew, they had managed to do considerable damage and the barons of Jerusalem returned in a rebellious mood. The news that the key castle of Kerak was under siege (with both Princess of Jerusalem, the Queen Mother and the Dowager Queen all trapped inside for a wedding) should have triggered the immediate dispatch of a major relief force. Instead, the High Court (allegedly unanimously) refused to follow Guy de Lusignan anywhere. He was dismissed as regent, and Baldwin IV had to drag is disintegrating body halfway across the kingdom at the head of his army. The mere approach of the Leper King, however, was enough to convince Salah-ad-Din to withdraw. 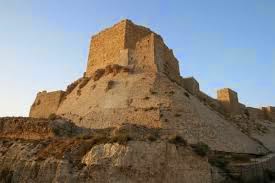 The Castle of Kerak, now in Jordan

By now Baldwin IV knew he did not have much time left to him. He had his nephew, Sibylla's son by her first husband William de Montferrat crowned as a co-monarch, and asked his bishops to find a way to dissolve Sibylla's marriage to Guy in the hope that another husband, more congenial to his barons, could be found for her. In the latter he failed, and hence when he died just short of his 24th birthday in the spring of 1185, he was succeeded by his nephew Baldwin V, and -- at the latter's death a year latter -- by Guy de Lusignan.

Baldwin IV ruled for less than ten years and throughout his reign he was handicapped by a progressively debilitating and disfiguring disease. Yet he retained the loyalty of his subjects to the very end and on no less than five occasions prevented Salah-ad-Din's vastly superior forces from over-running his fragile kingdom. For that he should be revered and respected.

Baldwin IV plays a major role in the first two volumes of my three part biography of Balian d'Ibelin: