The Medieval Housewife -- A Review 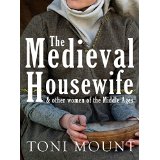 This is a gold-mine of anecdotal evidence demonstrating conclusively that medieval women were far more “empowered,” active and effective than conventional stereotypes allow. As Ms. Mount states in her introduction, “historians have tended to look at what women could not do.” Such a perspective is not only inherently negative (the glass is half empty rather than half full), it effectively denigrates women to objects of male power. As Mount so eloquently argues, women are — and have always been — independent personalities capable of coping with “tricky circumstances.” To focus exclusively on legal norms and male literature describing female “ideals,” denies women their own voice. This book is a refreshing change from polemical tirades against male domination that lets medieval women speak for themselves — through the books they wrote (yes, even middle class women in the Middle Ages were literate!), their wills, and their actions.

The book is organized by theme, looking at women in their homes (housewives), in trade, in rural communities (peasants), in the church and in the upper class. Mount uses exclusively primary sources and archaeological evidence to build her case, and provides many photos from medieval sources and re-enactments. The book is short and easy to read, yet meticulously documented with a good bibliography of recommended further reading.

As a historian, I already knew a great deal about the wealth, power, influence and substantial legal rights of royal and aristocratic women (you can’t read history without running into these women — Empress Mathilda, Eleanor of Aquitaine, Melisende of Jerusalem, Isabella of France, Joan of Kent, Marguerite d’Anjou etc.).  I also knew about the legal rights of widows even in the middle and peasant class, their ability to inherit, run their husband’s businesses and hold their husband’s vacant seats in guilds etc. What completely surprised me was learning that girls were also frequently apprenticed at young ages to learn trades, many of which they continued to practice after marriage. The ability of women to run their own business while still wives, not just as widows, was news to me as well. Mount’s evidence — and it is hard, solid evidence — completely transforms my view of women’s role in the lower tiers of medieval society and is so doing rounds out the picture I already had. It makes much more sense that women, regardless of class, had a comparable relationship with the men of their respective class. After all, women at the lower end of the social scale looked to the women of the elites not only for fashion but also as role models. A powerful queen would embolden the ladies of her court, who in turn inspired the women serving them etc. etc.

My only disappointment with this book is that it remains a collection of anecdotes rather than a more systematic analysis of women in the Middle Ages. Rather than just dismissing previous historians for their “half-empty” approach, Mount could have tackled some of the more destructive theses about women in the Middle Ages head on. She almost does this in her chapter on women in the church in which she quotes some extraordinarily positive views of women recorded by leading churchmen that refute the oft-stated notion that “the Church” was hostile to women. It wasn’t that simple. But ultimately Mount shies away from taking a firm position and putting forward her own comprehensive thesis on women’s place in Medieval Society. A pity — unless that will be the subject of a later book.

Women play anything but a passive role in my novel, "Knight of Jerusalem."

Book I: Knight of Jerusalem was released in September 2014.


Read more about women in the crusader kingdoms at Balian d'Ibelin and the Kingdom of Jerusalem.

See the world through the eyes of a crusader's horse! Follow "The Destrier's Tale" on: http://schradershistoricalfiction.blogspot.com