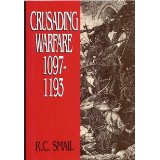 Although first published sixty years ago, this is still a valuable book for those interested in the crusades and the crusader states. It is logically organized looking first at the strategic framework, the composition of the armies of both Christians and Muslims, then finally at the tactics employed.  By avoiding a chronological narrative, Smail highlights how certain features of warfare remained the same — or changed — over time.

The book provides adequate footnotes for scholars, but the text itself does not often become bogged down in arguments with fellow scholars about details of little interest to the general reader. The book also provides some useful sketches and photos of some of the crusader castles. While the reader may not agree with all of Smail’s theses (more recent research casts doubt on his assumptions about the hostility of the native population, for example), his arguments are cogent and stimulate further thought an analysis.
Posted by Helena P. Schrader at 12:30 AM