Childhood of a Disastrous Queen: Sibylla of Jerusalem - Part I

Sibylla of Jerusalem, Queen of Jerusalem from 1186 – 1190, was a tragic figure. The antithesis of a power-hungry woman, she put her affection for her second husband above the well-being of her kingdom — and in so being doomed her kingdom to humiliation, defeat and almost complete annihilation. But how much of her behavior was the result of insecurity that stemmed from the experiences of her childhood and youth?

Sibylla was born in 1160, the daughter of Amalric of Jerusalem, the younger brother of King Baldwin III, and his wife Agnes de Courtenay, the daughter of the Count of Edessa. At the time of her birth, her father was Count of Jaffa and Ascalon, while her mother was landless, since the entire County of Edessa had been lost to the Saracens. Shortly after her birth, however, in 1163, King Baldwin III died without issue, and the High Court of Jerusalem agreed to recognize Amalric as his heir — on the condition that he set aside Agnes de Courtenay.

The official grounds for the annulment were that Amalric and Agnes were related within the prohibited degrees of kinship, something the church had suddenly discovered after six years of marriage. Obviously, the real reasons lay elsewhere, but it is not possible to know from this distance in time if it was Agnes' alleged immorality (as the Chronicle of Ernoul imputes) or fear that the Courtenays would try to muscle into positions of power in Jerusalem (as Malcolm Barber suggests in The Crusader States) or some other consideration now lost to the historical record that were the determining factors. For Sibylla the implications, however, were severe. Her mother Agnes was banished from court, while she and her younger brother Baldwin remained under their father’s control.

While Baldwin remained at court to be raised in close proximity to his father and learn his future role as King of Jerusalem, Sibylla was sent to the convent at Bethany near Jerusalem to be raised by her father’s aunt, the youngest daughter of King Baldwin II, the Abbess Yveta. From that point onwards, although she may have seen her father or brother on special occasions, she would have seen almost nothing of her mother, who promptly re-married.

By 1170 it was apparent that her brother Baldwin was suffering from leprosy. This meant that he might not live to adulthood and even if he did was unlikely to have heirs of his body. Finding a husband for the 10-year-old Sibylla was, therefore, of paramount importance to the kingdom. Friedrich, Archbishop of Tyre, was dispatched to the West to identify a husband for her, a man who would be suitable, when the time came, to rule the Kingdom of Jerusalem as her consort.

A year later, Friedrich of Tyre returned with Stephen of Sancerre of the House of Blois. Stephen was clearly of sufficient rank; his sister was married to Louis VII of France and his brothers were married to Eleanor of Aquitaine’s daughters by Louis VII. But Stephen unexpectedly refused to marry Sibylla and returned to France, squandering his chance to be King of Jerusalem. It is hard to imagine that anything about a young girl living in a convent could have offended an ambitious noblemen, and it is probable that his decision had nothing to do with Sibylla at all. Very likely he discovered he disliked the climate, the food, the role of the High Court of Jerusalem, or simply the military situation as Saladin was increasing in power. Then again, given Sibylla’s obvious lack of intelligence as demonstrated by her subsequent actions, maybe Stephen of Sancerre really was disgusted with her. Whatever his motives, Sibylla was probably deeply hurt by the public rejection.

In 1174, Sibylla’s father died unexpectedly and her younger brother ascended the throne as Baldwin IV. He was only 13 at the time and so placed under a regent, Raymond, Count of Tripoli, to whom fell the duty, in consultation with the High Court, of finding another man for Sibylla.  This time the choice of the High Court fell on William Marquis de Montferrat. William was first cousin to both Louis VII of France and the Holy Roman Emperor Friedrich, and his family had a long tradition of crusading.

William of Montferrat arrived in the Holy Land escorted by a Genoese fleet in October 1176, and within six weeks, he married the then 16-year old Sibylla. He was invested with the title of Count of Jaffa and Ascalon, the now traditional title for the heir apparent to the throne.  The contemporary chronicler and then Chancellor of the Kingdom of Jerusalem, William of Tyre, describes William of Montferrat as follows:

He was reasonably tall and was a good-looking young man with reddish-gold hair. He was brave, but quick-tempered and liable to over-react. He was very generous and completely frank, totally lacking in any kind of pretense. He ate to excess and was a very heavy drinker, but this did not impair his judgment.

There is no reason to think that Sibylla was ill-pleased with this choice of husband, or he with her. He certainly did not reject her and she became pregnant shortly after the marriage. Unfortunately, William de Montferrat became ill within six months and after eight, in June 1177, he was dead. Sibylla gave birth to a posthumous son in August and named him Baldwin after her brother. 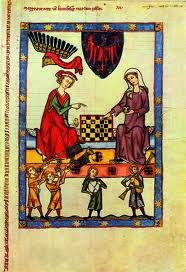 At once the search for a new husband for Sibylla commenced. The Count of Flanders arrived with a large force even before Sibylla gave birth to her son, and as a close kinsman (his mother was Baldwin and Sibylla’s aunt) he felt entitled to decide Sibylla’s next husband. The High Court of Jerusalem disagreed. Worse, the name he put forward was a comparatively obscure Flemish noblemen, who the High Court viewed as an insult to the crown of Jerusalem. Furthermore, he wanted to marry this man’s younger brother (of equally inferior status) to Sibylla’s half-sister, Isabella, thereby binding both princesses to his vassals — a crude means of making himself master of the kingdom without actually doing the hard work of fighting for it or ruling it. This was, understandably, unacceptable to the High Court of Jerusalem.  The Count of Flanders returned to Europe and Sibylla was still without a new husband.


According to the Chronicles of Ernoul, it was after Sibylla had been widowed, that the Baron of Ramla and Mirabel became interested in marrying Sibylla. While Ernoul is considered a biased and unreliable source, nevertheless, Ramla clearly had designs on Sibylla three years later and it is very possible that it was after Flander’s unsuitable suggestions had been rejected that he started to harbor hopes that the High Court would favor a powerful local baron over an unknown and unsuitable nobleman from the West.

Meanwhile, Baldwin IV took the step of associating his sister with him in some of his public acts as a means to reinforce her stature as his heir. (His great-grandfather, Baldwin II, had done the same toward the end of his reign to stress that his daughter Melisende would succeed him.) Baldwin IV also wrote to the King of France (perhaps convinced that the King of England — as represented by Philip of Flanders — did not have the best interests of his Kingdom at heart) and begged him (Louis VII) to choose from among his barons a man who could take up the burden of ruling the “Holy Kingdom” (i.e. the Kingdom of Jerusalem). Louis’ choice was Hugh, Duke of Burgundy, a very high-ranking nobleman indeed. He was expected to arrive in the spring of 1180.

Meanwhile, Baldwin of Ramla had been taken captive at the engagement on the Litani in the summer of 1179, and Saladin demanded the outrageous ransom of 200,000 bezants.  This was without doubt a “king’s ransom” — indeed higher in monetary terms than the ransom demanded for Baldwin II of Jerusalem when he had been taken captive by 1123, and more than twice the ransom paid for the Count of Tripoli in 1174. It was clearly beyond the resources of Ramla’s baronies to pay, and suggests that Saladin thought (had intelligence to suggest?) that Ramla was destined to Sibylla’s next husband and could command (in advance) the resources of the kingdom. Even more significant: the Byzantine Emperor paid a significant portion of Ramla’s ransom. Again, there is hardly any other plausible explanation of such generosity except that the Byzantine Emperor also believed Ramla was destined to become King of Jerusalem by marrying Sibylla.

It was a scenario that appeared more plausible than ever when, for a second time, Sibylla (and Jerusalem) was rejected after everything appeared to be settled. At least the Duke of Burgundy’s excuse was clear: the King of France had died leaving the kingdom to his young son Philip II and the Plantagenets were predatory. Burgundy felt he had to remain in France to defend it. The impact upon Sibylla's self-esteem, however, was probably profound. Indeed, it might explain her subsequent devotion to the man who married her next -- something I will explore next week.

Sibylla plays a major role in the award-winning Jerusalem Trilogy: