Review: "Myth of the Andalusian Paradise" by Dario Fernandez-Morera 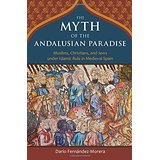 Fernandez-Morera systematically debunks the allegations of a more “relaxed” Islam and multicultural equality.  He does so by quoting Arab sources which (among other things) brag about the wholesale destruction of churches and the slaughter of Christian prisoners, praise the crucifixion of apostates, and texts advising Muslims how to collect the tax from non-believers. (Make them stand before Muslims sitting on a raised platform, call them “enemy of Allah” and then push them around for the amusement of any Muslim “who want[s] to enjoy it.”) He also documents the extent to which Islamic Spanish society was dependent on slaves. For example, Abd al-Rahman had 3,750 slaves in his court, 6,300 sexual slaves in his harem, and 13,750 slave soldiers. Furthermore, he notes that slaves were a major export of the kingdom, particularly eunuchs (castrated Christian males.) He documents the racism that characterized all blacks as fickle, foolish and ignorant and valued “white” slave girls at almost 15 times that of black slave girls.

Obviously, as Fernandez-Morera admits, the elites in Muslim Spain (as all over the world) often ignored the law. Non-Muslim slave singers and dancers were tolerated and even coveted. However, he is right to remind his readers that lapses in the application of law do not constitute a positive culture--much less a shining example of “paradise.”

In short, Fernandez-Morera uses the Arabic sources to enable us to picture Islamic Spain, and he applies logic and common sense ruthlessly to expose “political correctness” masquerading as history.  This book is important not just to those interested in learning about Medieval Spain, but as a lesson in how ideology can pervert allegedly scholarly writing. I recommend to everyone with an interest in history and historiography.


Dr. Helena P. Schrader holds a PhD in History.
She is the Chief Editor of the Real Crusades History Blog.
She is an award-winning novelist and author of numerous books both fiction and non-fiction. Her three-part biography of Balian d'Ibelin won a total of 14 literary accolades. Her most recent release is a novel about the founding of the crusader Kingdom of Cyprus. You can find out more at: http://crusaderkingdoms.com
Posted by Helena P. Schrader at 9:44 PM