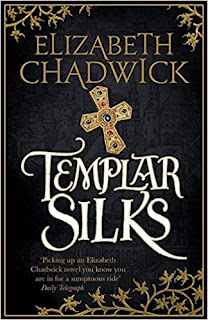 While some may object to me calling Chadwick a “biographer,” Chadwick’s books on William Marshal are an example of how a novelist dedicated to history and respectful of her subject can help readers understand historical characters better than any history book or non-fiction biography.  Yes, as novels, much is invented, but because nothing contradicts or distorts the historical record, these inventions serve to fill in blanks, explain actions, and help the reader see and understand her subject better.


Because we know nothing about what Marshal did in the Holy Land beyond the rough dates of his trip and the fact that he promised himself to the Templars during that sojourn, Chadwick had near complete freedom in imagining this short episode in Marshal’s life. She used it to good purpose to explain the things we do know about Marshal.  She does this masterfully by telling the story in retrospect, as Marshal prepares to take his Templar vows and die.


To best enjoy this book, the reader must understand this context. This is not a book about the Holy Land on the eve of Hattin. It does not attempt to depict, analyze or explain the personalities and events leading to the near total collapse of the Kingdom of Jerusalem. This is a book about how William Marshal’s pilgrimage to Jerusalem shaped the rest of his life.


Chadwick is at her best describing Marshal himself.  The opening scenes with Henry the Young King are very powerful as well, and his relationship his younger brother Ancel also convincing and compelling. The over-arching theme of sin, regret, and redemption is very well interwoven into the fabric of the novel and adds great authenticity to a book set in a period when men and women were genuinely pious.  Likewise, the Templars are realistically depicted as men of God, not cartoon musclemen, sinister secret-holders, or practitioners of the occult. I also liked the fact that Chadwick gave the Patriarch of Jerusalem contours and nuance, while Guy de Lusignan and Sibylla were shown as flawed but believable individuals. The occasional slip up (the arms of Jerusalem are gold on white, not gold on blue ― that is Hollywood invention) were insignificant beside an overall sense of authenticity.


Yet for all this, I can’t quite give this book full marks because I feel it fell short of what it could have been.  There were many repetitive scenes, always from the same perspective with the same content (passionate sex followed by a fight of some sort), which did not significantly move the narrative forward. It felt as if the author was marking time. Marshal spent roughly two years in the Holy Land and she couldn’t really imagine what he was doing all that time, so he does the same thing for chapter after chapter.  The other weakness of the book is that because Chadwick follows the popular fashion (rapidly becoming a dogma) of not changing points-of-view the reader never understands the female protagonist, Paschia. She remains a façade, or worse, a device for explaining Marshal. Because she was seen only from the outside and Marshal is himself unsure what she feels and things, it is impossible for the reader to connect with her and understand her. Although less essential to the overall impact of the novel, it would have been far more interesting and enlightening if the reader had been allowed inside Ancel’s head or Asmaria’s as well. In the end, seeing Marshal only through Marshal’s eyes is, in my opinion, a lost opportunity to bring him better to life by enabling others to share their views of him with us.

Marshall has a cameo role in award-winning Defender of Jerusalem. 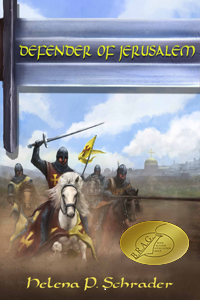 
Dr. Helena P. Schrader holds a PhD in History.
She is the Chief Editor of the Real Crusades History Blog.
She is an award-winning novelist and author of numerous books both fiction and non-fiction. Her three-part biography of Balian d'Ibelin won a total of 14 literary accolades. Her most recent release is a novel about the founding of the crusader Kingdom of Cyprus. You can find out more at: http://crusaderkingdoms.com
Posted by Helena P. Schrader at 6:11 AM