The Money Lenders in the Temple: The Banking Activities of the Knights Templar

In the end, it was not the strength of Islam or any Muslim power, but Templar wealth ― and the greed of a Christian king ― that brought down the mighty Order of the Knights Templar.  It is one of the many ironies of history that a religious order so poor at its inception that the very word “poor” was incorporated in its name (the Poor Knights of the Temple of Solomon at Jerusalem) should not only gain wealth but become famed for its financial services. Cynics looking at the record of the Knight Templar might even be justified in suggesting that the Templars were better bankers than fighters. Today I take a look at just what financial services the Knights Templar offered. 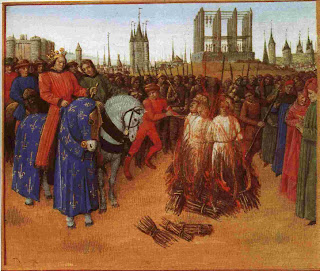 It all started quite humbly and, I believe, innocently. In an age where there was not yet paper money, much less online and mobile banking, liquid capital took the form of metal, primarily gold and silver, coins.  These coins were bulky, heavy and valuable to anyone, so very tempting to thieves. Anyone in the Middle Ages in possession of gold or silver coins was at pains to protect it in some way, either by hiding it or placing it in “treasuries” of some kind, with locks and metal bindings, preferably in a deep cellar or high tower, guarded by reliable thugs.

Life being what it is, however, not everyone had reliable thugs to protect their gold and silver. So it became the practice for people of a civil occupation (i.e. without large numbers of armed men at their disposal) to place their valuables in “safekeeping” with religious institutions because these were supposed to be immune from theft and robbery. Unfortunately, religious houses being by definition home to men who did not pursue the profession of arms yet known to be in possession considerable gold and silver, became particularly attractive targets for sack and pillage by heathen, irreligious or merely desperate armed men. (e.g. Viking raids on monasteries and churches, and the sack of the like by desperate mercenaries and kings.) 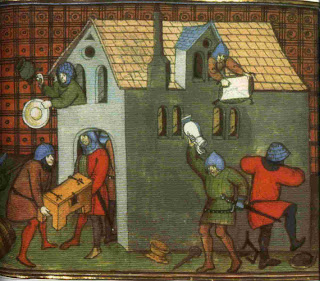 The establishment of the Knights Templar, however, provided a perfect solution to the problem of keeping large sums of gold and silver safe.  Here was a religious institution with its own highly-trained and fierce fighters. Within a very short space of time, Templar houses from Ireland and Iberia to Jerusalem had become the preferred place to deposit liquid capital assets (gold, silver, and jewels) for safe keeping.  The Templars dutifully assumed responsibility for the safe-keeping of these valuables, without ― it should be well noted ― charging interest for such services or using the money for their own purposes. As Helen Nicholson writes (The Knights Templar: A New History. Sutton Publishing, 2001, p. 163): “Money deposited with [the Templars] was not pooled and reinvested, but remained in its owners’ strongboxes within the Order’s treasury, and could not be accessed without the owners’ permission.”

The Templars, it should be noted, took this duty to protect money deposited with them very seriously. The most famous example of their diligence in this regard occurred during the Seventh Crusade when King Louis IX of France was taken captive along with the bulk of his nobles and knights.  A ransom was at length negotiated (characteristically for a man who would be a saint, King Louis bore the full financial burden for the men captured with him), but when the royal treasury was counted the French found to their dismay that it was short some thirty thousand livres. The Seneschal of France, Jean de Joinville, realizing that the Templars must have that much money aboard their flagship, promptly requested that the Knights Templar advance the sum to the King of France, so he and his leading nobles could escape captivity. The Templars refused because it was not Templar money and they had sworn not to release it to anyone without the owner’s permission. The threat of force by Joinville persuaded the Templars to bend the rules a little, but less dire circumstances would have made a threat of force against the Templars nearly unthinkable and their surrender even less so. 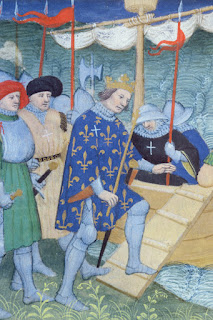 From accepting deposits to transporting those deposits was only a short and logical step.  The Knights Templar rapidly built up a network of houses and commanderies stretching from the Atlantic Ocean to the River Jordan. They were constantly sending armed men from one place to another and their raison d’être was the protection of pilgrims.  So what could have been more natural than that they would take on the job of transporting money from place to place ― a sort of medieval Brinks armored service?

But, then again, why risk and expend resources carrying heavy coins around, when a letter would do the same thing? So the “letter of credit” was invented. Now people could deposit money at the nearest Templar establishment, and withdraw the same amount of money (adjusted, of course, for currency conversion) in a different town, province or kingdom! This was truly a brilliant innovation, but only made possible by the fact that so much money was being deposited all across Christendom and the Temple itself was earning so much money from its own properties and business that they were now (by the late 12th century) truly in possession of sufficient cash in any major house to meet demand.

Not that Templar resources weren’t occasionally strained. When King Louis VII of France (the great-grandfather of Louis IX) washed up in the Holy Land having lost the bulk of his army and all of his treasury in a disastrous overland crusade, the Knights Templar loaned him so much cash to cover his expenses during the remainder of his time in the Holy Land that it “brought the Order close to financial ruin.” (Barber, Malcolm. The New Knighthood: A History of the Order of the Temple. Cambridge University Press, 1994, p. 271.) 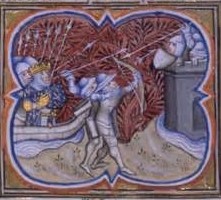 But by then, the Templars and the French crown already had a symbiotic relationship that lasted roughly 100 years ― until Philip IV decided to bite the hand that fed him and unscrupulously attacked, tortured and destroyed his former friends.  During the preceding hundred years, however, the Temple in Paris served as the treasury of France. Period. The royal treasurers were all senior officials of the Temple, and the French treasury was housed in the Paris Temple.

Although in no other kingdom was the relationship quite so close, many other monarchs likewise appointed Templars to serve as their financial managers. In England, a Brother Geoffrey of the Knights Templar was appointed by Henry III to manage all his personal expenditure. The Kings of Scotland, Ireland, and Aragon and many popes did the same at various times.

Yet while the Templars were frequently found in the role of “almoner” ― i.e. the person who dispenses royal largess ― they were also often entrusted with collecting money as well.  Thus the Templars were made responsible for raising the “Saladin Tax” levied on every household in England to support the war in the Holy Land. The Popes also entrusted them will collecting exceptional tithes, usually those in association with the defense of the Holy Land in some way.  Yet there are also instances when the Templars were simply employed as reliable agents, men who had a reputation for scrupulous honesty combined with effective military might, to collect purely secular dues, such as customs duties in Ireland. 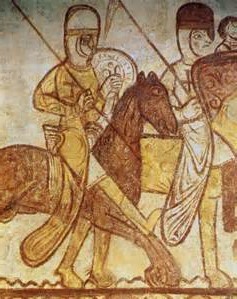 When they weren’t directly involved in collecting or distributing funds for royal or papal authorities, their, by now formidable, reputation as sophisticated accountants earned them the task of auditing the accounts of others. In short, if a monarch, lord or bishop had any reason to doubt the accounts his own servants put before him, he could turn to the Knights Templar and ask them to audit said accounts.

Although the evidence left to us is fragmentary, it is sufficient to confirm that the Templars were indeed by the mid-thirteenth century very sophisticated accountants. They had to be sophisticated accountants to keep track of all the money they managed from so many different sources. Debts and credits were carefully noted in parallel accounts with sources and destinations meticulously noted. Receipts and books were signed by individual cashiers ensuring accountability. Templar money could not ― and did ― simply disappear or get lost.

But at some point along the way, doing all those services for others turned into a business and a function in its own right. From rescuing crusading kings in financial distress (1150) to offering loans to merchants for purely commercial purposes (1300) was not so great a step, perhaps, but it was a significant one nevertheless. The once incorruptible “poor knights” of the early 12th century, had become the “money-lenders in the Temple.” From providing the poor with protection (for their goods as well as their person) they had become tax-collectors for kings and “money-grubbing” financiers. That loss of innocence and reputation, along with the loss of their justification for being ― the Holy Land ― undoubtedly contributed to their downfall.

The Knights Templar and Louis IX of France feature in: 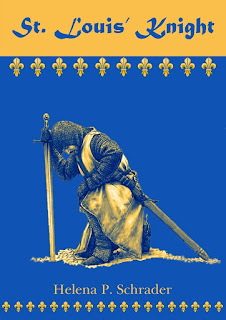