The Dar al-Islam on the Eve of the Crusades

To understand the dynamics, opportunities and risks that confronted the crusaders when they ventured into the Holy Land in 1099, an appreciation of the Islamic world the crusaders confronted is essential. This world, however, was not stagnant, but rather had evolved through history.  Below is a quick sketch of key events and factors shaping the Dar al-Islam in 450 years prior to the First Crusade. 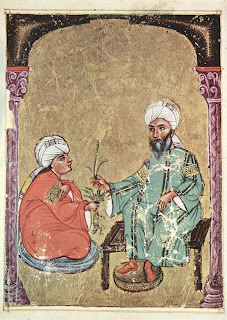 By the time the first crusaders arrived in the Middle East to re-take Jerusalem and re-establish Christian rule over the territories known in the West as "the Holy Land," Arab domination of the Levant had lasted roughly 450 years. More important, driven by religious fervor, the Arabs had conquered North Africa, most of the Iberian peninsula, the islands of the Mediterranean, and had spread Islam to the Caucuses and Persia as well. (For a timeline of Muslim conquests see: Jerusalem Forgotten?)

Alongside these military victories, Arab elites adopted and spread a new Islamic culture. This culture awakened a surge of creativity and produced great works of art, literature, mathematics, astronomy and medicine. In urban centers such as Baghdad, Cairo and Damascus there were centers of learning and education, as well as great hospitals, including teaching hospitals where medical practitioners were trained. Great mosques, palaces, fortresses and markets were built. Indeed, the 9th and 10th centuries are often viewed as a "golden age" of Islamic culture.

In the 11th and 12th centuries, however, a number of factors began to undermine and shatter that Arab dominance and with it the confidence that had fostered the flourishing of intellectual and artistic achievements. Indeed, the diversity of peoples now united in the Dar al-Islam make the crusader term "Saracen" (which literally just means "easterner") a justifiable description of their foes. Historians noted that the crusaders, in spite of their various origins, were more homogeneous than their opponents, who were deeply divided racially, linguistically, and culturally. In addition to the Arabs, there were now Turks, Persians, Berbers, and Kurds living in the "abode of Islam" (the literal translation of Dar al-Islam).

Arguably even more disruptive to Islamic society of the twelfth century was the dangerous strength of two Shia states in the heart of the Middle East. The largest and most successful was the Fatimid Caliphate, established in Cairo in 969, which had rapidly spread its influence across North Africa and the Levant. The Turks, recent converts to Islam, pushed the Fatimids back into Africa -- but at the price of seizing political control of the Caliphate of Baghdad. Thereafter and for the next two hundred years, the Caliphs of Baghdad were virtual prisoners of their protectors. 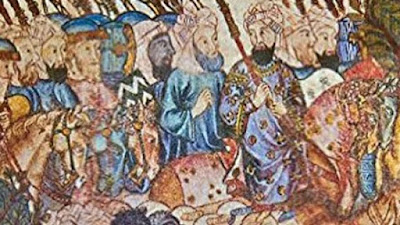 Meanwhile, a smaller and more fanatical Shia sect established itself in the mountains of what is now Lebanon: the Assassins. Sunni Muslim leaders felt actively threatened by both of these Shia states, and wars against the Shia generally commanded more popular support than wars against the Christians, the former being heretics, the later simply misguided.

Yet, this was not the only threat or conflict of the period. Historian Nabih Amin Faris summarizes the situation like this:

The twelfth century witnessed struggles between Moslems and Franks, between Sunnites and Shiites, between Sunnite caliph and Sunnite sultan, between Sunnite princes in the various urban centers and those in the outlying districts, between ambitious dynasts and predatory viziers, and between the mass of the population, mostly Arabs, and the foreign elements, mostly Turks. Each of these struggles was sufficient to disrupt the normal course of life and to ravage the general good of society. Together, they wrought havoc throughout the empire, rendered communications unsafe, increased lawlessness and gave rise to various forms of brigandage. [1]

Indeed, Faris notes further that, when in AD 1111 the sultan of Baghdad at last answered the pleas for assistance from the Moslem states facing Frankish incursions, "his troops, in the words of a Moslem chronicler, 'spread havoc and destruction throughout the land, far exceeding anything which the Franks were wont to do.'"

The constant conflicts shattered the economy and disrupted trade. Trade with the Far East stagnated and declined at the same time that the Mediterranean came increasingly under Christian domination. Not surprisingly, declining security and prosperity had an impact on intellectual and artistic development. It was a period of preservation, copying and compiling rather than creative innovation. Particularly damaging to intellectual pursuits was the fact that the rise of strong Shia states made Sunnis alarmed about “heresy.” Just as the fear of “heresy” in Christianity led to the introduction of the Inquisition, the fear of heresy in Islam likewise led to a more rigid orthodoxy among the majority Sunnis. The space for theological discourse and discussion narrowed significantly. Furthermore, because the Muslim states were theocracies, they conflated heresy and treason.

The trends toward greater orthodoxy and intellectual stagnation which affected the elites, arguably had an even more profound impact on the most vulnerable segments of society. According to Faris (p. 16), "...Arab women had lost the greater part of their freedom and dignity. ....[and] the system of total segregation of the sexes and stringent seclusion of women had become general" even before the 12th century, but it was in the 12th century that non-Muslim communities became subjected to increased discrimination.

Non-Muslims were expelled from government employment, including employment in hospitals, and forced to wear distinctive clothing. It is important to remember that non-Muslims may still have represented a majority of the population or at a minimum a very large minority in those parts of the Middle East that had been part of the Byzantine Empire before the Muslim invasions of the 7th century.

Added to all these man-made difficulties, the 12th century also saw repeated epidemics of small-pox, plague and malaria, as well as earthquakes and famines.

Visitors from Muslim Spain reported that the Muslim subjects of the crusader kings were on the whole better off than their brothers in the Muslim states around them. Food for thought.

[1] Faris, Nabih Amin. "Arab Culture in the Twelfth Century" in Zacour, Norman P. and Harry W. Hazard. A History of the Crusades Volume Five: The Impact of the Crusades on the Near East. University of Wisconsin Press, 1985, 4.