On July 4, 1187 the Sultan Saladin destroyed a Christian army in what has gone down in history at the Battle of Hattin. The victory was so complete that it led almost immediately to the loss of nearly the entire kingdom of Jerusalem. Yet there was nothing inevitable about that defeat. Below is a summary of the campaign. 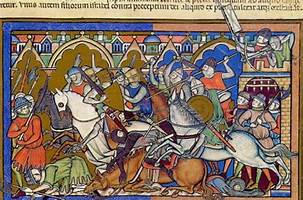 On 27 June 1187 Saladin’s army crossed the Jordan. For his sixth incursion into the Kingdom of Jerusalem, the sultan had mustered a force estimated at 30,000 regular troops augmented by unknown numbers of volunteers motivated by jihad. The Franks fielded their entire feudal army of 1,200 knights, including about 600 knights from the militant orders and 50 knights from Antioch. Notably, this army included the full contingent of troops from Lusignan’s erstwhile insubordinate barons of Tripoli and Transjordan. The Frankish knights were supported by an equal or greater number of turcopoles and roughly 18,000 infantry.

The Frankish army mustered at the springs of Sephorie, which provided abundant water for the entire force. Saladin led his army along the west bank of the Sea of Galilee to besiege Tiberias. The city rapidly fell but the citizens and garrison withdrew into the citadel, which was held by Raymond of Tripoli’s wife and the hereditary heiress, Eschiva of Tiberias. She sent word to the feudal army requesting relief.

Lusignan called a council of war, as was customary in medieval armies, to discuss the strategy. Although the Lady of Tiberias’ four adult sons pleaded passionately for the army to lift the siege of Tiberias, the Lord of Tripoli recommended caution. He urged the king to send to Antioch for more troops and suggested that meanwhile the army should withdraw toward Acre. This, he argued, would lure the Saracens deeper into the kingdom and expose them to the frustrations of heat, thirst and living off the land.

Such a strategy was totally at odds with the traditions of the Kingdom of Jerusalem. The Franks had either taken the offensive or drawn up their lines of defense as close to the borders as practical. Tripoli’s strategy would also have exposed large swaths of the kingdom to enemy action. Unsurprisingly, the suggestion met with outraged rejection, particularly from Tripoli's inveterate opponents Reynald de Châtillon and the Templar Master Rideford. They called Tripoli a traitor and claimed his advice was designed to benefit Saladin. Consensus was found around a third option: staying at Sephorie and making Saladin come to them across the comparatively arid plateau between the Sea of Galilee and Sephorie.

During the night, however, the Templar Master persuaded Lusignan to overturn the consensus decision and instead to strike out across the barren plateau to relieve Tiberias. No chronicler was in the tent with Lusignan and Rideford. We do not and cannot know what was said or why.  However, we know Rideford was a rash man, who apparently knew only one  command: ‘attack’. Furthermore, he had stolen money deposited with the Temple by King Henry II of England in order to hire additional troops. While this initially gave him greater leverage over Lusignan, it also meant he risked retribution from King Henry. German historian Hans Eberhard Mayer argues: ‘[The theft] could be justified, and Henry’s wrath cooled, only by a spectacular success such as could not be achieved if the army simply sat it out at [Sephorie]….’[i] King Guy was receptive to the Templar’s advice because he had been severely criticized for failing to seek battle in 1183. He seems to have believed a major victory would bolster his fragile standing with his subjects while inaction would damage it further.

At dawn on 3 July 1187, Lusignan ordered the army to advance toward Tiberias. They  took the old Roman road to the springs of Turan, which they reached before mid-day. Military historian John France argues that at Turan the Franks would have been in an ‘unassailable position’ while yet able cut Saladin off, if he tried to move deeper into the kingdom. Had he stopped here, Lusignan would have been acting wisely and within the agreed strategic framework. Instead, he ordered the army to continue onto the plateau.

Saladin thanked Allah. In a letter, Saladin wrote: ‘Satan incited Guy to do what ran counter to his purpose.’[ii] Saladin rapidly sent light cavalry to cut the Franks off from retreat — and the water at Turan. In addition, mounted archers harassed the rearguard relentlessly, causing it to slow down. A gap opened between the main and the rear divisions. Tripoli urged Guy to press forward to reach water at Hattin six miles away. Guy, possibly influenced by the fact that Rideford was with the rearguard, opted to camp where he was — without water anywhere at hand.

During the night, the rearguard caught up to the main force, but no one had any water. Furthermore, they were now surrounded by enemy. The latter lit fires so that smoke tormented the Franks. By morning, morale was breaking and there were some desertions, but the bulk of the army resumed the march. Saladin’s army blocked their way to water whether at Hattin to the north, the Sea of Galilee to the east, or Turan to the West. Wisely, the sultan refrained from attacking until his enemies were further weakened by heat and thirst as the sun climbed higher.

The Franks needed to break through the Saracen encirclement in order to reach water, but all accounts agree Lusignan had no coherent plan for doing so. We know from Arab sources that the Franks undertook multiple charges, several of which were viewed as extremely dangerous and one of which came close to reaching Saladin. A charge led by the Count of Tripoli, possibly on orders from Guy, managed to tear open the Saracen ranks. However, only the Count and a few of his knights escaped before the Saracens closed the gap again, keeping the bulk of the army trapped. Another charge led by Ibelin enabled the escape of a couple hundred knights and maybe 3,000 infantry of the rearguard. Yet, none of these apparently uncoordinated Frankish charges were sufficient to enable the entire army to escape. Eventually, the Christian infantry broke and sought refuge on the slopes of the hills. The bulk of the knights were forced to follow up the slope — a hopeless position without water. Here, they were overwhelmed. The grueling battle had lasted many hours in the burning heat of a Palestinian summer and had been hard-fought, but Saladin’s victory was ultimately crushing.

The king and almost all the barons of Jerusalem were taken prisoner, along with the emotionally and symbolically important relic of the True Cross. There were so many common prisoners that the price of slaves plummeted from Damascus to Cairo. The Christian dead left to rot on the field were so numerous that years later the field of bones still awed visitors. Yet the salient point about Hattin is that defeat was not inevitable. Nor was not caused by factionalism or treason. All the barons mustered and fought at Hattin. They gave their views in council, but they followed Lusignan’s orders. Once they engaged, a massive charge was the only viable option. The Franks made several. It was not ‘treasonous’ when Tripoli and Ibelin partially succeeded, but ‘heroic’ when Châtillon and others failed.

Yet the consequences of this defeat were catastrophic. Because the entire feudal army had followed Guy’s summons, the castles and cities of the kingdom were denuded of troops. Left behind were the elderly, women, children, invalids and clerics. These had no chance of defending cities, and the rules of war were clear: defiance justified slaughter, surrender enabled survival.

Saladin wasted no time in following up on his victory. His army moved immediately for Acre, thereby cutting the kingdom in two. He obtained Acre’s surrender just four days after Hattin. Saladin then split his army in two, sending his brother south with half his forces and turned north himself. He by-passed Tyre as too hard a nut to crack quickly but obtained the surrender of Sidon on 29 July. Beirut resisted and was put the sword on 6 August. Meanwhile, in the south Saladin’s brother al-Adil captured Jaffa on 20 July after resistance, and the citizens were slaughtered or enslaved. Gaza, Hebron, Nazareth, Sebasta, Nablus, Bethlehem, Ramla and Ibelin fell in swift succession. By 4 September, Saladin had joined his brother before Ascalon and the city surrendered to him on terms. Only the great castles in Transjordan and the northern bastions of Belvoir and Safad held out, while just two cities remained in Frankish hands: Tyre and Jerusalem.

[i] Mayer, Hans Eberhard. ‘Henry II of England and the Holy Land,’ in Kings and Lords in the Latin Kingdom of Jerusalem. [Farnham: Variorum, 1994] 737.

The events leading up to the Battle of Hattin, the battle and the aftermath are described in detail in Dr. Schrader's novel 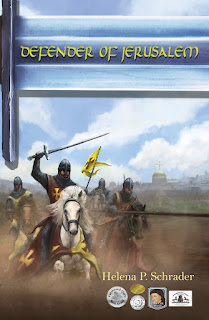