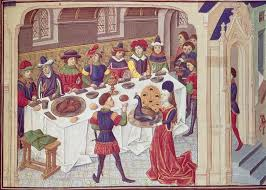 Since Ancient Greece, food has been more than just a means of refueling the human body and become a recognized pleasure. All cultures surround at least some meals with ritual and custom, particularly meals shared with strangers or guests. Most regions have distinct cooking traditions, and everywhere cooks are valued. Medieval Europe was no exception, and most readers will have heard of extravagant medieval feasts featuring game such as beavers and swans or spectacles such as pies full of live birds.


We can assume that people in the crusader states were no exception to this general rule. Furthermore, residents in the crusader states benefited from being in one of the most fertile regions of the world ― no, the Kingdom of Jerusalem was not located in the North African desert used to film The Kingdom of Heaven, but rather occupied the biblical “land of milk and honey.”

Furthermore, like cosmopolitan cities today, the crusader states sat at a cross-roads of civilizations, which ensured a variety of culinary traditions lived side-by-side ― and very likely influenced one another. On the one hand they inherited the culinary traditions of earlier Mediterranean civilizations including invaders from the Arabian peninsula and the Near Eastern steppes, while on the other hand they also enjoyed the cooking traditions brought to “Outremer” by Latin settlers from Northern and Western Europe. That said, I’m going to admit that we don’t have a lot of evidence for exactly what this mix of cuisines actually looked like ― much less how it tasted! 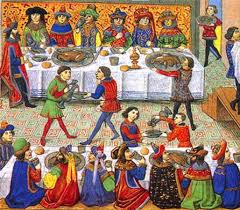 We do, however, have considerable information about what ingredients were available to the residents of Outremer, and this provides a basis for speculating and imagining at least some features of crusader cuisine. Before speculating on the content of crusader cooking, however, I would be remiss if I didn’t mention that the crusader states are credited by some historians (namely Adrian Boas) with an important culinary innovation: fast food.


The large number of pilgrims flooding the Holy City produced a plethora of cheap inns and hostels, places where pilgrims could bed down for the night. However, cheap places to sleep, then as now, did not offer meals, and so pilgrims had to eat elsewhere. A general shortage of firewood meant that not only was bread baked centrally at large ovens (usually co-located with flour mills), but also that “cook shops” producing large quantities of food over a single oven was more practical than everyone cooking for themselves.  The result was the medieval equivalent of modern “food courts” ― streets or markets on which a variety of shops offered pre-prepared food. The results were probably not all that different from today; the area in Jerusalem on which these cook-shops concentrated was known as the market of Bad Cooking ― the Malquisinat.

And now to the ingredients:

The staple of the medieval diet was bread derived from grain, and this was true in the Holy Land as well as in the West. Milling was a prerogative of the feudal elite, and bakeries were generally co-located with mills. In rural areas this was usually near the manor, and in urban areas the bakeries were well distributed around the city for convenience, something well recorded archeologically. The primary grains popular in the Holy Land in the crusader period were wheat and barley, but millet and rice is also recorded, whereby rice was not converted into bread instead eaten by the native population that retained Arab/Turkish eating habits that included the consumption of rice. 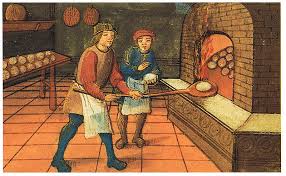 Animal products were the second pillar of the medieval diet, highly valued, and correspondingly exploited fully from the meat to innards. Of the large domesticated animals, sheep and goats were the most common type of livestock in the region, and the Hospitallers recommended lamb and kid for patients in their hospitals. Jerusalem, however, also had a cattle market and a pig market. The latter is particularly noteworthy given the fact that both Jews and Muslims view pigs as unclean. However, a large (Orthodox) Christian population continued to live in the Holy Land throughout the Muslim occupation of Jerusalem, so pigs would have been bred and did not need to be imported. There is also evidence of camels in the crusader states, and camel meat is considered a delicacy in much of the Middle East. However, it is questionable that the Franks adopted the habit of eating camel meat. The camels of Outremer were more probably used as beasts of burden not as food.


Of the smaller animals, poultry and fish, certainly belonged to the crusader diet, the latter being particularly important as meat was prohibited on “fasting days” such as throughout Advent, Lent and on Fridays. In the second century of the crusader states, the population of Outremer was clustered along the coastline, and fish from the Mediterranean would have been plentiful and fresh. This would have represented a great enrichment of crusade cuisine unknown in most of continental Europe, where it was impossible (using medieval means of preservation) to get fish from the catch to the table in a form resembling “fresh.” The Mediterranean yields some of the most delicious fish, including squid and octopus.


Game is the one form of animal, however, that does not appear to have played an important role in the crusader diet. This was probably because population density did not allow for large tracts of fertile land in which game could thrive. Hares are the only exception that I have found (admittedly without in-depth scientific research) and some form of deer (on Cyprus).


Animal products such as eggs, milk, butter, yogurt, and cheese were, on the other, consumed in the Holy Land in the crusader period, the latter being more important than the former. While milk and butter is hard to preserve fresh, cheese is a product with a comparatively long shelf-life. Furthermore, cheese can be produced from cattle, sheep, goat and camel milk. A comparatively wide variety of cheese would, therefore, most probably have been available. Yogurt, being a product used heavily in the Middle Eastern diet, would likewise probably have been known to crusaders, though probably less readily embraced. 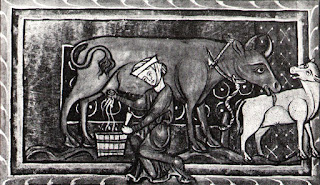 Vegetable varieties in contrast would have seemed limited by modern standards. Legumes were the primary vegetables of the Middle Ages, and in the crusader states the most important vegetables were beans including broad beans, various lentils, cabbage, onions, peas and chickpeas. However, fresh cucumbers and melons were both native to the Levant and formed part of the crusader diet.

Fruits were also a key component of crusader cuisine, and here again the residents of Outremer had ready access to fruits, such as oranges and lemons, that were considered outrageous luxuries in the West, yet grew in abundance in the Levant. Along with typical and familiar fruits from the West such as apples, pears, plums and cherries, Outremer cultivated orchards of pomegranates (particularly around Ibelin and Jaffa). Figs, dates, carobs and bananas were also native to the region and continued in cultivation during the crusader period. But arguably most important of all were grapes, which ― of course ― were eaten fresh and dried (raisins and currants) and pressed/fermented as wine.

Other important trees that yielded important dietary supplements were almonds, pistachios and, most important of all, olives. Olive oil was and is fundamental to Middle Eastern cuisine. It is the primary source of cooking oil, used both as a means of cooking and a supplement for consistency and taste.


And then there are the “additives” that make such a difference to the taste of food: honey, sugar, herbs and spices ― all ingredients found readily in the crusader states. Indeed, refined sugar was one of the main exports of the crusader states, which had many sugar cane plantations in the Jordan Valley, along the coast and later on Cyprus. Honey is also listed as one of the major products of Cyprus during the crusader period. A variety of herbs such as rosemary, thyme, and oregano grow in abundance, but more significant is that many of the spices coveted by the West and only available at very high prices in Europe passed through the ports of Outremer. The coastal cities and Jerusalem had spice markets in which these exotic, high-value products were available in quantities and at prices unimaginable in the West. Thus crusader cuisine would have been enriched by the use of cinnamon, cumin, nutmeg, cloves, saffron, and black pepper among others.


Given the materials the cooks of Outremer had to work with and the inspiration they could draw from their Greek, Arab and Turkish neighbors, I think we can assume that ― despite the presence of some mediocre fast-food joints in the Market of Bad Cooking ― the chefs and housewives throughout the crusader states could produce some truly wonderful cuisine.


Daily life, including cooking and food, is depicted as accurately as possible in my novels set in Outremer: